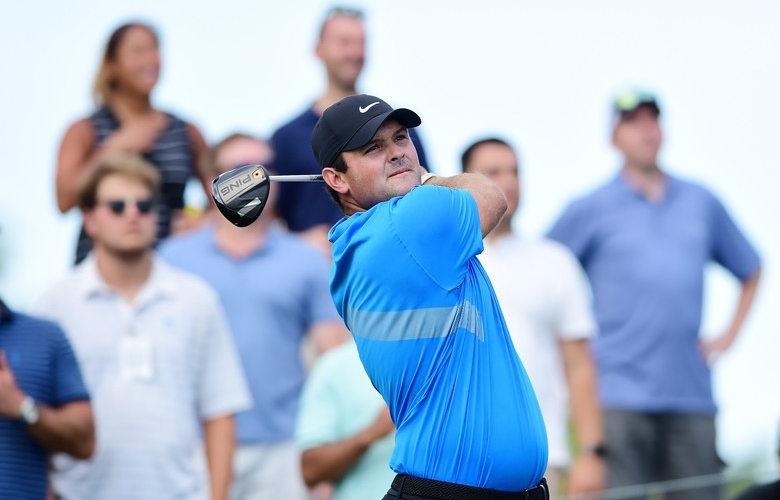 Reed plays his shot from the 8th tee during the final round of The Northern Trust at Liberty National Golf Club on August 11, 2019, in Jersey City, New Jersey. (Photo by Jared C. Tilton/Getty Images)

By Stephen Hennessey
The 14th hole ended up being the difference. The picturesque short par 3 along the water—with the best views of the Manhattan skyline and the Statue of Liberty—was the site of a costly bogey by Jon Rahm, then in the lead, and subsequently a birdie by Patrick Reed in the group behind.

Reed’s birdie at the short par-4 16th hole was enough of a cushion to secure a one-shot victory over Abraham Ancer, locking up Reed’s first PGA Tour win since the 2018 Masters. The victory in the first leg of the 2019 FedEx Cup playoffs at The Northern Trust moved Reed up to second in the FedEx Cup. At Liberty National Golf Club, site of the 2017 Presidents Cup, where the legend of Captain America grew helping the U.S. team to a victory, the 29-year-old might’ve locked up a spot on Tiger Woods’ 2019 Presidents Cup team, too.

“It’s amazing to be back here and be playing some solid golf and for it to pay off,” Reed told CBS’ Amanda Balionis after his win. “It’s been a while, a little too long to be honest. . . . Hearing America and USA all week, it was a great time to get a W.”

Rahm, who started the final round two back of Reed, finished behind Reed by that same margin, despite leading by two shots entering the back nine. The costly bogey at the 153-yard 14th hole, plus another at the 15th hole, where Reed scrambled from the thick fescue to the right of the green for a par, proved to be the deciding margin for Rahm.

A seventh PGA Tour victory for Reed came 16 months after his first major title—the largest gap between victories in his pro career. The results were building for Reed entering the Northern Trust—he had finished in the top 25 in all five consecutive starts, including a final-round 63 last week at the Wyndham Championship. The best result came at an opportune time—putting Reed in a great position for a chance at his first Tour Championship and FedEx Cup title in a few weeks at East Lake.