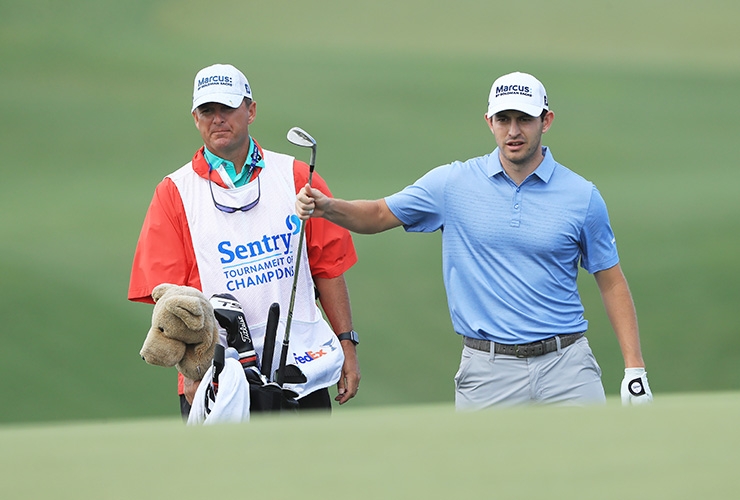 Patrick Cantlay pulls a club as he prepares to play a shot during the third round of the Sentry Tournament Of Champions at the Kapalua Plantation Course on January 04, 2020, in Kapalua, Hawaii. (Photo by Sam Greenwood/Getty Images)

By John Tully-Jackson
Rickie Fowler has already upped the ante for Patrick Cantlay before his Abu Dhabi HSBC Championship debut, not that the World No.6 needs any more motivation. While replicating Fowler’s 2016 Falcon trophy win is an enviable target, Cantlay has another player in the field this week in his sights – world No.1 Brooks Koepka.

“I talked to Rickie. He said he enjoyed his time here. Obviously he won; he told me how great a list of champions this place had, kind of needling me a little bit.”

Despite the good-natured ribbing from his friend, the 2018 Shriners Hospitals for Children Open Champion maintains his laser-like focus on what he is here to accomplish.

“Obviously the goal is to be No.1, and I’m doing everything in my power to prep for events to win, which is the way to get there,” said the 27-year-old Californian.

“You know, for me, it’s pretty much hotel, golf course. I’m here first and foremost to win the golf tournament, prepare my best to do so. On a long travel week like this, it’s hard to get enough sleep. So my priority is really there.”

With two PGA Tour wins under his belt in the last two years, and a strong three-point performance in the recent Presidents Cup U.S. comeback, Cantlay is certainly gathering a good head of steam.

Quizzed on whether he expected to be in the world Top 10 by this point at the start of last season, the former world No.1 amateur remained humble but set out his intentions to hang around.

“I don’t know if I expected to be there. I don’t really think of it in terms of that, but I definitely prepared like I was going there. That’s the plan, and that’s going to be how I continue to prepare for all the events. I think if you show up to every event ready to win and prepared to win, it’s as good as you can do,” said Cantlay who finished 4th at the Sentry Tournament of Champions in his 2020 bow in Hawaii before heading to Abu Dhabi.

Tragedy struck Cantlay in 2016 when his friend and caddie Chris Roth was killed following a hit and run. This kept him away from competition until the following year, and he maintains that he learned from the terrible experience and it changed how he sees not only the game of golf but life in general.

In spite of this life-changing incident, one thing never changed.

“I don’t think I ever wasn’t hungry; so that’s still there. I still really enjoy competing and I really enjoy playing tournament golf. One of the things I enjoy most doing is playing any type of competitive sport, but especially golf.”