Ross Kinnaird/Getty Images
Paratore tees off during the opening round of the 15th Abu Dhabi HSBC Championship at Abu Dhabi Golf Club on January 16, 2020,

By Kent Gray
Having summited the leaderboard early, Renato Paratore and Shaun Norris clearly have designs on staying put throughout the remainder of the 15th Abu Dhabi HSBC Championship presented by EGA. With the world No.1 lurking so ominously, that’ll be easier said than done, of course.

Rounds of 64, both coincidentally blighted by bogeys on the par-3 7th, will see Paratore (pictured above) and Norris (inset) take a two stroke buffer into Friday at the $7 million Rolex Series event. It’s way too early for leaderboard watching but chances are neither will be able to avoid it the way Brooks Koepka returned to competitive golf on The National layout Thursday.

Koepka’s bogey-free 66, matched by Aussie Jason Scrivener, belied the three months he spent on the sidelines recuperating from surgery on his left knee. With four majors and a swag of other top flight wins, the 29-year-old American will clearly have no issue playing the role of hunter.

Both pacesetters at least bring form with them to Abu Dhabi Golf Club. Paratore was second at the Mauritius Open last month and the 23-year-old Italian knows how to win too, even if the world No. 267’s sole triumph came back at the 2017 Nordea Masters. 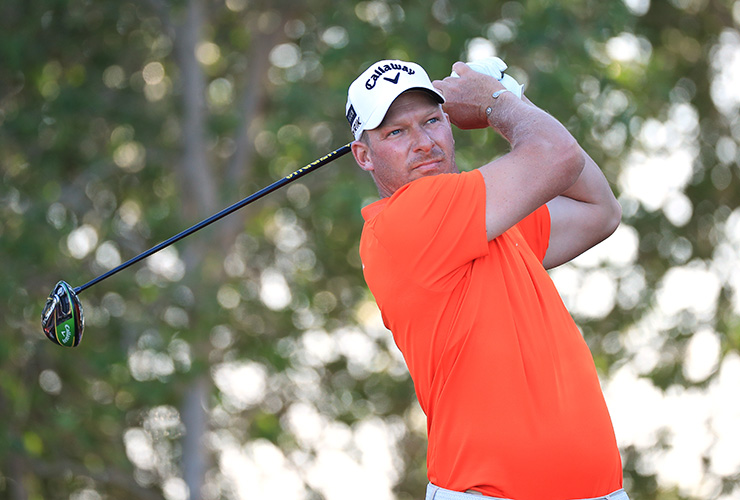 Shaun Norris plays his tee shot on the 17th hole during the first round of the Abu Dhabi HSBC Championship. (Photo by David Cannon/Getty Images)

Norris is still searching for a maiden European Tour victory but the world No.59 is no journeyman, having claimed a pair of Asian Tour wins and two more on the Sunshine Tour – to go with six visits to Q-School. With a win, three seconds and seven top-five finishes in his last 14 starts, mostly in Japan, things are finally looking up.

“It’s been a rough year last year after losing my father. But my brother is back on the bag again and feels like everything is working at moment,” said the 37-year-old South African. “We are having a lot of fun out there, and that’s the main thing. Really happy with what’s happening.

“Who wouldn’t want to win one of these events. To win one of the Rolex Series events to start off the year would be fantastic. I’ll stick to my game plan and just see what happens.”