On what would have been Arnold Palmer’s 90th birthday, the beloved golfer’s spirit lives on 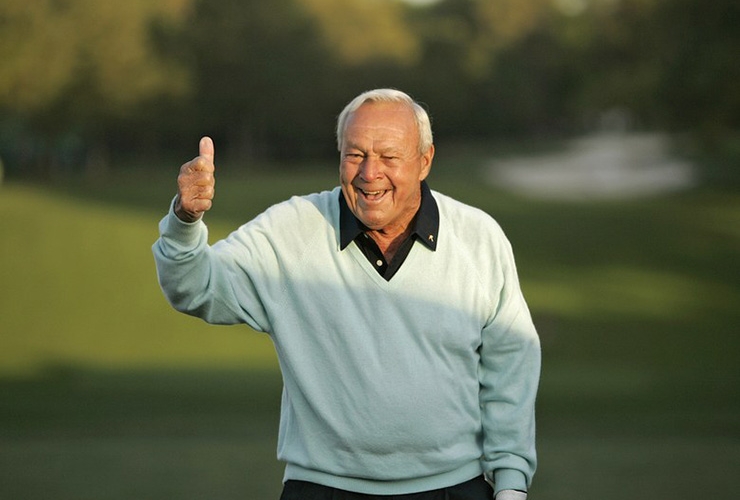 By Dave Shedloski
Bay Hill Club in Orlando and Latrobe (Pa.) Country Club were the twin golf homes of the late Arnold Palmer. In honour of what would have been his 90th birthday on Tuesday, friends, acquaintances and everyday fans of the legendary golfer will gather on the practice ranges of the two golf facilities to hit ceremonial shots at precisely 7 a.m., the time of Palmer’s birth on Sept. 10, 1929.

That’s just one of several events planned to commemorate the life and career of arguably the most beloved figure in golf. Palmer died Sept. 25, 2016, at 87, but his immense legacy as a golfer and philanthropist continues to inspire.

On Sunday and Monday, the Arnold and Winnie Palmer Foundation hosted The Latrobe Classic, which benefits the Central for Fetal Surgery at Arnold Palmer Medical Center. The two-day event featured 18 holes of golf at Bay Hill on Sunday before participants boarded a chartered plane for Latrobe. Another 18 holes followed at Latrobe C.C., where Palmer learned the game while his father for many years served as superintendent and head professional.

A reception followed on Monday night at the club, where former PGA Tour pro and longtime Bay Hill member Robert Damron, now with Golf Channel, sat down with fellow tour player Sam Saunders, Palmer’s grandson, to reminisce on Palmer’s life and his impact on the game. Doc Giffin, who for 50 years served as Palmer’s right-hand man, also was present to offer his remembrances.

Giffin, who served as club chairman for several years, planned to hit a shot Tuesday morning in his friend’s honour. “I’ll swing as hard as I can, which isn’t saying much,” said Giffin, who celebrated his 90th birthday in November.

There will be other gestures both in Latrobe and Orlando, including a choreographed display of 90 lit umbrellas on the athletic field at Saint Vincent College in Latrobe. On a grander scale, the Empire State Building in New York will be lit in Arnold Palmer’s official umbrella colours of red, yellow, white and green in honour of, according to a press release, “the impact Palmer continues to have across the world.”

“My dad always said it was the greatest privilege to give back when possible, and the Arnold & Winnie Palmer Foundation is a testament to that,” said Amy Palmer Saunders, Palmer’s daughter and chair of the Arnold Palmer companies and the foundation. “That the Empire State Building is honouring his efforts with lighting on what would have been his 90th birthday is a tremendous honour, and one that he would have enjoyed.”

Golf Channel is planning a day of programming on Tuesday dedicated to Palmer, who was the co-founder of the 24-hour network.

The Palmer family will mark the occasion privately.

On that score, any visitors to Latrobe will have to be satisfied with seeing glimpses of Palmer’s boyhood golf course. Palmer’s office and the barn on the club grounds that serves as a warehouse for most of Palmer’s memorabilia have been closed for nearly a year.

Now retired, Giffin looks in on the office every so often, just in case. Most everything in Palmer’s office and workshop was as The King left it before he died.

Giffin misses his friend, of course, and he finds that many of his dreams include the man with whom he worked beside for five decades. “I seem to dream a lot more these days, and Arnold is in a lot of them,” he said. “Some of them make sense and some of them don’t. But they’re always good dreams.”