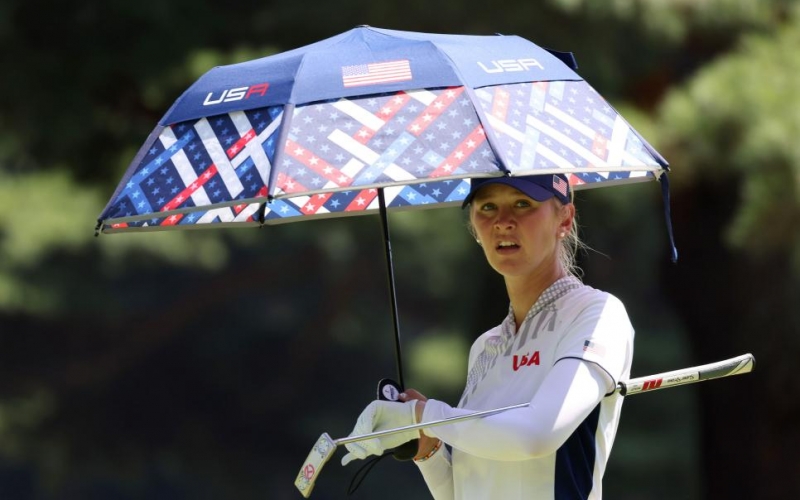 Chris Trotman
Jessica Korda was one of several players using an umbrella to provide shade during Round 1 of the Olympic women’s tournament.

By Ryan Herrington
It was toasty at Kasumigaseki Country Club last week during the men’s Olympic tournament, but not like it was for the opening round of the women’s competition. Temperatures climbed to the high 90s with the heat index hitting 110 degrees as players and caddies struggled to stay hydrated.

“It was definitely probably the hottest I’ve ever been on a golf course and that’s saying a lot. I’ve won in Thailand and I’ve won in Malaysia,” said Jessica Korda, who shot an opening-round 71 to sit five off the lead. “This is a whole another beast of heat when you feel it radiating inside the cups, you know it’s pretty hot out there. So just trying to stay present was the goal today.”

Unfortunately, the weather forecast suggests the conditions won’t let up for the second round on Thursday—97 degrees is the predicted high—with the potential for other problems later in the week. A tropical storm off the coast of Japan is expected to arrive late Friday and produce thunderstorms throughout the day on Saturday—the scheduled final round— and Sunday. The forecast calls for an 85 percent chance of rain on Saturday and 60 percent chance on Sunday.

Due to the pending storms, the tournament committee overseen by the International Golf Federation has sent an advisory to players notifying them that the competition could be reduced to 54 holes. No official decision has been made, as the committee will continue to evaluate the situation during and after the second round.

An alternative the committee explored to keep the tournament at 72 holes was to play more than 18 holes on Thursday and Friday. However, because of the heat issues, medical staffers have advised against that.

The notice is surely important for the field to be aware of as players compete in the second round. In all likelihood, the tournament will be shortened, meaning there’s less time to make up ground if you’re farther down the leader board on Day 1.