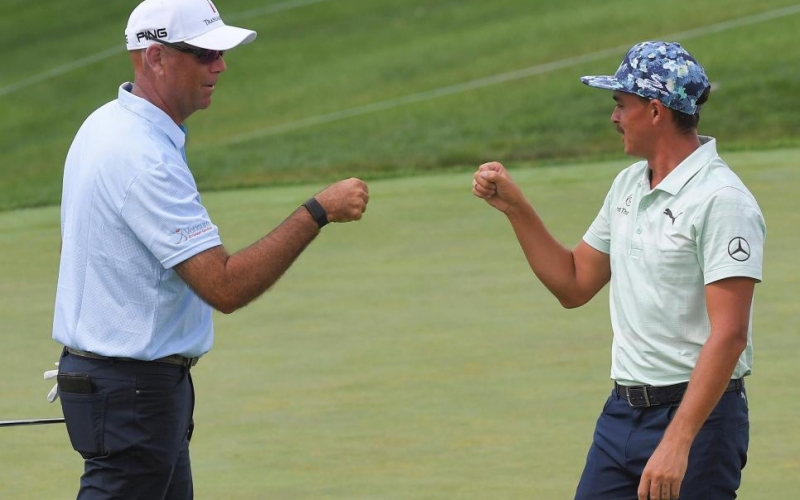 Stan Badz
Stewart Cink and Rickie Fowler bump fist from a distance on the 18th green during the third round of the 2020 Workday Charity Open at Muirfield Golf Club.

By John Feinstein
Brian Gay is keenly aware of the fact that he’s 48. He also knows that he’s competing with players on the PGA Tour who can hit their golf balls into the next county while his don’t come close to the county line. And yet, on Sunday, he found out that he can compete with them—and, on occasion, can still beat them.

Gay came from nowhere—both in 2020 and on the back nine to win the Bermuda Championship, shooting a seven-under-par 64 on Sunday, then beating Wyndham Clark with a birdie on the first hole of a playoff for his first win in more than eight years.

“It’s easy to doubt yourself,” said Gay, who had missed the cut in nine of his last 11 tournaments and trailed Clark by three with nine holes to play. “The players are so good and so young. A lot of them are my daughter’s age.”

The older of Gay’s two daughters, MacKinley, is 21—the same age as Matthew Wolff, who has already won on tour and finished second at this year’s U.S. Open and T-4 at the PGA. Collin Morikawa, who won the PGA, is 23. Bryson DeChambeau is the old man among the tour’s galaxy of young guns—he’s 26.

But while a lot of people are panting—understandably—about the kids, there are still old guys proving they can still teach the kids a thing or two about competing—and about winning.

After the tour’s annual three-day offseason following the Tour Championship, Stewart Cink won the Safeway Classic. This was a story that should have had Disney producers scrambling to start the movie: Cink hadn’t won since the 2009 British Open, when he played the black hat to the white hat of then-59-year-old Watson, beating him in a playoff. Not only had he not won in 11 years since then, he and his family had to endure his wife Lisa’s battle with stage-4 breast cancer, which is just a tad more difficult to live with than a putting slump.

Sergio Garcia’s win at the Sanderson Farms Classic three weeks later may not have been as melodramatic, but it was certainly full of emotion. Garcia hadn’t won on the PGA Tour since the 2017 Masters and he revealed after the round that he had recently lost two uncles to COVID-19.

And now there’s Gay’s victory—his fifth on tour. He hadn’t won since 2013, when he won what was once the Bob Hope Desert Classic under some other corporate name at that time. As a bonus, Gay will get to go back to the Masters—next April—because Bermuda became a full-fledged tour event this fall when the HSBC event in China was cancelled. Gay has played in the Masters only twice—missing the cut in 2010 and finishing T-38 three years later. No doubt he thought his days teeing it up at Augusta were behind him.

John McEnroe, who won seven major singles titles in his Hall-of-Fame tennis career, once said players go through three stages with fans during their careers. “When you’re young, everybody loves you because you’re something new and you’re the underdog, playing against the older guys. Then, when you become a star, people root against you because they want to see the underdog win. And then, when you’re old, they love you again, because you aren’t supposed to be good enough to win anymore.”

Right now, golf is in a period where it has very good players at all three of the McEnroe stages. There are the talented youngsters like Morikawa, Wolff, Victor Hovland and Jon Rahm. All are 25 or under. Then there are the guys just coming into their prime who are already stars: Brooks Koepka, Justin Thomas, Xander Schauffele and DeChambeau come to mind. Jordan Spieth is still only 26. He’s won three majors, and when he finds his missing game again it will be a huge story. The barely into their 30s set includes Rory McIlroy, Patrick Reed, Tony Finau and Rickie Fowler—who doesn’t have the record of a star, but has the charisma and sponsor list of one. Throw in Webb Simpson at 35 and Dustin Johnson at 36. Then come the old guys, one of them being Eldrick Tiger Woods, who will be 45 in December. 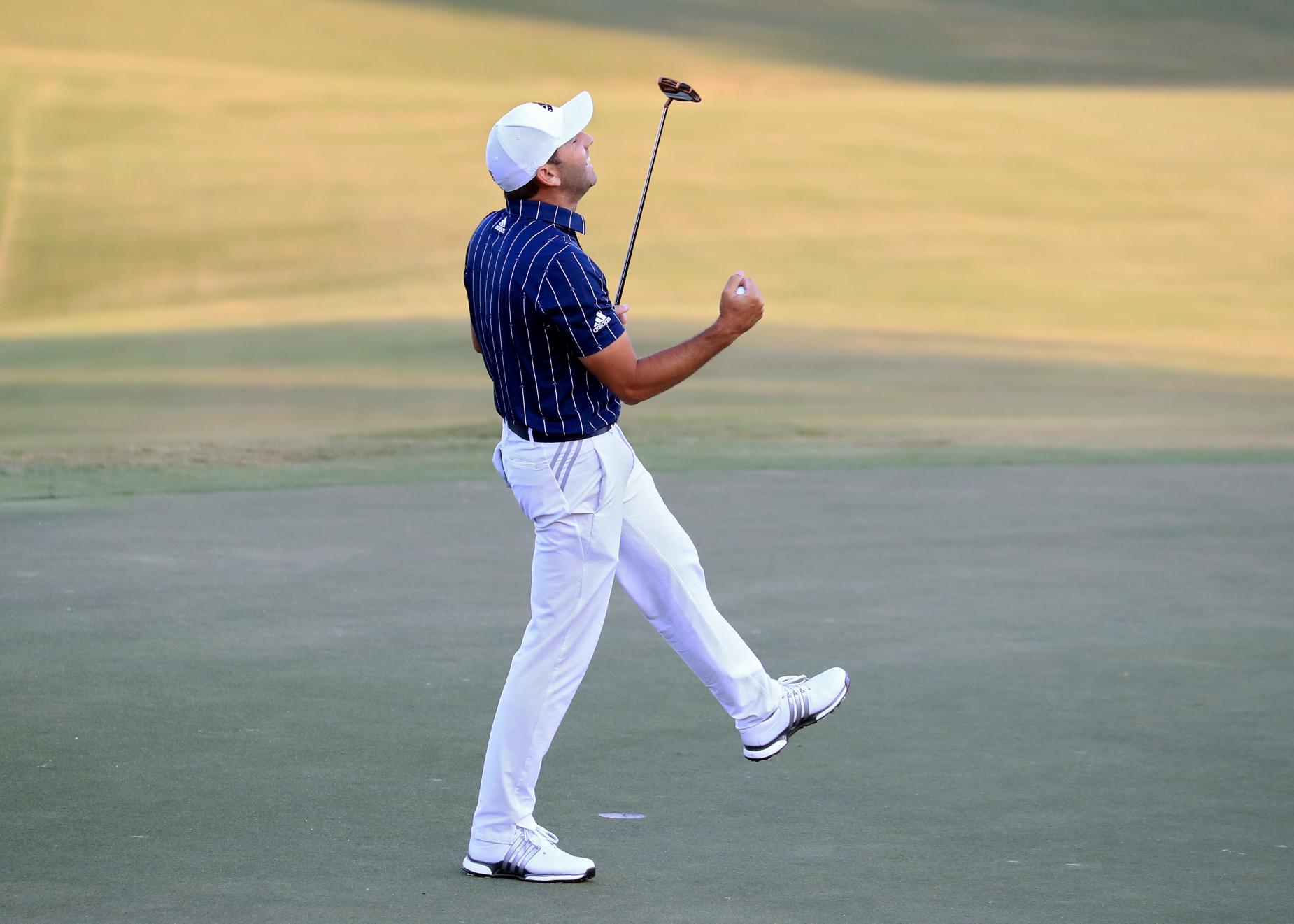 Sam Greenwood
Sergio Garcia celebrates after making birdie on the 18th green during the final round to win the Sanderson Farms Championship.

Woods isn’t close to being the player he was when he was the best in the world—and arguably in history—but he found lightning in a Rae’s Creek bottle a year ago in April to win a fifth Masters and will be the biggest story when the Masters begins next week because he is always the biggest story whenever he tees it up, whether his golf game merits it or not.

And, let’s not forget Phil Mickelson, whose days as a factor on the PGA Tour MIGHT be over at 50, but will undoubtedly make headlines playing with the over-50 set. He’s played twice, won twice on that tour. Knowing Mickelson, he will find a way to compete at least once more either at Augusta or, in another potential Disney movie, at a U.S. Open.

The point here is that golf has probably never been more flush, not just with good to very good to great players, but with wonderful stories.

Morikawa’s victory at Harding Park was something to behold and so was DeChambeau’s victory at Winged Foot, although if he becomes the next role model for young players the average tour round five years from now will be about seven hours. 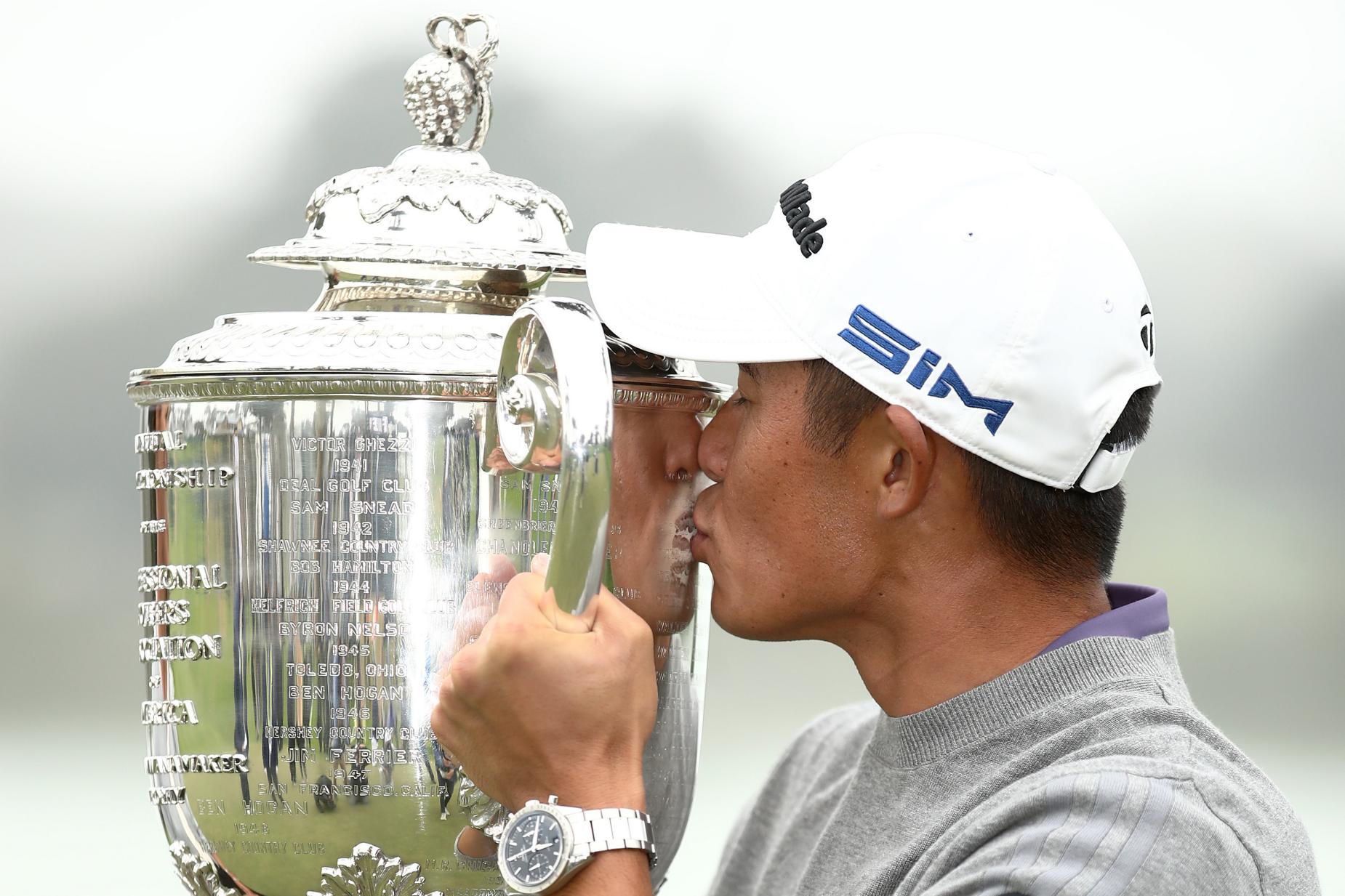 Forgetting the TV executives’ Fantasy Island wishes of a Woods or Mickelson victory at Augusta consider a few possibilities: McIlroy closing out the career grand slam; DeChambeau overpowering the course, forcing the members of lengthen it to about 8,000 yards; Morikawa adding a second major before turning 24; Spieth making a comeback on his favourite golf course; Garcia winning a second major; Koepka finding health and his game; Rahm winning his first major and joining Seve Ballesteros and Jose-Maria Olazabal as Spanish winners at Augusta.

And it isn’t just at Augusta.

Tournament sponsors tend to think they need the biggest names to play to give their tournaments legitimacy and to ensure TV ratings. No doubt stars on the leader board help TV ratings and, even now, all numbers double if Woods is involved.

But there are new stars now—different ones popping up all the time. If you don’t want to see Morikawa play, you don’t like golf. Same for Wolff, Rahm and Hovland. DeChambeau is certainly unique.

Years ago, the PGA Tour put together a series of PSA’s with the slogan, “These Guys Are Good.”

That has never been truer than it is right now. Gay proved it again on Sunday. He beat Clark—who is all of 26, but certainly not too old to date his daughter. He’s not the only one Gay is competing with who can make that claim. All these guys are good—old, middle-aged and young.