Of course, Bryson DeChambeau went full Mad Scientist in explaining his off-season workouts and planning to “bulk up” 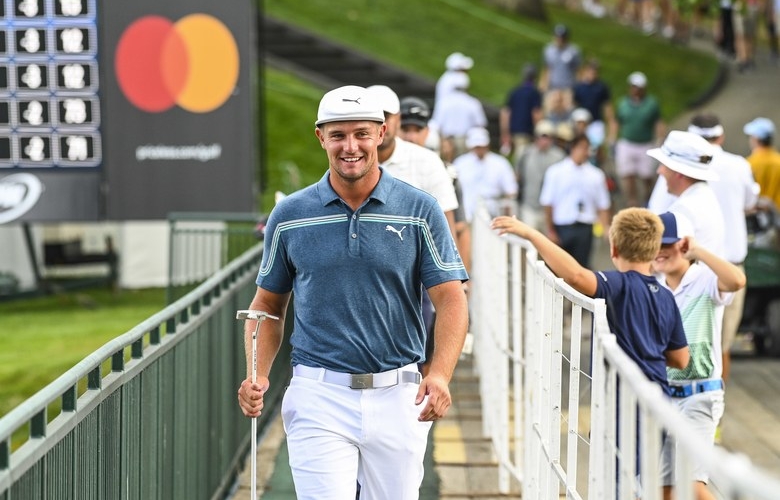 MEDINAH, IL – AUGUST 16: Bryson DeChambeau smiles as he walks to the 17th hole green during the second round of the BMW Championship, the second event of the FedExCup Playoffs, at Medinah Country Club (No. 3) on August 16, 2019 in Medinah, Illinois. (Photo by Keyur Khamar/PGA TOUR via Getty Images)

By Stephen Hennessey
You might not think of Bryson DeChambeau as one of the PGA Tour’s most powerful golfers, but he is. He averaged 302.5 yards off the tee last season, good for T-34. And though he’s not among the top-5 or so most physically imposing guys on tour (we’d take Brooks Koepka or Gary Woodland in a fight), Bryson is 6-foot-1, 205 pounds, and he seems even bigger in person.

His plan, though, is to get even bigger. In discussing his offseason plans with the PGATour.com’s Ben Everill, DeChambeau outlines his plan to bulk up before we see him again.

“I’m going to come back next year and look like a different person,” DeChambeau told Everill. You’re going to see some pretty big changes in my body, which is going to be a good thing.”

You know DeChambeau, dubbed the Mad Scientist by many in golf for his wonky theories on the golf swing, his unusual club specs, etc., has thought this through. And him describing how he’s going to “get swole” this winter is exactly what you’d expect from the Mad Scientist. Here are some more of his quotes to Everill:

“In layman’s terms, pretty much whatever muscle potentially you have, how big and the muscle spindles you have, you can recruit every single one of them to their full potential throughout the whole range and training the whole range of motion.”

RELATED: We spent an afternoon listening to Bryson DeChambeau talk golf . . . and it was something

Wait, what was that? Muscle spindles! We knew DeChambeau was a physics expert, but now he’s dishing out his best biomechanics theories. Is there anything this guy isn’t an expert on?