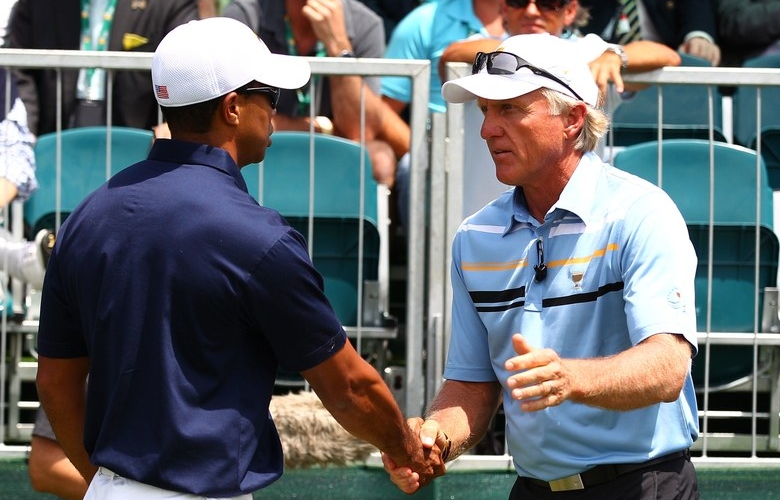 By Alex Myers
Tiger Woods received congratulations from people all around the world following his Masters win in April. But it was a handwritten note from one of his neighbours—and a fellow former World No. 1—that’s now drawing attention nearly seven months later.

In an interview with Men’s Health that mainly focused on The Shark’s incredible fitness level at 64, Greg Norman disclosed he delivered a note in person to Tiger’s house in Jupiter, Fla., after the Masters, but never heard anything back from the 15-time major champ. Here was Norman’s full response:

Yeah, look, I’m happy to clear that up for you. Like, when you ask me a question, I’m going to give you an honest answer. I’m not going to bullshit to you. I’m also going to draw on my experience of the past in terms of what Jack Nicklaus did for me, what Arnold Palmer did for me . . . where there was that respect handed off from the generation before you. It’s a code of conduct in a lot of ways. Very few people know this: when Tiger won the Masters this year, I wrote him a handwritten note and drove down my road, maybe a quarter of a mile, and hand-delivered it to his guard at his gate. I said, “Hey, this is Greg Norman here. I’ve got a note for Tiger – can you please hand-deliver it to him?” Well, I never heard a word back from the guy. When I won my first major championship, Jack Nicklaus was the first person to walk down out of the TV tower and congratulate me. I don’t know—maybe Tiger just dislikes me. I have no idea. I’ve never had a conversation with him about it. I’ve always been respectful about what his father did for him. I played nine holes with him at his father’s and IMG’s request when Tiger was 14 or 15 and I was the No. 1 player in the world, to give an assessment of this kid. So, I have always been willing.

Hmm. A couple of key things to note:

1.) It’s unclear if Woods ever actually received the note. Norman says he identified himself and left the letter with a “guard at the gate,” but there are probably people poking around Tiger’s house all the time. Hence, the guard at the gate.

2.) Norman and Woods haven’t exactly been best buds the past two decades. Hence, why Norman would have to go through a guard at the gate and not communicate directly with Woods.

To the latter point, Norman made Golf Digest’s (very unofficial) Tiger Woods enemies list a few years back. There was a miscommunication over whether Woods would play in Norman’s Shark Shootout in 1996, and Norman hasn’t always had glowing words for Woods in public comments—most notably saying he wouldn’t have picked Woods for the 2011 Presidents Cup and saying numerous times he believed Woods wouldn’t win another major following his scandal in 2009.

In other words, even if Woods received Norman’s thoughtful gesture, it’s not too surprising there wasn’t any subsequent communication. And considering Tiger’s penchant for holding a grudge, Norman probably shouldn’t hold his breath awaiting a reply.