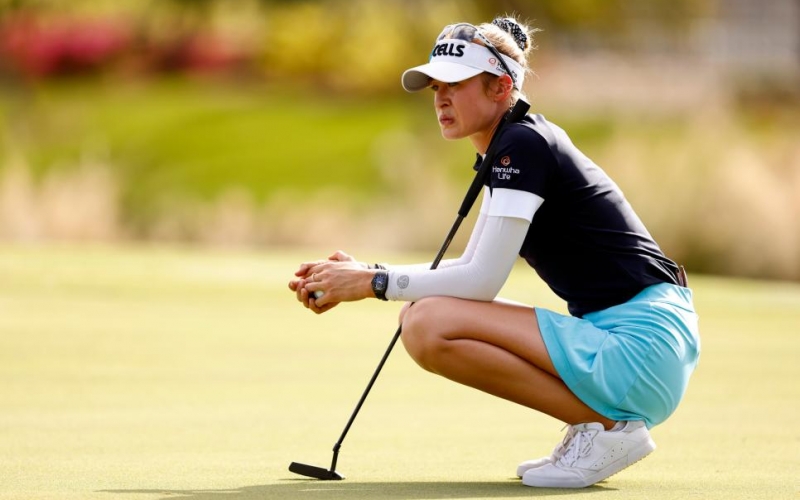 By Keely Levins
In the end, there wasn’t a lot Nelly Korda could do on Sunday at the CME Group Tour Championship. The 23-year-old World No. 1 entered the final event of the 2021 LPGA season with a slight lead in the Rolex Player of the Year over Jin Young Ko. She hoped that a solid performance would allow her to walk off with a fifth tour victory on the year and POY honours, the two tied at 14 under with one round to play at Tiburon Golf Club in Naples, Fla.

And Korda got that solid performance, shooting a three-under 69. But it wasn’t enough to keep up with the eventual champion, Ko shooting a mesmerising bogey-free 63 to be the one walking off with her fifth title and POY.

Ko set the tone early in the final round, playing the front nine in six-under 30 and leaving Korda in the unenviable position of having to make up ground on one of the best players in the world, one who appeared unable to miss a green. By the time she was done with the round, Ko had hit 63 consecutive greens in regulation at the Tour Championship.

“Honestly, it was definitely the ‘Jin Young Ko Show’ today,” said Korda, who finished T-5, six back of Ko. “It was really cool to witness.

“Obviously, I wish I could have kind of given it a better run, but in all, I think I had a great year. So, I’m just going to kind of look back on that and enjoy it. But today was—she just played amazing golf. There is not much you can do. Just sit back and watch honestly.”

The sting of the loss was apparent, but Korda had much to celebrate about her 2021 season. She won four times, including her first major championship title (KPMG Women’s PGA Championship). She also took home the gold medal at the Tokyo Olympics, a victory that didn’t count toward the LPGA POY race, and became the first American to reach World No. 1 since Stacy Lewis in 2014. She had 10 top-10 finishes in 17 starts, missed just one cut and finished no worse than T-28 when she made the cut.

“It’s honestly been crazy,” Korda said. “You know, a lot of people tried to put like the award situation I feel like in my head a little, and I guess sometimes that gets the best of you. You may come out of this thinking, Hey, I didn’t win an award. It wasn’t that good of a year. If I look back, it’s like, Jesus, I’ve done a lot.”

Ultimately, this ending doesn’t undo what was a breakout season for Korda, who will play one more time in 2021, at the PNC Championship with her father Petr.

“I’m very pleased,” Korda said. “It may not seem like that, but I’m pleased.”

The leader of the BMW Ladies Championship went 46 holes without missing a fairway, and didn’t even notice the streak