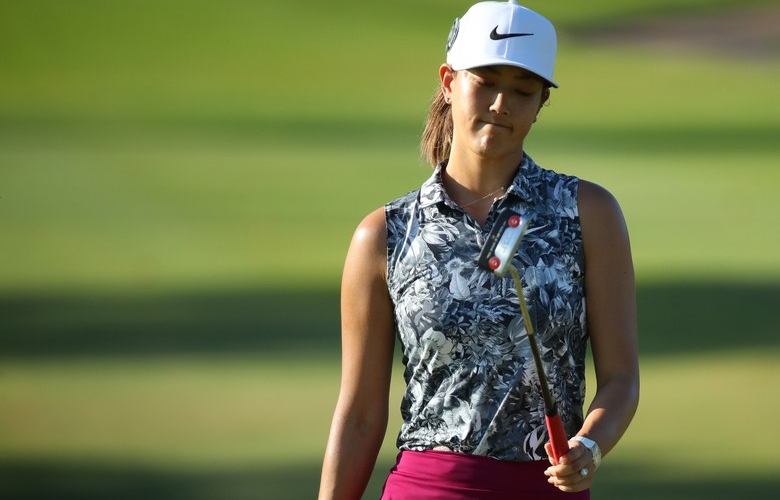 KAPOLEI, HAWAII – APRIL 18: Michelle Wie reacts to a missed par put on the 16th green during the first round of the Lotte Championship on April 18, 2019 in Kapolei, Hawaii. (Photo by Gregory Shamus/Getty Images)

By Keely Levins
Michelle Wie’s 2019 has been one of highs and lows. Highs off the course, as her boyfriend Jonnie West proposed in March. And lows on the course, coming in the form of a persistent wrist injury that once again has her sidelined indefinitely.

Had an encouraging visit with my doctor, however we both think it’s in my best interest to take some time away to allow my body to heal properly and get stronger. Health is my top priority right now and hopefully I can get back to being pain free real soon. Thank you everyone for staying patient with me. I appreciate y’all ❤️

Had an encouraging visit with my doctor, however we both think it’s in my best interest to take some time away to allow my body to heal properly and get stronger. Health is my top priority right now and hopefully I can get back to being pain-free real soon. Thank you everyone for staying patient with me. I appreciate y’all, ❤️

In October 2018, Wie underwent surgery to fix the trifecta of an avulsion fracture, bone spurs and nerve entrapment in her right wrist and hand. She sat out the remainder of the 2018 season—after missing the year’s final two majors before the procedure—with hopes that the surgery would result in a future of pain-free golf. Unfortunately, that has not been the case.

In February, after returning to play in the Honda LPGA Thailand (where she finished T-23), Wie withdrew in the middle of the first round of her second start of 2019, the HSBC Women’s World Championship, where she was the defending champ. She had hoped to return to competition in March at the Kia Classic, but had to pull out of that event in order to make sure she was ready for the first major of the season, the ANA Inspiration. Wie did tee it up at Mission Hills, but missed the cut after shooting 74-77. Wie said that week was still a success. “I feel good,” she said after the first round. “I feel like I can play 18 more holes. That’s a really big win in my book.”

Wie went on to play in the next event on the calendar, last week’s LOTTE Championship in her native Hawaii. She missed the cut after posting back-to-back 77s. Then came her latest post to her social channels about needing more time away after talking to her doctor.