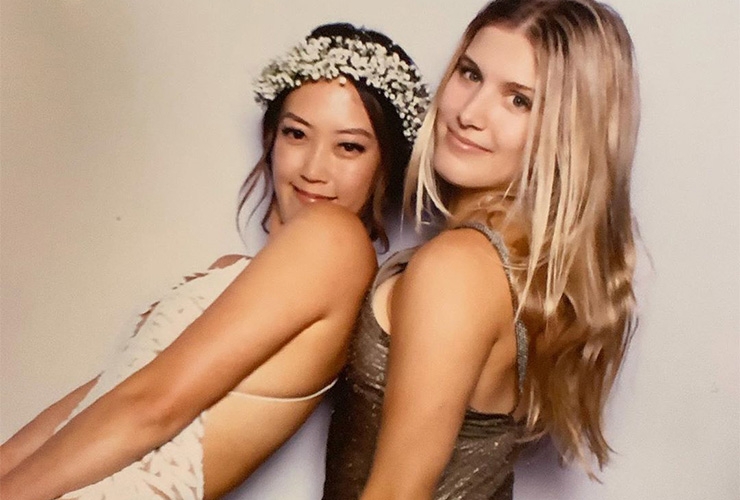 By Alex Myers
Welcome to another edition of The Grind, where we secretly hope the PGA Tour’s slow-play problem never gets solved. Bryson DeChambeau’s dawdling at Liberty National gave us a pair of viral videos, a collection of critical tweets by fellow tour pros, and even a “say it to my face” moment between Bryson and Brooks Koepka, the PGA Tour’s self-appointed Sheriff of Slow Play. Of course, things didn’t escalate beyond that because this is golf, but still, that’s some good content. Thanks, Bryson! Keep up the good slow work! On the other hand, to anyone playing with or ahead of me, please pick up the freaking pace. Anyway, here’s what else has us talking.

Patrick Reed: How about this guy’s timing? For a second time in three years, Reed won his first event of the season at the first FedEx Cup Playoffs event, all but locking up a spot on Team USA for the Presidents Cup in December. Captain America winning in the shadow of Lady Liberty. How PATRIOTIC. 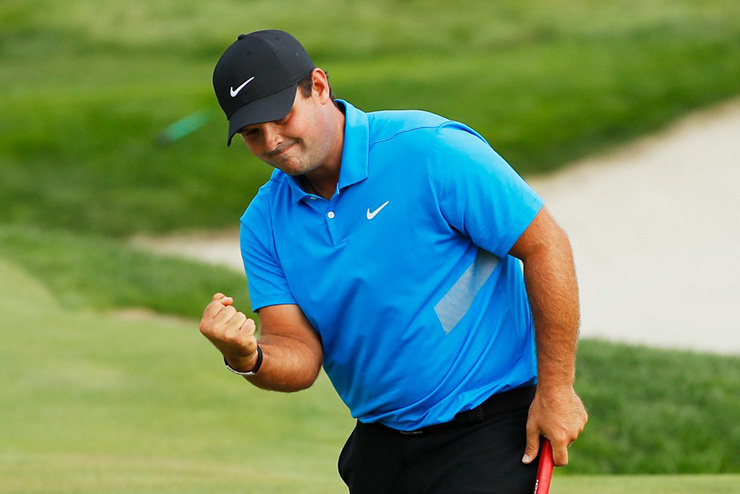 Incredibly, this was also Reed’s first victory since winning last year’s Masters. His seventh PGA Tour title only moved Mr. Self-proclaimed Top 5 back to No. 15 in the Official World Golf Ranking. But it did vault him to No. 2 (from No. 50) in the FedEx Cup standings. If he claims that $15 million bonus, he’ll never have to worry about sitting in the “cheap” seats again.

Scott Harrington: Timing was on this guy’s side, too, as he completed one of the best stories in golf by earning his PGA Tour card for the first time at 38. The accomplishment was made all the sweeter by having his wife, Jenn, in attendance at Pumpkin Ridge a year after Harrington cut his season short when she was diagnosed with cancer. Now Jenn is doing great and so is Scott.

The culmination of an emotional rollercoaster for @ScottyGlf and his family.

His wife Jenn has twice battled Hodgkin’s lymphoma and is now cancer-free. She flew in Saturday night and got to hug her husband on 18 as he heads to the @PGATOUR. pic.twitter.com/6dupdnM3WJ

Congrats also to Bo Hoag on winning the Korn Ferry Tour finale to secure his PGA Tour card as well. As for what happened to Vince India on the final hole, well, we’re not going to talk about that. . . Thoughts and prayers to Vince India. . .

Playing in a pro-am: I had the pleasure of playing in an LPGA Pro-Am four years ago, but as you can imagine, everything is a bit more amplified at a PGA Tour pro-am. The crowds are a lot larger (although, fortunately, my opening tee shot came on No. 10 in front of only a few fans), the SWAG is a lot cooler (I got an early Christmas gift for the wife as well), and odds are (no offence, LPGA), you’re going to get paired with a bigger name. I drew Hideki Matsuyama. You’ve probably heard of him. Decent little player. 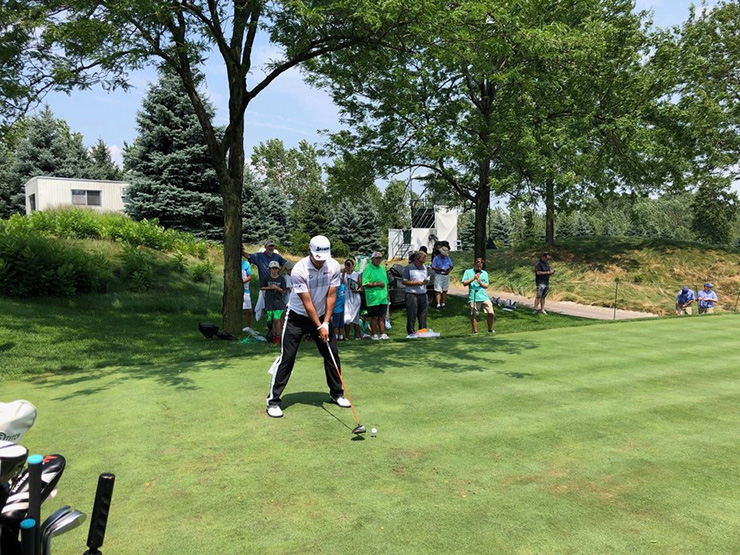 Getting rained out in a pro-am: My only task that came with this plum assignment was finding a different angle to write about than the usual “Playing in a Pro-Am is awesome” (but again, to be clear, it is). And Mother Nature provided just that by bringing a lightning storm that chased us off the course after only three holes. Bryson’s pace of play: On one hand, I feel bad for Bryson getting absolutely torched by the rest of the golf world after a pair of videos exposing his plodding pace of play went viral. On the other, if that’s what needs to happen to bring about change, then so be it. First off, here are the two videos in question:

anyone need a nap?

here’s DeChambeau pacing off a 70-yard shot which took over 3 minutes to hit (couldn’t post the entire video it took so long) pic.twitter.com/7A3Azeftyu

Not good! And here is a sample response from Eddie Pepperell:

Just look at Tommy and Justin, both looking completely bored. Slow players do this to their playing partners making the game less enjoyable. Problem is, the unaffected single minded twit in this instance, doesn’t care much for others.

Again, content! I’m also selling the fact that the PGA Tour hasn’t penalized an individual player since Glen “All” Day in 1995. That’s 24 years ago! DeChambeau was still using single-length diapers!

The Jason Day-Steve Williams Era: The old New Zealand looper was supposed to toughen up the young Aussie and rejuvenate the former World No. 1’s career. Instead, it resulted in a mostly forgettable T21-T8-T66-MC-T40-MC run over six tournaments. Day called the breakup “mutual” and that it was “a disconnect of old school and new school,” which can be summed up perfectly by this photo: 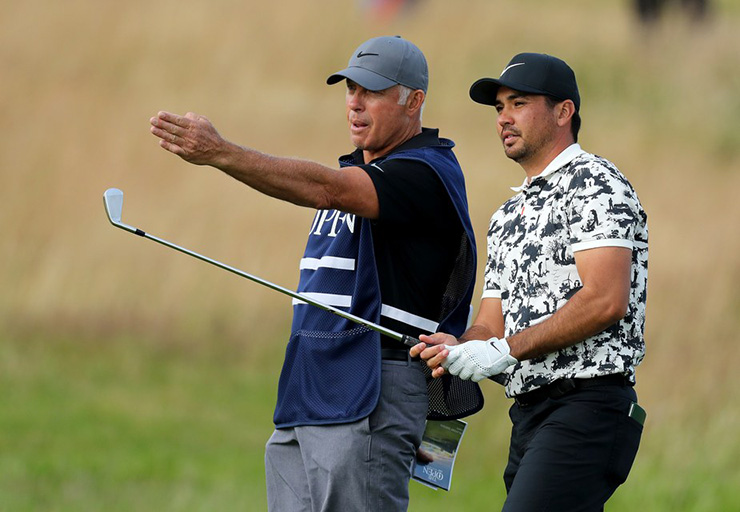 There’s no way Stevie stood for Jason wearing that shirt.

The top 70 in the FedEx Cup standings (including, hopefully, Tiger Woods. We’re going to forget last week’s WD ever happened. . . ) make their way to the BMW Championship at Medinah, AKA that place where Tiger Woods has won two majors and where the Miracle at Medinah happened in 2012. Isn’t it nice when things are so perfectly named? Makes them a lot easy to remember.

Random tournament fact: Medinah is also the site of Sergio Garcia’s running, leaping scissor kick at the 1999 PGA Championship. Sadly, Sergio won’t be here this year because he didn’t advance to the second state of the FedEx Cup Playoffs. Sadly to the fans, that is. The course’s superintendent is probably relieved.

Pick a photo, any photo from Michelle Wie’s wedding to Jonnie West. She Instagrammed 26 (and counting) to be exact:

Then there were other photos posted by guests, including tennis player Genie Bouchard:

SO HAPPY FOR YOU BABY!!!!! You deserve ALL the happiness. ALL OF IT. I’m incredibly proud to call you one of my best friends. When we first met I realized we are literally the same person in different bodies. I love you so much ♥️♥️♥️ PS – Jonnie when you marry Michelle you also marry all of her crazy friends 🤪 So welcome to the family!!! Lmao. Can’t wait to hang out with both of you for the rest of our lives

And Golf Digest’s own Hally Leadbetter:

SEND IT! 🏌️‍♀️ Congratulations to my sis @TheMichelleWie and welcome to the family @JonnieWest4! What an incredible wedding. I can’t wait to watch these two take on the world together. #WieGoesWest

Anyway, congrats to Michelle and Jonnie on looking fantastic and for coming up with a great wedding couple hashtag. And congrats to THE LOGO, Jerry West! 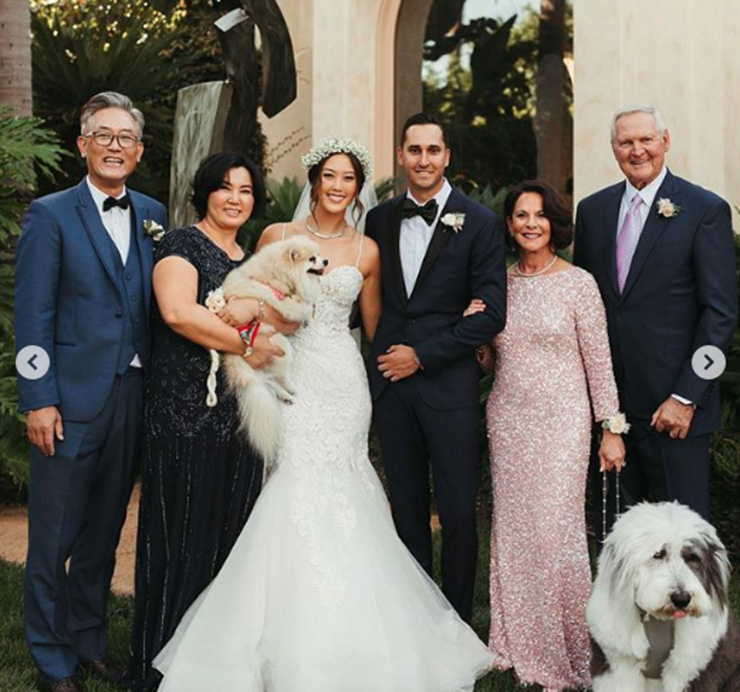 Think their kids will be any good at sports? LOL.

Rory McIlroy delivered quite the random dagger at Matt Kuchar during the Wyndham Rewards awards ceremony:

“Yeah, look, it’s changed my life a little bit. I’m definitely more recognized now, and even coming over here to events, but if anything when you’re like that, it makes you feel more comfortable. That’s the way I feel, anyway. They’re not calling me Beef or they’re not calling me J.B. Holmes out there, anyway. That’s a plus.” — Shane Lowry on winning the Open Championship. That’s a plus, indeed. Beardism is real.

Danielle Kang managed to be at her good friend Michelle Wie’s wedding in LA:

Mr. & Mrs. West ♥️ congratulations to the beautiful couple and what a fairytale of a wedding.. wishing @themichellewie & @jonniewest4 a lifetime of love and happiness ♥️🥰 #WieGoesWest

AND in Oregon to see her boyfriend, Maverick McNealy, earn his PGA Tour card for the first time:

I hiked the Precipice Trail at Acadia National Forest and wanted to share that it is one of the coolest things I’ve done. Hard to explain the beauty and challenge of this amazing trail. pic.twitter.com/9dfc8HuFTf

Then Phil posted this odd video with Bryson DeChambeau (before the slow-play storm hit):

Then he retold a classic yarn involving himself, Tony Romo, and Tiger Woods in front of Tiger (sort of) in his latest Phireside Chat:

The one and only @TigerWoods was nice enough to take time out of his busy schedule to join me on Phireside with Phil. We got to talk about all the times I beat him (one). pic.twitter.com/IPbUufpUKH

Absolutely brilliant. Both the gamesmanship at Pebble Beach in 2012 and the use of Tiger photos to re-tell the story. It’s too bad Phil didn’t start these little chats last year leading up to THE MATCH. Woods would have been happy to actually come on for real to promote that event.

Congrats to Gabi Ruffels for winning the U.S. Women’s Amateur despite her caddie having to leave for a funeral on the 31st hole of the 36-hole final. Congrats to tour pro Ryan Ruffels as well. To say he was proud of his little sister is an understatement.

SHE DID IT US AM CHAMP LETS GOOO pic.twitter.com/50Q3UnH16Q

Congrats to Amanda Balionis for consistently hitting the gym on the road. That takes serious discipline (the only thing I consistently do on the road is eat fast food) and the results are evident by the GUN SHOW she put on at the Northern Trust: Congrats to Chris Naegel for making this hole-in-one:

But condolences to Chris for not winning the BMW on display behind the tee. That’s messed up. . . . And finally, now that my daughter, Julia, is walking, I presented her with her first set of golf clubs: 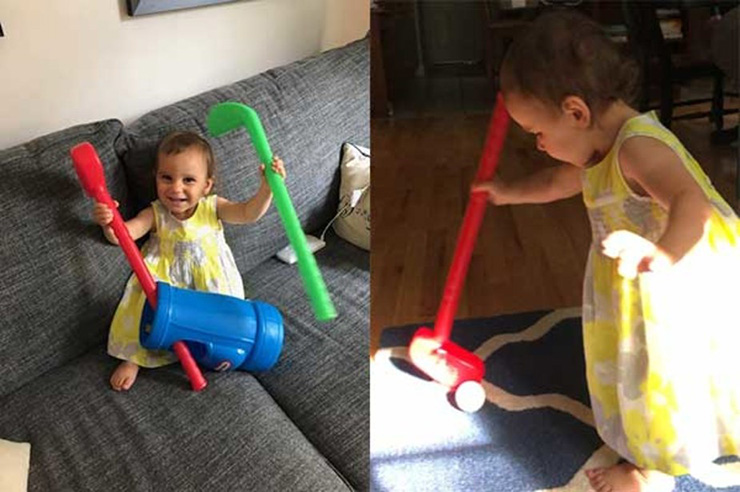 We need to work on her form, but most importantly, I’m doing my part to GROW THE GAME.

Will Steve Williams ever caddie on the PGA Tour again?

Will I ever play in a PGA Tour pro-am again?

When should I talk to my daughter about slow play?