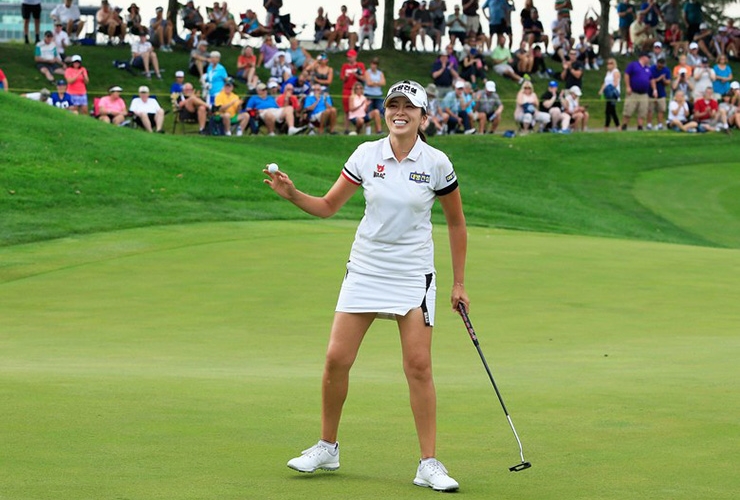 By Keely Levins
Mi Jung Hur knows as well as anyone what it’s like to wait for a win. The lag between her first and second LPGA victories lasted five years (2009 to 2014) and 111 starts. It was another five years and 112 starts before she earned her third tour title earlier this year. Happily, she didn’t need to exercise quite as much patience for a fourth win.

Just seven weeks (and three starts) after winning the Aberdeen Standard Investments Ladies Scottish Open, Hur took the title at the Indy Women in Tech Championship on Sunday. She didn’t just win the tournament, though. She dominated. With a 21-under 267 total—including a closing four-under 68 on Sunday—Hur beat Norway’s Nanna Koerstz Madsen by four strokes and completed the first wire-to-wire victory of her career.

The way Hur sped away from the field was much in line with the nature of the venue. Brickyard Crossing is a unique golf course. The Pete Dye design features four holes inside the Indianapolis Motor Speedway. In the same hypnotic way cars speed around the track, Hur steadily steered her way out front through all 72 holes.

Hur didn’t do much of anything wrong: She hit 78 per cent of her greens in regulation, including 17 of the first 18. Even better than her ball-striking was her putting; she averaged 26 putts per round. 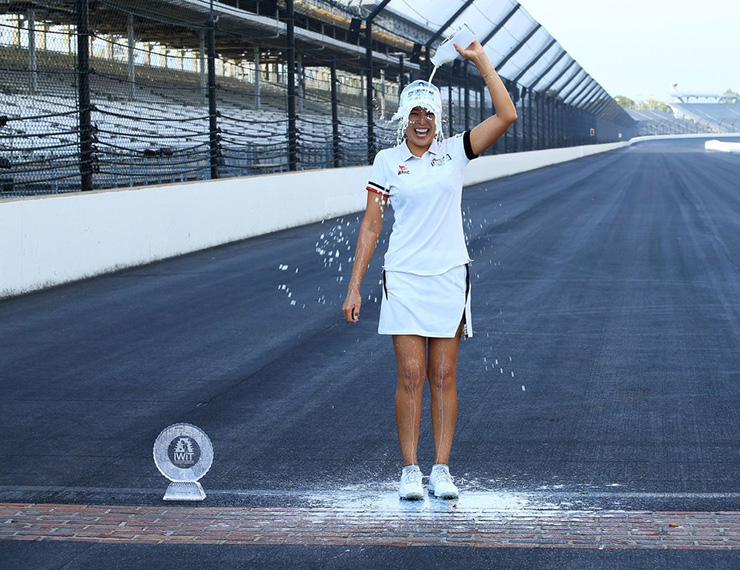 Hur pours milk over her head, following the tradition of Indy 500 winners, at the Indianapolis Motor Speedway after winning the LPGA’s Indy Women In Tech Championship at Brickyard Crossing. (Michael Cohen/Getty Images)

“I’m just trying to enjoy my golf game for the whole year and it’s working really well,” Hur said. “Every day’s not too much stress from my game. I’m so happy.”

Hur has said that her recent success—and positive outlook—stems from getting married in 2018. The 29-year-old South Korean says the new phase of her life helped her gain perspective on her golf game. Finding happiness personally with her husband has translated into finding more joy in golf, too.

“My married life makes me more comfortable, like not thinking [too] seriously about golf,” Hur said after Saturday’s round. “If I hit a bad shot, it’s just a bad shot. Before I got married, I’m like if I had a missed shot, How dare you, MJ. That was so stupid.* But right now, I’m just trying to enjoy my game.”

That’s not to say pressure doesn’t still exist. Hur felt the stress of trying to complete the wire-to-wire win, but the new outlook on golf makes it easier to handle.

Having closed the gap between wins so efficiently in Indianapolis, the question of whether a third victory is possible in 2019 is a fun one for Hur to ponder.

“I just enjoy it,” Hur said after friends doused her with champagne on the 18th green and her husband gave her a congratulatory kiss, “and there will be another chance coming.”