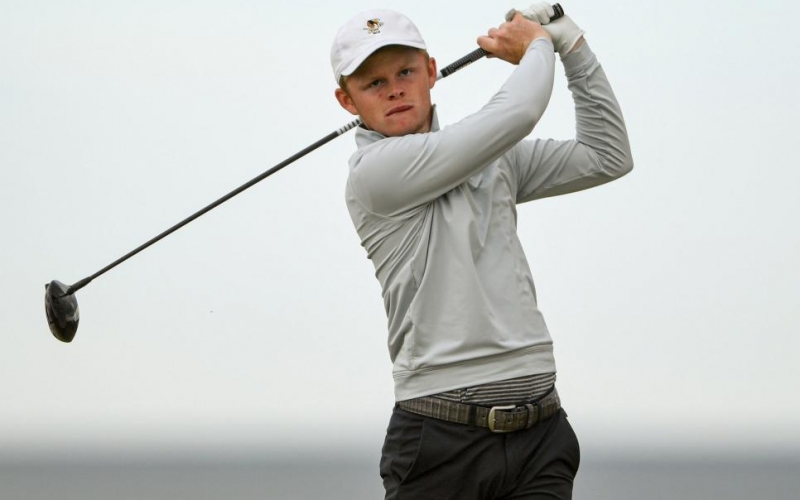 Harry Murphy
Minnesota senior Angus Flanagan will be playing his second PGA Tour event after earning a spot in the field at the Genesis Invitational on Monday.

By Ryan Herrington
Statistically speaking, this week’s Genesis Invitational has the strongest field of any men’s pro tournament to date in 2021. Seven of the top 10 players in the world will be competing at Riviera Country Club outside Los Angeles, along with 30 of the top 50.

And so will Angus Flanagan.

The native of England who plays college golf at the University of Minnesota earned an exemption on Monday into the PGA Tour event by winning the Genesis Invitational Collegiate Showcase. After tying San Francisco’s Tim Widing with a 71 in regulation at Riviera, Flanagan won the playoff on the third extra hole with a birdie.

Angus Flanagan wins with a birdie on the third sudden-death playoff hole pic.twitter.com/oyaydzF6lY

“It’s pretty surreal,” Flanagan said. “Being able to tee it up against the best in the world, players I’ve looked up to … seeing guys out here that growing up, looking up to, having their pictures on my wall, it is surreal. It’s probably not going to sink in until tomorrow morning when I come back out here and I have my player’s badge.”

This is the seventh year the tournament has reserved a spot for a college player and held a Monday competition to determine the recipient. Past winners of the Showcase have included Wake Forest’s Will Zalatoris (2015) and Texas’ Scottie Scheffler (2018).

Interestingly enough, this won’t be the first PGA Tour start for the Golden Gopher senior. Flanagan received a sponsor’s exemption into last summer’s 3M Open outside Minneapolis after winning the Minnesota Golf Champions tournament. While he missed the cut at the 3M, the experience helped propel him to earn medalist honors at the Western Amateur later in the summer. This all came after Flanagan earned college All-American honours in the COVID-19 shortened 2020 season, becoming the first player at the school to do so in six years.

Flanagan is 34th in the PGA Tour University standings, a ranking of college seniors in which the top five will earn playing privileges on the Korn Ferry Tour after the end of the 2020-21 college season. He’s 37th in the World Amateur Golf Ranking and considered a contender to make the Great Britain & Ireland Walker Cup team that will compete in May at Seminole Golf Club after making the 15-golfer practice squad in December.

Rory McIlroy has long been one of golf’s most-respected players and often a voice of reason within the sport. Now his input could have even greater impact.