Meet Simon Corkill, the man now responsible for the delivery of the Omega Dubai Desert and Moonlight Classics 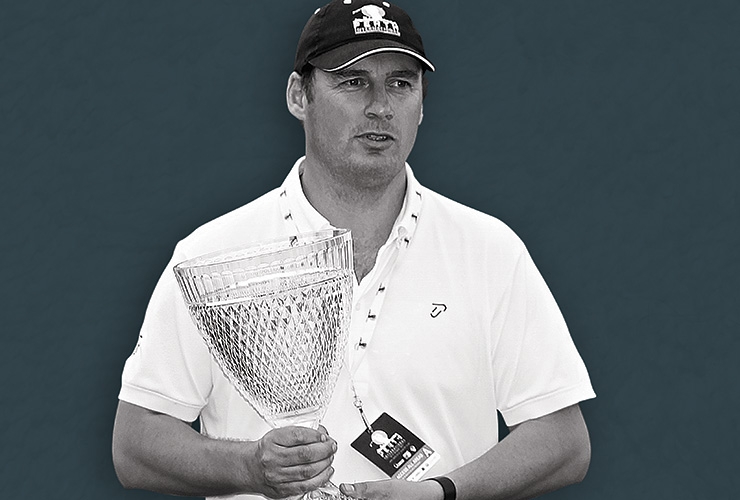 The new Tournament Director of the Omega Dubai Desert and Moonlight Classics has come a long way from picking up litter at golf’s oldest major.

By Kent Gray
It’s Sunday afternoon at the 1987 Open Championship and an audacious 15-year-old, armed with a ‘Quiet Please’ paddle and an unfettered teen spirit, ducks under the spectator ropes at Muirfield. Suddenly the penultimate group of Nick Faldo and Craig Stadler have a new roving marshal.

“No one said a thing as I strode up the middle of the fairway for the last nine holes as Faldo went on to score 18 consecutive pars to win the championship,” says Simon Corkill of his plucky, self-administered promotion after serving numerous less glamourous roles at previous Opens including that of litter attendant. “What a way to witness history in the making.”

Indeed. The tale from the 116th Open, where Faldo would claim the first of his three claret jugs, gives an insight into the character of the man now responsible for the delivery of the Omega Classics: the European Tour’s now 30-year-old Desert Classic and the Ladies European Tour’s Moonlight Classic which will be played under a new Pro-Am format, and floodlights, from May-1-3 on the Faldo course at Emirates Golf Club. Like his Australian predecessor David Spencer, Corkill is a staunch guardian of the game’s traditions but clearly doesn’t mind taking a gamble now and then either.

“I love the integrity of the game and the great values golf still has.”

Born in the coastal Merseyside town of Crosby, educated at famed Rugby School in Warwickshire before graduating from Bristol University, Corkill’s love of sport, and particularly golf, meant his career path was almost predestined.

“I worked at a number of Open Championships when I was a child and student picking up litter, working on scoreboards and running the merchandise outlets. Eventually, I got a break with IMG and I have never looked back.”

Corkill started with International Management Group in 1996 at golf events in London, work that would eventually take him all over Europe and Asia working on European Tour, LET and seniors tour events. He moved to Australia in 1999 to continue working in golf and also at ATP and WTA tennis tournaments in Sydney. During his 19 year stint in Australia, Corkill served as tournament director at the Australian Masters, Australian Open, Women’s Australian Open, Johnnie Walker Classic, Perth International and the Lexus Cup while also assisting with new events in China, India and the first ever PGA Tour Champions event in Asia in South Korea.

A highlight was the 2009 Australian Masters at Kingston Heath where Tiger Woods’ appearance saw the event sold out six weeks in advance, a first for golf in the country.

“The atmosphere in Melbourne that week was electric and people still talk about it. On the Tuesday there were six news helicopters watching his practice round. Tiger went on to win the event after trailing going into the last round with over 115,000 people attending over the week.”

Now 47, Corkill is also proud of his involvement in numerous World Cups and three Presidents Cups, starting in San Francisco in 2009 before 2011 and 2015 editions in Australia and South Korea, the latter complicated when a typhoon ripped through the venue a week before tee-off, damaging a course and city that were already barely ready for the event. 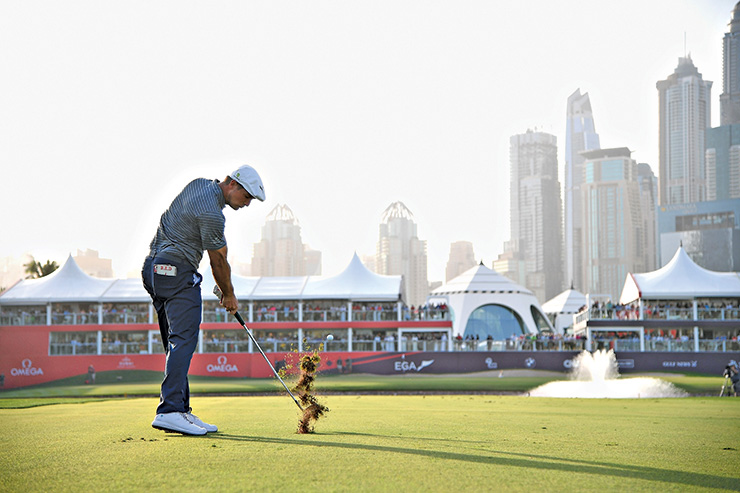 Handover Vision
Corkill officially began his new role with Falcon and Associates on April 1 and will use the 54-hole, $285,000 Moonlight Classic as a handover opportunity and chance to press the flesh with industry leaders before looking ahead to the 31st edition of the Desert Classic.

With wife Amanda, daughters Poppy, 11, and Frankie, 4, and nine-year-old son Rory in tow, Corkill also arrived in Dubai keen to bring is wider sports experience to the table. Among his achievements outside golf was the delivery of the Australian Open of Surfing, a surf, skate, music and lifestyle event that attracts more than 250,000 people to Manly Beach annually.

“I love all sides to sport, the commercial, psychological and marketing aspects especially. For golf I love the integrity of the game and the great values it still has,” he said.

“We are in the entertainment business and as such, we need to continue to build the Desert Classic and make sure that it becomes a week-long celebration, not just the four days of competition. We will continue to invest in on course hospitality and events that attract all types of sport and leisure fans.

“Social Media is also taking over our lives so we need to adapt with the ever-changing times and integrate it fully into the event. We will work with the players to gain more access. It is vital that we continue to promote Dubai as a golfing destination and work closely to maximise this exposure in the telecast.”

Corkill was a invested spectator at February’s 30th Omega Dubai Desert Classic and hailed the “truly impressive” changes made to the hospitality areas adjoining the 9th and 18th greens at Emirates G.C. He admits to having “big shoes to fill with David Spencer’s retirement” but is looking forward to working alongside title sponsor Omega, other stakeholders and key partners such as Chris May and Barney Coleman at Emirates G.C. to grow both the men’s and women’s events.

But that is all in the future. Right now, Corkill’s thoughts on the current health and his vision for the global game hints to the ambition he also packed up along with the family’s possessions for the move to Dubai from Sydney.

“We have a duty as a professional event to push the R&A’s slow play message as well.”

“The European Tour is in good shape especially after the huge success of the Ryder Cup last year. We need to work closely with the Tour to leverage this and make it work for the Omega Dubai Desert Classic as well as the Race to Dubai,” he said.

“The ‘Moliwood’ effect will last until the next Ryder Cup so we need to capitalise on their growing popularity. The European Tour also has some unbelievable talent that will become household names soon.

“On a global scale, golf is becoming cool again with the rise of the young players but never underestimate the more established players as their games are improving with the challenge from the new kids on the block.”

And what about the game’s key challenges?

“Slow play is the biggest issue in the amateur game and initiatives from the R&A need to be implemented at all levels of the game. We have a duty as a professional event to push this message as well. The introduction of the Shot Clock Masters shouldn’t be seen as a gimmick to promote an event…it should become the norm. Great credit to the European Tour for running this event.”

Encouraged by his bold vision for the future, Corkill is prompted to give what his most important strategic move would be if he had ultimate power over the game globally. 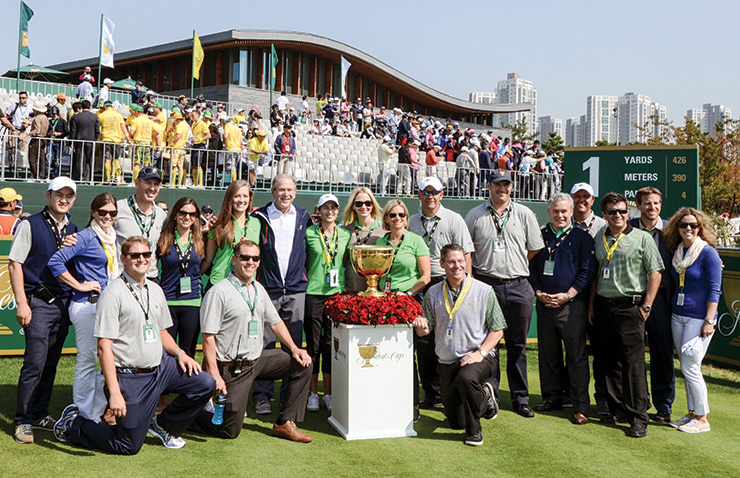 “Golf needs a short form that is engaging, fun and has a purpose. However, I see this hard to do with all the competing tours. A super league of short-form golf is unlikely.

“On a bigger scale, I personally believe the men’s and ladies tours need to come together and create a two-week long World Cup every four years where men and ladies play together in a team competition for their nation. The best players need to commit to it as part of their tour memberships so it is a global spectacular like the majority of other World Cups.

“This would hopefully become the centrepiece of mixed world golf that complements all the majors and traditional events. Ideally, Dubai would be the inaugural host!”

Now there’s a bold idea, just like the chance that daring teen took at Muirfield all those years ago. “Quiet Please” while we give it some more consideration.