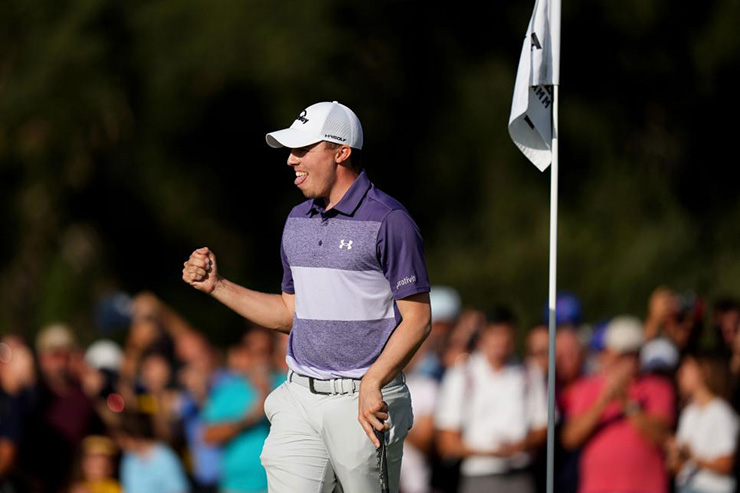 Matt Fitzpatrick celebrates as he putts out on the 18th hole Sunday at Valderrama to secure the win at the Andalucia Masters. Angel Martinez

By John Huggan
Never let it be said that the European Tour does not offer a little bit of everything to players and public. One week after all 75 of the competitors who completed 72 holes in the Spanish Open at Club de Campo in Madrid finished under par (38 of those 10 under or lower), only 14 men ended the Estrella Damm N.A. Andalucía Masters at Valderrama in red figures.

Best of that elite group turned out to be the second highest-ranked player in the field, Matt Fitzpatrick. But it could and perhaps should have been the more unlikely figure of Sebastian Soderberg. The Swede, whose only previous European Tour victory came at 2019 European Masters, arrived on the Costa Del Sol ranked a lowly 169th on the Race to Dubai. In 22 starts this year, Soderberg had missed the cut 12 times and withdrawn once. His best finish was T-26 in the Kenya Savannah Classic. So victory would have meant a lot to the 31-year-old.

But it wasn’t to be in the cruellest of fashions. With two holes to play in regulation, Soderberg was six under par for the tournament and holding a two-shot advantage over Fitzpatrick, 28th in the World Ranking, and another Englishman, 54-hole leader Laurie Canter. Not for long though. As is the norm on the course that hosted the 1997 Ryder Cup, the closing holes proved eventful.

A badly pushed drive off the par-5 17th tee led to Soderberg losing his ball and, eventually, making a double-bogey 7. Seconds after that unfortunate sequence of events concluded, Fitzpatrick made his first birdie of the day—after 15 straight pars—on the par-4 16th to take a lead he would not relinquish. Another birdie at the penultimate hole and a closing par gave the now seven-time European Tour winner a closing 69. His six-under-par 278 total ended up three shots better than the two runners-up, Soderberg (who dropped another shot on the last) and Australia’s Min Woo Lee.

Canter, who finished in a seven-way tie for fourth on two-under par, will also harbour regrets. With 13 holes to play, the 31-year-old still searching for a first victory on the European Tour, was eight under, two shots better than the eventual winning score.

“Winning here at Valderrama, with the history it has, is on the bucket list,” said Fitzpatrick, 27, who earned €489,750 from what was his first start since the recent Ryder Cup. “And to do it bogey-free as well makes it extra special. I’m delighted, especially with the way I did it. I stayed patient all day. I didn’t try to press at all. I stuck to my targets and managed to hole the putts at the end. You can hit half-decent shots here, finish behind trees and have to chip out. It’s a true test. I’m really pleased with how my attitude was over the 72 holes.”

All of which was in almost complete contrast to the less-than chuffed Fitzpatrick who left Whistling Straits last month. Pointless for the second time in the Ryder Cup, the former U.S. Amateur champion was understandably down, despite having played some good golf in Europe’s losing cause. So to win so soon after such a disappointment will clearly be an important boost to his morale. Up to fifth on the Race to Dubai as the year-long contest moves towards its climax next month, he will surely arrive at the season-ending DP World Tour Championship—an event he has already won twice—with renewed confidence.