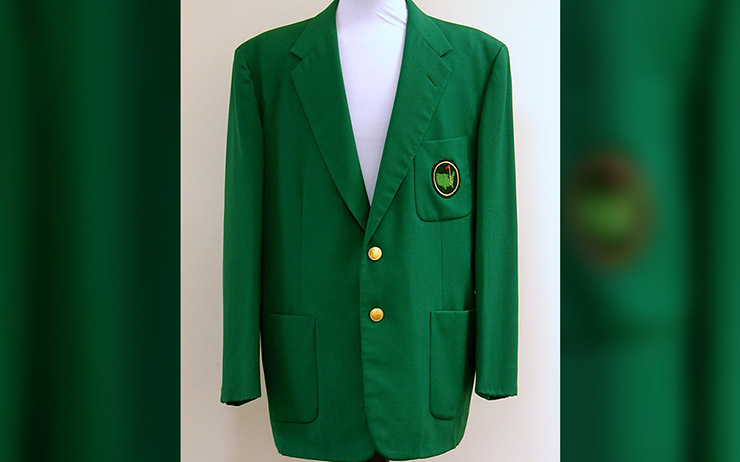 It might have taken Sergio Garcia nearly two decades of trying to get his arms in the legendary Augusta National Golf Club members’ green jacket as Masters champion before he did on Sunday, but it took one enterprising private citizen just one bid to claim a jacket of his own this weekend. That, and nearly $140,000. Green Jacket Auctions put the jacket up for sale as part of a golf-memorabilia auction that ended Saturday.

The firm has put unique golf and Masters items up for bid for more than a decade, including the entrance sign to the club last year. This year’s list of items included Arnold Palmer’s Masters-winning putter from 1964, Sam Snead’s Masters trophy from 1954 and an infamous member’s jacket that reportedly was found in a thrift store in Canada in 1994. According to the Green Jacket Auctions website, the jacket drew 34 bids starting at the minimum of $5,000 and finishing at $139,349. That included 15 bids on Saturday, the final day of the auction. Those offers started at $33,359 before eventually more than quadrupling the final selling price.

Green Jacket Auctions did not reveal the identity of the private bidder that took the jacket at the close of bidding Saturday, only indicating that the buyer was from the United States.

“We are blown away by the interest in golf memorabilia right now,” said Ryan Carey, an attorney who is one of the two principals at Green Jacket Auctions, which was established in 2006. “The golf-collecting hobby has never been so strong. Yet, when you look at golf memorabilia compared to baseball and other sports, golf is selling at a relative bargain. Surely because of this we’re starting to see “smart” money enter the hobby.

Wealthy New Yorkers and international buyers who want the very best pieces are willing to pay what are record prices for the golf hobby because they believe that there is still a great deal of upside with the top pieces of memorabilia.” Carey said the biggest driver in the golf memorabilia surge is Arnold Palmer-related items, “driving prices dramatically higher for his memorabilia, and taking the rest of the market with him. He’s just beloved by so many people. It’s no wonder that his memorabilia is finally getting the respect and the prices that it deserves.”

The six-figure final bid for the so-called “thrift-store Masters jacket” was quite a price, given that its owner said the jacket was acquired at a second-hand store in Toronto for $5. The jacket reportedly dates from the 1950s, and perhaps most famously was photographed by several British golf magazines, including a cover image of English fashion model Jodie Kidd wearing the jacket and nothing else. The final price for the jacket pales in comparison to that reached for a Green Jacket auction of a Masters coat reportedly belonging to Horton Smith, the 1934 and 1936 Masters champion. That auction in September 2013 drew a closing bid of $682,229.

Among the other big sellers from Green Jacket Auctions’ Spring 2017 lot were Arnold Palmer’s putter used when he won the 1964 Masters and later given to a golf club in New Zealand. It went for nearly $98,000.

Also sold was Sam Snead’s 1954 Masters trophy, which at the time was a sterling silver cigar-humidor engraved with the signatures of the event’s participants. Its closing bid was $94,152.

Other notable items: a commemorative Open Championship Claret Jug presented to 2003 champion Ben Curtis and given by Curtis to his caddie went for $40,364.40; Frank Stranahan’s 1954 Masters low amateur trophy sold for $15,562 and a 1935 Masters tournament badge signed by Bobby Jones and Horton Smith drew a closing bid of $9,766, just a tick more than its original price of $2.20. More details on the full Green Jacket Auctions Spring 2017 lot are available here.