Masters: The Biggest Disasters At The 12th Hole 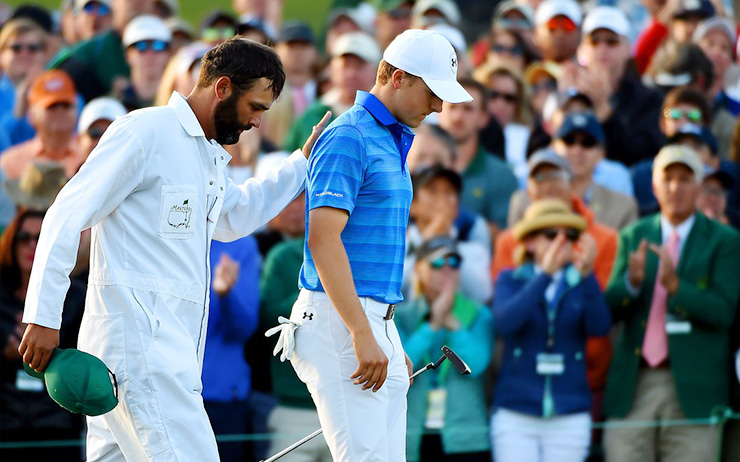 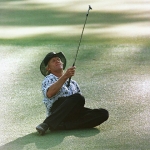 Augusta National’s 12th hole is one of the most scenic spots in all of golf. But the pretty par 3, dubbed “Golden Bell,” is also one of the most dangerous holes in the game despite only playing 155 yards on the scorecard. In the final round of the 2016 Masters, Jordan Spieth saw his chances of winning a second consecutive green jacket disappear there with a quadruple bogey. But Spieth wasn’t the first — and he certainly won’t be the last — to fall victim to a disastrous Sunday score on No. 12. Here’s a look back at some of the other memorable meltdowns that have taken place there. 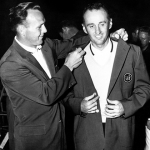 A year after his infamous “plugged-lie” dispute with Ken Venturi on the 12th hole, Arnold Palmer led the 1959 Masters by five shots as he came to the 12th hole. But The King knocked his tee shot into Rae’s Creek and made a triple-bogey 6 en route to losing by two to Art Wall. As you can see, he still put on a good face at the green jacket ceremony. 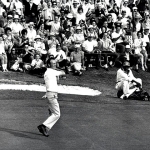 Before Arnold Palmer clinched the win on the 18th hole (pictured), Jack Nicklaus had a rare moment of vulnerability at Augusta National’s 12th hole. Though he played the hole perhaps better than anybody in Masters history, Nicklaus managed to shank one short of Rae’s Creek with his idol, Bobby Jones, looking on from the tee, along with Cliff Roberts. Jack collected himself to make bogey, but Arnie went on to win by two. 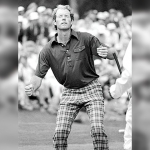 Out of all the disasters at the 12th hole, Tom Weiskopf’s might be have been the biggest trainwreck. Five balls in the water in the first round of the 1980 Masters led to a 13 — the highest-ever score on the hole and tied for the highest in tournament history — for Weiskopf, and another disappointment at the Masters for the four-time runner-up at Augusta National. 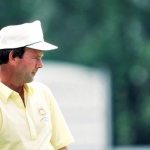 Larry Nelson came to the 12th hole on Sunday trailing Ben Crenshaw by one shot. As Nelson describes it, he hit his tee shot so bad, “I didn’t know whether to tell it to get up or get down.” The three-time major champion’s double-bogey 5 knocked him out of contention, leaving him with a fifth-place finish — his best-ever result at Augusta National. 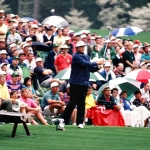 The fate of the 1992 Masters likely rested on the bank of the 12th hole, and though most golf fans know about Fred Couples’ tee shot staying dry, Raymond Floyd’s opposite fortune had an equal effect on the tournament. Floyd hit a similar shot to Freddie in the second round, but his shot slipped down the slope, resulting in a double-bogey 5. The difference between Freddie’s par and Floyd’s double wound up accounting for Couples’ two-shot win. 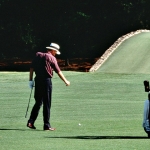 A charge on Sunday put Dan Forsman just one shot behind Bernhard Langer as Forsman approached “Golden Bell” to a standing ovation. Forsman then proceeded to put two shots into the water and make a quadruple-bogey 7 to drop out of the mix. 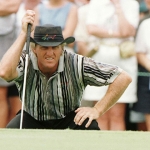 Amid his Sunday slide, the 12th hole marked the first time since Thursday that Greg Norman, who had a six-shot lead entering the final round, did not lead the Masters. Norman’s double-bogey 5 included a tee shot into the water, a day after his ball stayed on the bank at the same hole. Norman wouldn’t lead again, finishing second to Nick Faldo during a Sunday that saw an 11-shot turnaround at the top of the leader board. 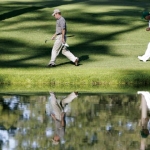 Many golf fans remember Maggert’s golf ball hitting him on the third hole and causing a disastrous triple bogey that dropped him out of the lead. However, most forget that Maggert battled back and only trailed playing partner Mike Weir by a shot – until an even worse catastrophe on No. 12. Maggert found the back bunker with his tee shot, skulled his second into the water, then chunked another ball into the hazard after dropping. Maggert wound up making a quintuple-bogey 8 and finishing five shots out of a playoff. Turn those two disasters into merely bogeys, and he wins by one. 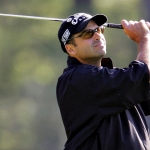 Two years before he tangled with Tiger Woods at Torrey Pines, Mediate had another great chance to win an elusive major championship. He was tied for the lead at one point on Sunday before his bad back flared up on him — and at the worst possible time. Rocco put three golf balls in the water on his way to a heartbreaking 10. Incredibly, those were the only three balls hit into Rae’s Creek that day. 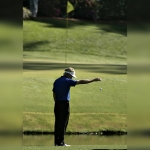 It looked like it would be a long day for the 54-hole leader after he double bogeyed the opening hole alongside playing partner Tiger Woods, but the Aussie regrouped to play the next 10 holes in one under. Appleby was tied for the lead when he reached the 12th tee, but a double bogey dropped him out of the top spot for good. Unable to mount another charge with pars on the final six holes, Appleby finished a disappointing T-7. 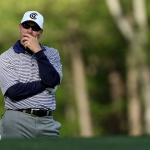 Playing in the penultimate group in the final round, Flesch handled the pressure of the unfamiliar situation well on a difficult day for scoring — until he reached No. 12. Flesch was in second place and just two shots behind Trevor Immelman when he rinsed his tee shot and walked away with a double. Flesch then bogeyed holes 14-17 to shoot 78 and fall to T-5. Still, it was the lefty’s best major finish of his career. 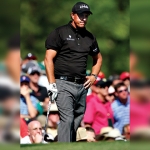 The 2009 Masters finished with a three-way playoff between Angel Cabrera, Kenny Perry and Chad Campbell, but for much of that Sunday, it looked like it would come down to a battle between playing partners Phil Mickelson and Tiger Woods. Mickelson put himself in position for a come-from-behind win after shooting a record-tying 30 on the front nine. But on 12, his 9-iron came up short on the bank and rolled into Rae’s Creek to kill his momentum. He made double bogey and lost by three. 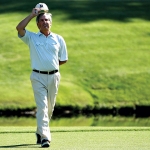 The 50-year-old Couples was still within a few shots of the lead and trying to become the oldest major winner ever when he made the turn on Sunday. But after bogeying 11, he made an even costlier double bogey on 12. He bounced back with three birdies down the stretch, but only finished T-6. Of course, Couples can never complain about anything that happens to him on this hole. In 1992’s final round, his short tee shot miraculously hung up on the bank. Couples got up and down and claimed his lone major title. 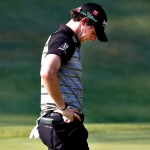 McIlroy entered that final round with a four-shot lead, but it became clear early on that it wouldn’t be his day. A snap hook near Butler Cabin on No. 10 led to a triple bogey and was the biggest blow to his title hopes. But a four-putt double bogey on No. 12 was the final dagger that made him a forgotten man for the last six holes of the tournament. 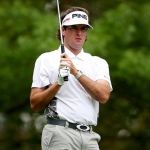 Watson wasn’t in contention, but it was still shocking to see the defending champ post a 10 on the par 3. More incredible was the fact Watson made a 15-footer to keep the score from being higher. On the bright side for Bubba, he returned next year and won a second green jacket. 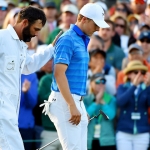 Which is what Spieth will try to do in 2017. Spieth made the turn on Sunday in 2016 with a five-shot lead. But after hitting road bumps with back-to-back bogeys on 10 and 11, his chances at a second consecutive green jacket completely crashed on 12. Spieth found Rae’s Creek with his tee shot, then chunked his drop into the water as well. When it was finally over, he’d made a quadruple bogey that opened the door for a Danny Willett victory.