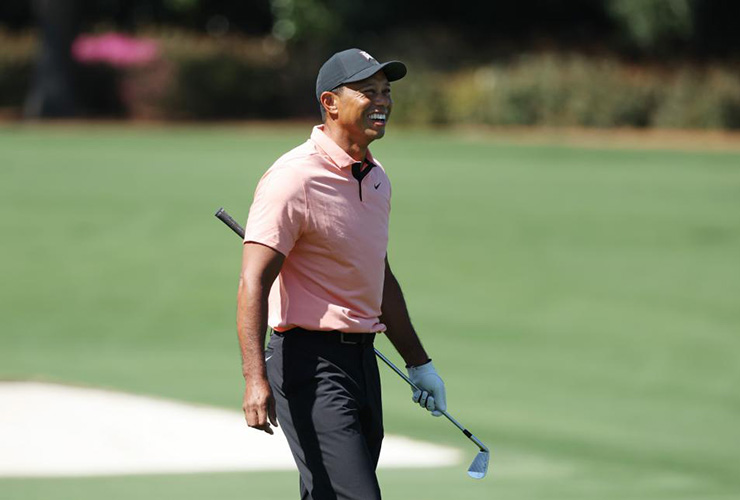 By Dan Rapaport
Tiger Woods arrived at Augusta National on Sunday to continue his preparation for the upcoming Masters, the clearest sign yet that he is nearing a return to competition just 14 months after sustaining traumatic injuries to his right leg in a single-car accident.

He did, however, stop short of fully committing to playing in the year’s first major.

“I will be heading up to Augusta today to continue my preparation and practice,” Woods wrote on Twitter Sunday morning amid heavy speculation over his decision. “It will be a game-time decision on whether I compete.”

Later on Sunday, Woods briefly showed up to the driving range, warming up before heading off to what is believed to be a practice round. The course is closed to the media on Sunday.

Woods, 46, is a five-time Masters champion and 15-time major winner. He suffered comminuted open fractures to both the tibia and fibula bones in his right leg as well as extensive nerve and soft tissue damage when he lost control of an SUV outside Los Angeles in February 2021. He underwent multiple emergency procedures at Harbor-UCLA Medical Center and additional surgery at Cedars-Sinai Medical Center before beginning an extensive rehabilitation process at his home in South Florida.

The first signs of a comeback came in November, when Woods posted a three-second swing video to social media captioned “making progress.” He told Golf Digest later that month that he planned to return to the PGA Tour but on a limited basis.

“I think something that is realistic is playing the tour one day—never full time, ever again—but pick and choose, just like Mr. [Ben] Hogan did,” Woods said. “Pick and choose a few events a year and you play around that.”

I will be heading up to Augusta today to continue my preparation and practice. It will be a game-time decision on whether I compete. Congratulations to 16-year-old Anna Davis on an amazing win at the @anwagolf and good luck to all the kids in the @DriveChipPutt.

The Masters would top any hypothetical list of must-play tournaments for Woods, who has never missed a cut at Augusta National as a professional. It is the site of his first major championship, his historic 12-shot win 25 years ago, in 1997; where he completed the Tiger Slam in 2001; and where he won his first major in nearly 11 years after back fusion surgery, in 2019.

Still, this year’s tournament seemed a long shot given the severity of Woods’ leg injuries. He surprised many by playing in the PNC Challenge alongside his son, Charlie, in December, and generally impressed with his form but walked with a noticeable limp. He rode in a cart on a flat course that week, and the scramble format allowed him to only hit shots he felt comfortable with. Woods insisted that he was a long way from competing at the PGA Tour level and reiterated that stance more recently at the Genesis Invitational.

“I’m a lot stronger than I was [at the PNC], I’m able to hit more shots,” Woods said in February. “But as I was alluding to at the PNC, I was in a cart. I can play weekend warrior golf, that’s easy. But to be able to be out here and play, call it six rounds of golf, a practice round, pro-am, four competitive days, it’s the cumulative effect of all that. I’m not able to do that yet. I’m still working on getting to that point.”

But with each passing day that Woods did not withdraw his name from the Masters field, speculation grew that he could be pushing for a return to competition. Woods was spotted walking his home course, Medalist Golf Club, over the weekend and made a trip to Augusta National on Tuesday to test his surgically rebuilt leg on the famously undulating track. He has said countless times throughout his career that he does not play a tournament unless he feels he can contend, so he must have been encouraged by what he saw during that dress rehearsal of sorts.

Woods has returned after an extended layoff at Augusta National multiple times before. In 2010, he played his first tournament since his marital scandal and tied for fourth. In 2015, he returned from a two-month injury absence and tied for 17th.