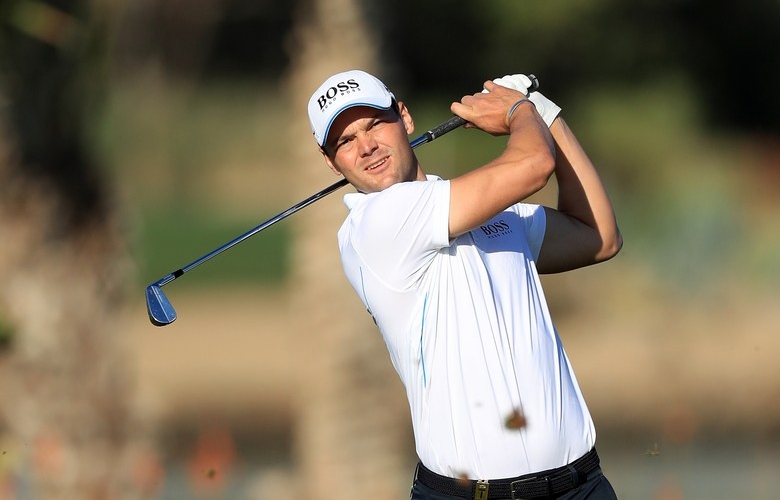 By John Huggan
ABU DHABI — No professional has a closer connection with the Abu Dhabi HSBC Championship than Martin Kaymer, both in terms of the level of success he has enjoyed and in the stunning failure he has endured. Three times a winner in the largest of the United Arab Emirates, the 35-year-old German also perpetrated one of the game’s biggest collapses over the Peter Harradine-designed course.

Ten shots clear at the head of the field after five holes of the final round in 2015, Kaymer shot 75 and finished third. It was a shocking demise for a man who had shown a rare ability to cope with pressure when holing the winning putt at the 2012 Ryder Cup and was, at the time, holder of the Players Championship and U.S. Open titles.

Indeed, the five years since then have been less than kind to Kaymer, who opened with a four-under-par 68 in what is his 14th visit to Abu Dhabi. He hasn’t won anywhere since the 2014 U.S Open at Pinehurst. His membership of the PGA Tour has been and gone on two occasions. As of this moment he is not eligible for either the Masters or the (British) Open. And he arrived in Abu Dhabi this week ranked 127th in the world, 126 places lower than his peak, in 2011.

“That I haven’t won since what happened here in 2015 has nothing to do with this tournament,” Kaymer says. “Some people think it is still in my head. But I don’t have to prove I can win a golf tournament. The challenge now is to see how well I can play. Today I hit four amazingly pure shots. That was so much fun, watching the ball do exactly what I had planned. For me, that is the ultimate success. And it is what I like to focus on. In the end, we golfers are all artists.

“If I had played today’s round a few months ago, I think I would have shot maybe one over,” he continues. “But I was three under. I knew I was playing well. Even after making double bogey on the sixth, I was still thinking I could finish birdie-birdie. And I did. I made things happen by being more relaxed about the results. My belief, my calmness come from my experience. I have a freedom because of what I have already achieved.”

Still, none of Kaymer’s distinguished record mattered last July at Royal Portrush, what was something of a nadir for this enormously likable individual. For a man with two major victories, making the trip to Northern Ireland as a mere alternate was a sobering experience.

“The Open last year was terrible for me,” he says, shuddering. “I was first reserve from Monday on. Which is why I was there. But I didn’t get in. It was so hard. The Ryder Cup is tough to qualify for; only 12 players make it each time. But the Open has so many places. It was difficult not to look around and think, Really? I know all the players did their thing to get there. But come on. I didn’t even know who many of them were. I suffered that week. I couldn’t even go to the range.”

What’s been going on? What has happened? In terms of his golf, where is Kaymer now? And where is he headed?

“I would say I am on the ninth or 10th hole of my career,” he says with a smile. “I am 35, and I have at least 10 and maybe 12 years left at this level of the game. And I’ve spent the last two or three months putting a lot of thought into what I want to do in that time. I have talked with my brother and my father about all of my different options. I’m not married. I have no one I need to take care of. So I am able to focus solely on the things I love to do.”

That’s the big picture. More specifically, Kaymer has spent the last two months working hard on all aspects of his play. And not just, as he has in the past, to no real purpose. This time, he is out there on the range and practice green with well-thought-out schemes in place.

“For too long the quality of my work was not good enough,” he says. “I did not really know why I was practicing. I knew I needed to improve, say, my putting and my driving. But I lacked specific thoughts. I needed to work on things that would then work under pressure in tournaments. But I wasn’t doing that. It was all too vague. I didn’t really know what I should be practicing in all areas of my game. I was a bit up in the air.

“My coach came to Florida with me for the first week. After that I knew what I needed to practice in every department. And that is what I have been doing on my own since then. Now, I have a plan. Before, I did not.”

Always one of the more cerebral members of the professional golf fraternity, Kaymer has also taken a long, hard look at the psychological aspects of his approach, both on and off the course. In essence—and unusually for someone so stereotypically German—he had lost his discipline.

“My mental approach has changed,” he says. “Or at least gone back to where it once was. As I said, I am free to put everything into my golf. I have nothing to worry about away from the game. I had to rediscover what motivates me. I had to find that. I asked myself if I was motivated enough to put in the hours on the range. I had to rediscover what made he happy 10 years ago. It was not becoming No. 1 in the world. It was not winning majors. They were just the results. I was happiest when I was working on things properly. Now, I am doing that again. And that, I think, is what will make me successful again.

“I know I will have some difficulties on the way. But I know also that I can handle that. Because I know I will still be moving forward. Failures can be a good thing. But only when they are part of a bigger plan. For too long, I didn’t have that in place.”

Speaking of which, one other thing has been restored to the Kaymer master plan this week. Craig Connelly, the jovial Scottish caddie who shared in all three of Kaymer’s biggest victories, is back on the bag for a third spell. They have always made a good, if contrasting partnership, a fact the Dusseldorf native is quick to endorse.

“Craig coming back was part of my plan,” Kaymer says. “He makes me happy. He is a very positive person. And he has been with me through a lot—success and no success. Today was interesting. It was our first round back together. And it felt like we had never been apart. He makes me comfortable on the course. I need that, especially where I am right now. I don’t have time for distractions. So he has a big influence on me mentally.

“He does so many little things, things I wasn’t aware of until they were gone. Take the pro-am this week. He entertained the people, doing things that might have taken energy away from me. I appreciate how much he does for me.”

In the midst of so much flux, Kaymer is quick to acknowledge that his presence at an event where he has played so well so often has to be a good place to start anew. In his case, familiarity breeds well-being.

“Expectations are always high here,” he says. “Even when I haven’t won, I have many times finished in the top five. So I have enjoyed a lot of success. But the test for me is always to see this course fresh. It is hard not to think of rounds from the past. The good thing is the course has changed over the years. That helps me see it as something different.

“I always joke about five years ago, saying I have won the tournament three times and lost it once. I really did lose it. It is always said that you learn a lot from failures. But I also think you learn as much from success. I know why I screwed up that tournament. It was such an interesting day. I’m happy that it happened. It was an education. But every time I walk by the winner’s wall at the 18th hole, I think how my name should be there for 2015. Not the other name. But that is how it is.”

But not how, by the sound of things, just about everything else is going to stay for Martin Kaymer.