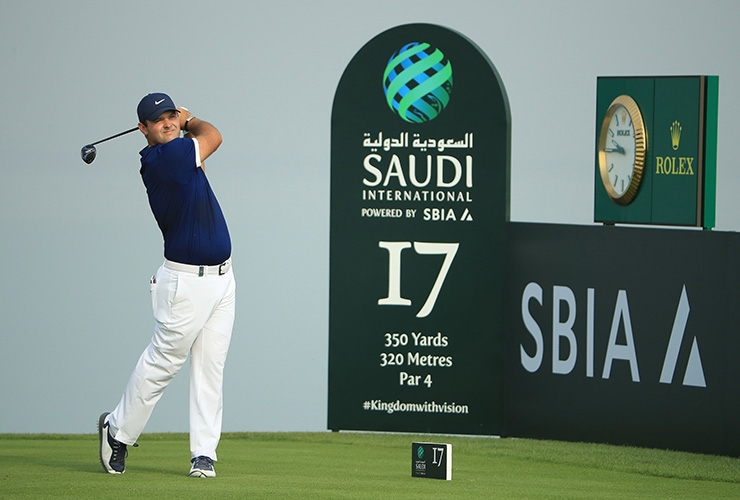 By Kent Gray
Patrick Reed, Sergio Garcia, Henrik Stenson and Shane Lowry have added yet more major championship firepower to the rollcall of stars set to tee it up in the 2020 Saudi International.

All are returnee players other than Lowry with the reigning Open Champion set to make his first appearance in King Abdullah City in a field that ranked the third-highest non-Major event of 2019.

“I loved playing in Saudi Arabia last year,” said Reed, who has represented the United States in the Ryder Cup on three occasions.

“The golf facilities at Royal Greens are world-class and I was honoured to be part of history at the Saudi Golf Federation’s first professional event. I was also lucky enough to be invited to one of the local schools and it was really rewarding to meet the kids and talk to them about golf and what we were doing there that week.

“To see all those school kids come out to the course and watch us play on the weekend was an incredible experience. Golf Saudi is doing a fantastic job of growing the game and I hope I can help further their progress in the future.”

European Ryder Cup stars Stenson and Garcia will return to Royal Greens having both previously captured titles in the Middle East – in Dubai and Qatar, respectively – and are currently ranked 40 and 39 in the Official World Golf Rankings.

Lowry, who will also defend his Abu Dhabi HSBC Championship title earlier in January, has soared to a career-high 19th place in the Official World Golf Rankings, will use the Saudi International powered by SoftBank Investment Advisers to enhance his bid for a maiden Ryder Cup appearance next September.

“I’ve heard a lot of the guys on Tour saying they really enjoyed the Saudi International tournament last year, so I’m looking forward to experiencing it for myself,” said Lowry, who has won five times on the European Tour.

“The golf course sounds like it’s in great condition and by all accounts the hospitality around the event is first class. I’m looking forward to playing there for the first time and continuing the European Tour’s goal of growing the game of golf in new countries.”

H.E. Yasir Al-Rumayyan, Chairman of the Saudi Golf Federation and Golf Saudi, said: “We have a vision for golf to help transform Saudi Arabia and become a premier golf destination. It is therefore extremely important for us drive the game forward both here and around the world by hosting the best players at the Saudi International. Last year we were extremely pleased with the support we received and it will be a pleasure to welcome these four world-renowned major champions to King Abdullah Economic City and Royal Greens Golf & Country Club for the second hosting of the tournament.”