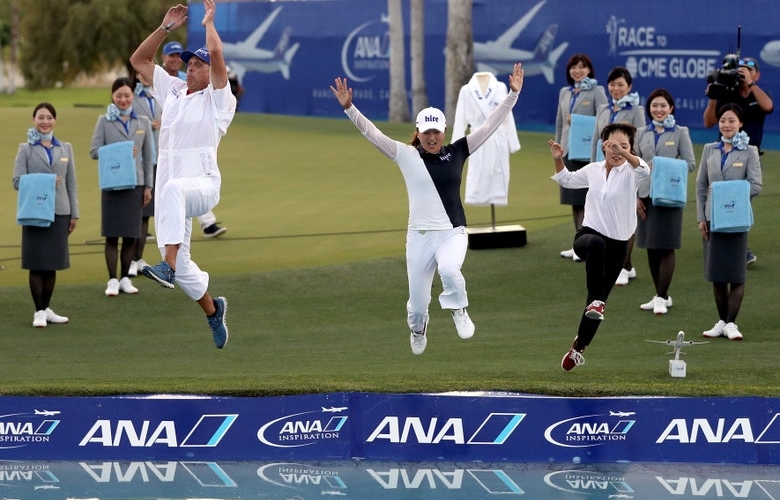 Matthew Stockman
RANCHO MIRAGE, CALIFORNIA – APRIL 07: Jin Young Ko of Korea, her caddie David Brooker, and her agent Soo jin Choi, leap into Poppie’s Pond next to the 18th green after her win during of the ANA Inspiration on the Dinah Shore course at Mission Hills Country Club on April 07, 2019 in Rancho Mirage, California. Photo by Matthew Stockman/Getty Images)

By Keely Levins
It was inevitable that the LPGA Tour would announce another wave of tournament postponements due to the coronavirus, having previously only addressed events through early April. But the tour offered a bright side to its Friday announcement that three more tour stops were on hold: the 2020 ANA Inspiration, previously postponed, has a new date.

What is ordinarily the first major each year on the LPGA calendar, and was previously supposed to be held April 2-5, is now scheduled for Sept. 10-13 at Mission Hills Country Club in Rancho Mirage, Calif.

In conjunction with the announcement, the Cambia Portland Classic, originally scheduled for that week in September, will be played the following week.

That said, the soonest the LPGA will return to action now is mid-May after postponing the Lotte Championship in Ko Olina, Oahu, Hawaii (April 15-18), the Hugel-Air Premia L.A. Open in Los Angeles (April 23-26), and the LPGA Mediheal Championship in Daly City, Calif. (April 30-May 3).

“We held out on these events as long as we could, hoping conditions would improve,” LPGA Commissioner Mike Whan wrote in a letter to LPGA players on Friday. “Unfortunately, the current combination of the World Health Organization categorising COVID-19 as a pandemic, local markets implementing very aggressive event/gathering limitations, and unprecedented, broad-scale travel restrictions that impact so many of our players and caddies, made hosting an LPGA official event under these conditions simply not possible or prudent.”

Whan previously had to cancel three tournaments in Asia due to the coronavirus’ presence in China, Singapore and Thailand. Then last week he and the tour announced the postponement of the Founders Cup, Kia Classic and the ANA.

With these further cancellations, the tour’s unexpected break extends to 12 weeks. The last LPGA event played was the ISPS Handa Women’s Australian Open, which concluded on Feb. 15.

“As you can imagine, we are busy working on dates [and other changes] for postponed events,” Whan told players. “Assuming we get some relief from the COVID-19 issues soon, it’s pretty clear that the rest of the 2020 seasons will be quite busy and crowded. We are focused on giving you as many playing opportunities as we can. I will share more details about the back half of 2020 as soon as I can.

“The truth is, every time I think we’ve made a plan to address changes, it never seems to be ‘long enough.’ I wish I could tell you when the LPGA Tour will resume our schedule, but the truth is, no one has those answers.”