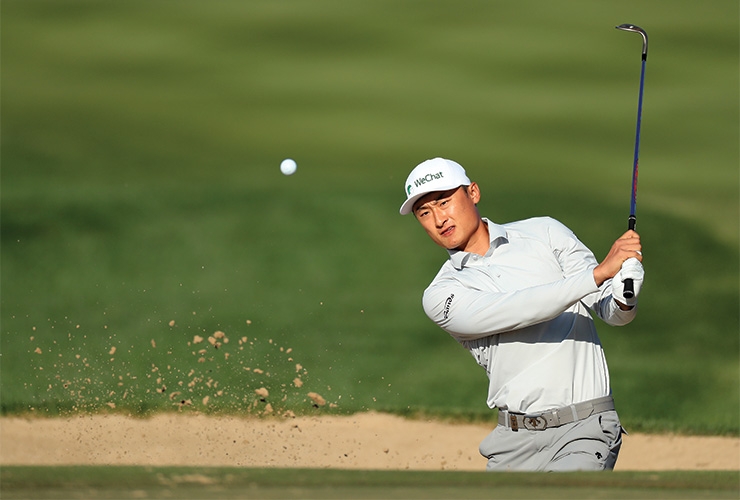 David Cannon/Getty Images
Haotong Li plays his third shot on the 14th hole during the second round of the Abu Dhabi HSBC Championship on January 17, 2020.

By Kent Gray
With his broken English, transcribes from Haotong Li interviews promise two things: the answers will be short and sweet and, more often than not, leave you wanting more from one of the most interesting characters on the European Tour.

It‘s not hard to decipher what the Chinese star is trying to say but you’d love a bit more meat on the bone to do his best rounds justice, a deeper personal insight to give added colour to all the red on his scorecard.

A bit of statistical research helps to fill in the gaps where quotes from other players articulate the day’s proceedings but be careful, there can be holes in first-hand facts from Li too.

Like how the 24-year-old said on Friday he thought he’d missed the cut at the Abu Dhabi HSBC Golf Championship the past three years. Turns out it’s not as bad as Li thought – he’s only missed the weekend the previous two years. The good news is there will be no repeat in 2020 with Li right in the mix for a third European Tour title at the 15th Abu Dhabi HSBC Championship after rounds of 67-69.

The ever-smiling Chinese pro has a particular liking for desert golf, if not Abu Dhabi Golf Club until this week. He won the Dubai Desert Classic in 2018 and was runner-up to Dustin Johnson at the inaugural Saudi International last Feb. Li’s year nosedived after he finished fourth at the China Open (the event he won for his maiden European Tour title in 2016) with just one other top 15 following since May last year. But plenty of grind on the range with his coach seems to have the world No. 69 back on track.

“Yes, I did a lot up-and-down, and short game has been improved a lot. I think that’s how I get this result,” Li said after his second round 69 and just two bogeys in his opening 36 holes left him at -8, just two shots off Francesco Laporta’s halfway lead.

“I’ve been work very, very hard, and especially with my coach and whole team, and change management company, as well. It’s a lot of change this year, but glad to see everything works.”

The goal now is to kick on, hopefully this week but definitely this year as he looks to return to the top-50 of the world rankings to get himself back into all the majors and World Golf Championship events.

“Yes, for sure. This is my biggest goal for sure and just want to play solid like this, and I think I will be back soon.”