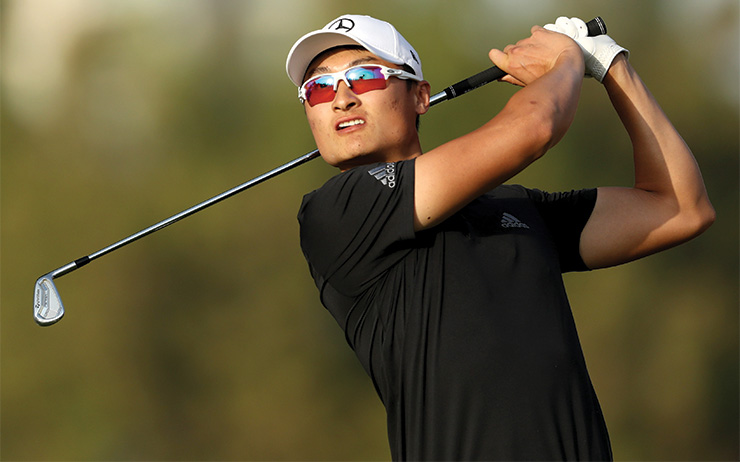 By Kent Gray
He began three behind, quickly surged two clear and eventually finished a stroke adrift.  At the end of it all – and there was a lot to take in elsewhere – Rory McIlroy was right back to where he started as the player to beat in this utterly absorbing Omega Dubai Desert Classic.

After a sizzling 64 to get to -20, Haotong Li will start Sunday entirely capable of closing out the €3 million European Tour event. You only have to rewind to last summer’s Open Championship and the 63 that propelled him to solo third at Royal Birkdale for proof of the Chinese star’s closing qualities, or the 64 that landed the Volvo China Open in 2016.

But Li’s one stroke cushion over McIlroy is far from a comfy one even if the Northern Irishman couldn’t quite keep up his early heroics on a breathless moving day that had spilled over from Friday’s fog delay.

Five birdies in his seven second round makeup holes early Saturday saw McIlroy sign for a 64 and overtake Jamie Donaldson atop the leaderboard. There weren’t the same fireworks in a third round 68 although a homeward nine negotiated in 32 strokes, sparked by an eagle at 10 and closed out with two birdies in his final three holes, ensures the world No.11 takes ample momentum into the final round.

“Hopefully that’s the bad one out of the way,” McIlroy said afterwards.

“I didn’t get off to too bad a start, just a couple of loose ones. Missed a short one on 4 and made bogey on 8. That wasn’t too good. But to come back with a five-under back nine was good. It was good to knock that birdie in at the last and stay within one of Li.

“I’ll probably need to play a bit better tomorrow to win, but you know, it’s two weeks into the season and I’ve given myself a second chance to win a tournament. Looking forward to tomorrow.” Rory scrambles from a bunker.

He’s not the only one. Alexander Levy is in an ace position, quite literally, after a 65 that included a hole-in-one on the 4th and seven birdies. The Frenchman had that could of, should of feeling too after back-to-back bogeys at 15 and 16 stalled his Saturday charge.

Haydn Porteous is also at -17 after matching Levy’s 65 and the South African is not immune to winning as his D+D Real Czech Masters victory last season and 2016 Joburg Open triumph illustrate.

A best-of-the day 63 has 2016 Ryder Cupper Andy Sullivan back in familiar territory at -16 after a lean 2017, a shot clear of Englishman David Horsey who has been clinging onto the coattails of the ridiculously low scoring all week.

But for starters on Sunday at least, the focus will be on the 12.43pm two ball of McIlroy and Li. The latter was modest when asked how he fancied his chances of snaring a second European Tour title.

“Well, I’ve never been this this position before, so it’s going to be fun out there tomorrow. Hopefully I can do my best and have some low scores,” Li said.

The best of Li Haotong's flawless third round 64 ?#ODDC18 pic.twitter.com/wvWU7Bzs28

“He was very good, very solid,” McIlroy said of Li. “Drives it well. Hits his irons well. He putted very well, actually. He holed everything he sort of needed to so I know that if he continues to play like that, he’ll be tough to beat tomorrow.”

For all that, McIlroy insists he has plenty in reserve after consigning the third round 68 to “not a true reflection of where my game is at”.

“It would be great to put my name on that trophy for a third time. This is one of my favourite tournaments of the year, a place I’ve always done well at, some good memories. Maybe that experience of winning a couple of times around here, being in contention quite a lot, will help me tomorrow.”

Li and co. can’t say they haven’t been warned.