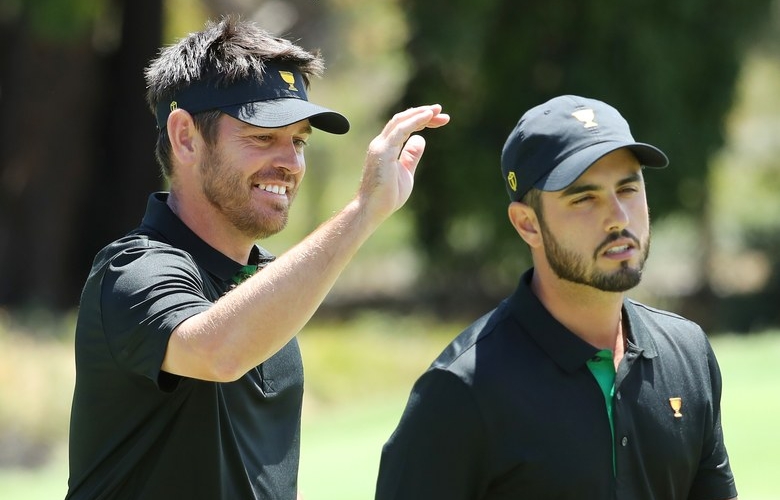 Warren Little
MELBOURNE, AUSTRALIA – DECEMBER 12: Louis Oosthuizen of South Africa and the International team congratulates Abraham Ancer of Mexico and the International team after his putt on the 13th green during Thursday four-ball matches on day one of the 2019 Presidents Cup at Royal Melbourne Golf Course on December 12, 2019 in Melbourne, Australia. (Photo by Warren Little/Getty Images)

By John Huggan
MELBOURNE — Many times during any year pitting Dustin Johnson and Gary Woodland against Louis Oosthuizen and Abraham Ancer would be a match with only one result. In a card game, a pair of U.S. Open champions invariably trumps an Open champion and an Australian Open champion.

Not right now, though. Not at this Presidents Cup. Not at Royal Melbourne, as the International pair of Oosthuizen/Ancer showed with a convincing 4-and-3 victory over their American opponents.

So a shock scoreline, right?

Think about it. On one side we had a man, Johnson, who had not played competitive golf since August. And on the other stood a world-class player—Oosthuizen has been runner-up in all four major championships, as well as lifting the claret jug in 2010 at St. Andrews—who only last week made an eagle on the 72nd hole en route to finishing second in the Australian Open.

This was no surprise. Not to International assistant captain Geoff Ogilvy, anyway.

“Louis is a master at this format,” said the 2006 U.S. Open champion, a native Melburnian. “He loves it. He’s the clown on the bus. Everybody loves him; he fires everybody up. And Ancer is our little secret weapon this week. He’s fired up and ready to go. He’s cocky and confident, and he wants to take them all on. So it was great for all the other guys to know that ‘up the back’ they had a pair they could rely on.” 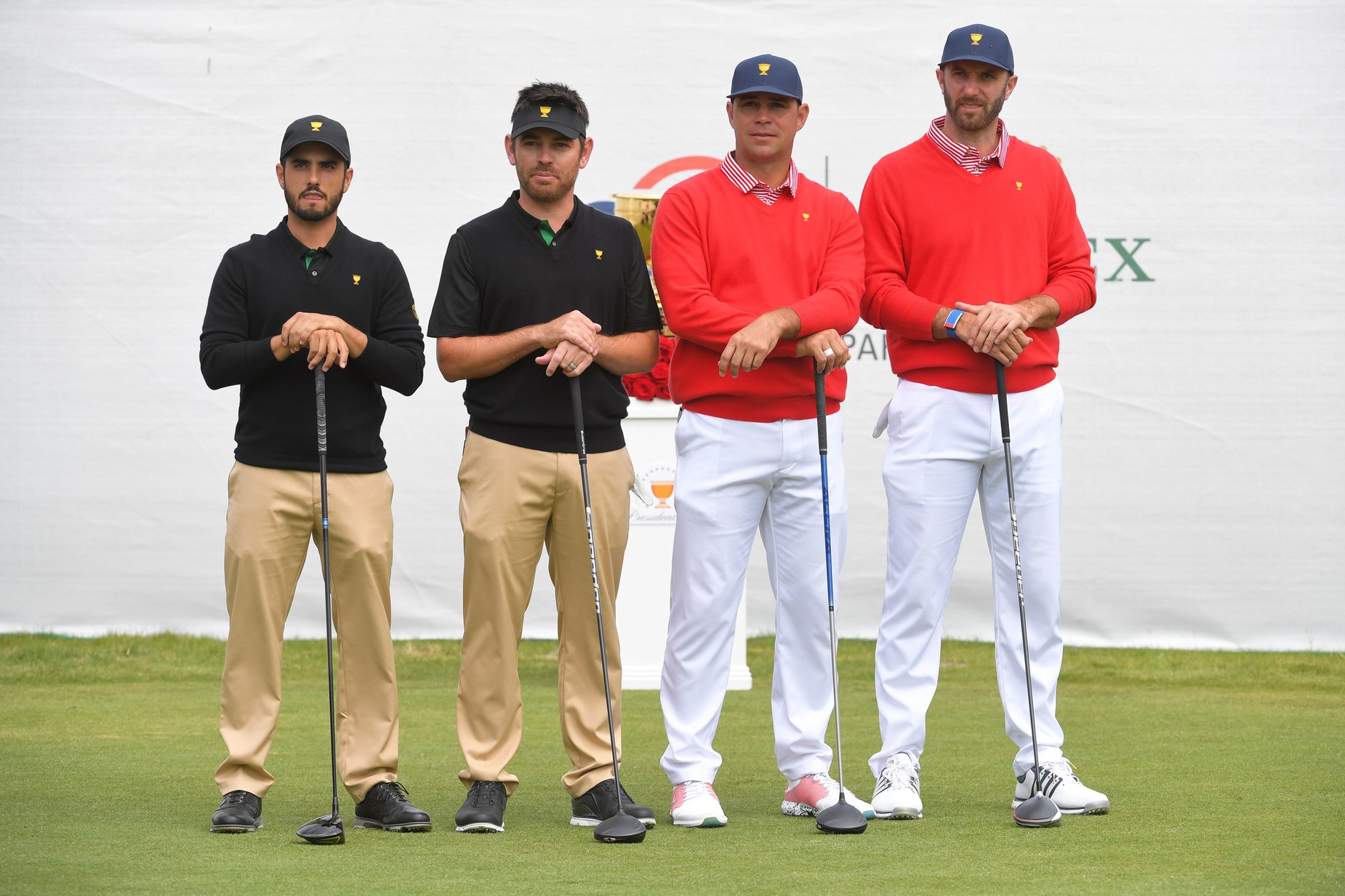 Stan Badz
Ahead of their Thursday’s Day 1 tee time, Ancer and Oosthuizen were ready for their match against Gary Woodland and Dustin Johnson.

That much was obvious early on. After an opening par, three birdies and a par on Nos. 2-5 by Oosthuizen, ostensibly the senior member of the International partnership, won all four holes and went a long way toward determining the final outcome. Never less than 3 up thereafter, the game was all but over by the turn and over for sure by the 15th green.

Those bald statistics don’t tell the whole story, though. America calls it “ham and egging,” the art of having at least one player involved in every hole. In Australia, “pie and chipping” might be more appropriate. Whatever, Ancer did most of the heavy lifting after his partner’s blistering start. From the sixth hole onward, eight times his score was the one counting for his side.

“We have a great bunch of rookies on the team,” Oosthuizen said. “I’ve said this a few times: They are in great form. Watching them in practice rounds, we ‘senior’ boys were just trying to feed off their energy. It was the same today. I was just a passenger in a car watching Abe playing unbelievable golf. It was fun to see him, how motivated and focused he was on the course.”

Still, Oosthuizen’s contribution did not die on the sixth tee. Ancer was quick to acknowledge the continuing benefit he felt from his partner’s encouragement and experience.

“It was truly a pleasure playing with Louis,” said Mexico’s first Presidents Cup player. “We do feel like a team out here, which is key. I was nervous, but he made it feel easy out there, which is not easy. This is a very tough golf course. But we had a plan, and we kept to that really well. I felt good out there, which gave me confidence. And I made some putts.”

That last bit is the most important of course. Holing out well has always been the key to winning matches, or at least making things difficult for opponents. All of which sounds a lot like what the Internationals—epitomized by Oosthuizen and Ancer—achieved on Day 1 of the 13th Presidents Cup.