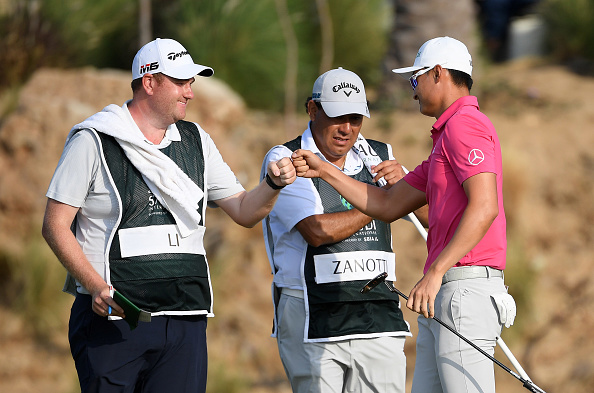 By Kent Gray
Haotong Li’s peers were incensed when the Chinese trailblazer was handed a two-stroke penalty for an iffy infraction of one of golf’s contentious new rules on the final green of his Omega Dubai Desert Classic title defence last Sunday.

Even European Tour chief Keith Pelley called the decision, after Li’s caddie was adjudged to have lined up behind his employer’s final putt, “grossly unfair”. Pelley’s plea for common sense to prevail was dismissed by the rule sticklers at the R&A, leaving Li to chew on his relegation from a share of 3rd place to a T-12 finish and the loss of €100,000 as a result.

All Li could do was move on determinedly to the inaugural Saudi International in King Abdullah Economic City and seek a little self-administered justice. Consider that job sensationally completed after a remarking moving day at Royal Greens Golf & Country Club.

With four eagles, three of them on par-4s and two back-to-back to close out an insane 62, Li has set up an intriguing Sunday duel with Dustin Johnson at the new $3.5 million event.

When the world No.44 stood on the 17th tee at Royal Greens on Saturday afternoon, he was four adrift of Johnson who looked to be cruising towards a maiden regular season European Tour title.

But with an almighty wallop of his driver, Li reached the green of the par-4 17th some 388 yards yonder to set up his absurd grandstand finish. The 23-year-old duly drained the resulting six-footer and then reached the closing par-5 in two blows courtesy of a kind bounce over a fairway bunker off the tee. After coolly pouring in the resulting 10-footer, he’d somehow drawn level with the shell-shocked world No.3 at -16.

Li might have even taken a one-stroke lead into the final round but Johnson, after running out of fairway at 275 yards with his final drive, managed to conjure a par on the closing par-5 despite a wet penalty stroke as he signed for a 65.

It was a remarkable finish to a day that also saw the disqualification of Sergio Garcia for “serious misconduct” after the former Masters champion damaged a couple of greens in frustration. England’s Tom Lewis, who produced a more conventional 62 with a blemish-free card of eight birdies, is third, five strokes adrift of Li and Johnson while the Frenchman Alexander Levy and Kiwi Ryan Fox are T-4 seven back.

Li’s three eagles on par-4s, with chip-ins on the 1st and 10th and driver-putt combo on the 17th, are a European Tour record for a single round and follows the three hole-out eagles Chez Reavie sensationally racked up at the recent Sony Open in Hawaii.

Li admitted afterwards that he had ridden his luck but no one could begrudge the former Desert Classic champion a little good fortune after last week’s controversary. Remember too that his extraordinary round included a double bogey on the 6th.

“I think it’s very, very lucky today. Those eagles, especially last couple shots, was really solid, but except that, honestly, my play, wasn’t that good. But I did make a lot of par putts,” he said.

Li famously held off Rory McIlroy to hoist the Dallah Trophy at Emirates Golf Club 12 months ago and is looking forward going stroke-for-stroke with Johnson.

“I just want to play my best there, especially compared to last week [in Dubai]. So just have to put myself in the position hopefully often and I get used to that feeling and play and enjoy myself in the final round.”

Li will need more than lady luck on his side to overpower Johnson who looks to have every part of his game in tune; there was a solitary bogey in his Saturday 65 but that was camouflaged in a mixture of booming drives, precise approaches and some deft chipping and putting.

“I heard when I got done, yeah, that’s pretty impressive. Four eagles in a golf tournament is pretty good, but four in one round, take that any day,” Johnson said of Li’s heroics.

“For me, I just go out and play like I’ve been playing and hopefully can roll in a few more putts and see what I can do. Haotong is a good player. He’s obviously playing well right now. I think it’s going to be kind of a tough match against him tomorrow for the most part, but I’m looking forward to it.

“Just go out and play my game, don’t worry about what he’s doing.”

Garcia was disqualified under rule 1.2a which allows for disqualification if a player has committed serious misconduct.

“I respect the decision of my disqualification,” Garcia said in a statement. “In frustration, I damaged a couple of greens, for which I apologise, and I have informed my fellow players it will never happen again.”

New Desert Classic champion Bryson DeChambeau, meanwhile, will start the final round at -6 in a tie for 15th place. The American’s third successive 68 extended his run of under par scores to a thoroughly impressive 25 rounds.

Reed on his Saudi return: ‘If we can help inspire even a handful of people to take up the game, then it will be very rewarding’