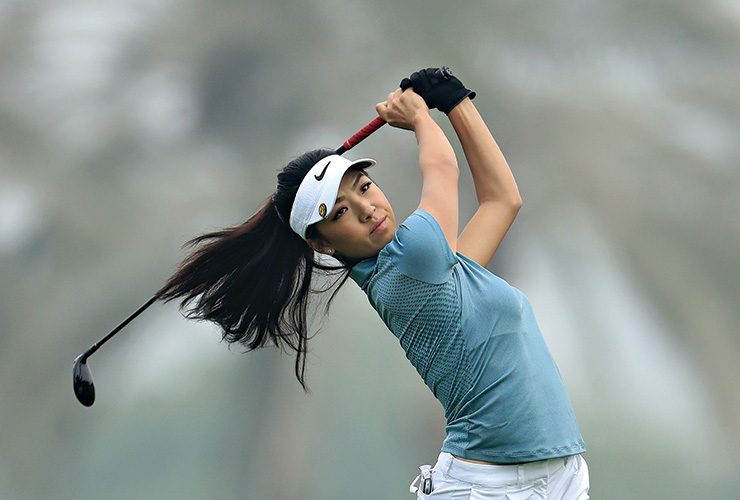 By Alex Myers
Welcome to another edition of The Grind where we have some sad age-related news to report that has nothing to do with Phil Mickelson (more on Lefty later). For the first time, I will be playing for (gulp) Team Boomers and not Team Millennials in this year’s Golf Digest Seitz Cup. It’s sad because I’m getting old. It’s also sad because this awesome poster that photo wizard Mason Leverington created no longer makes sense even though I am still technically, barely, a millennial: 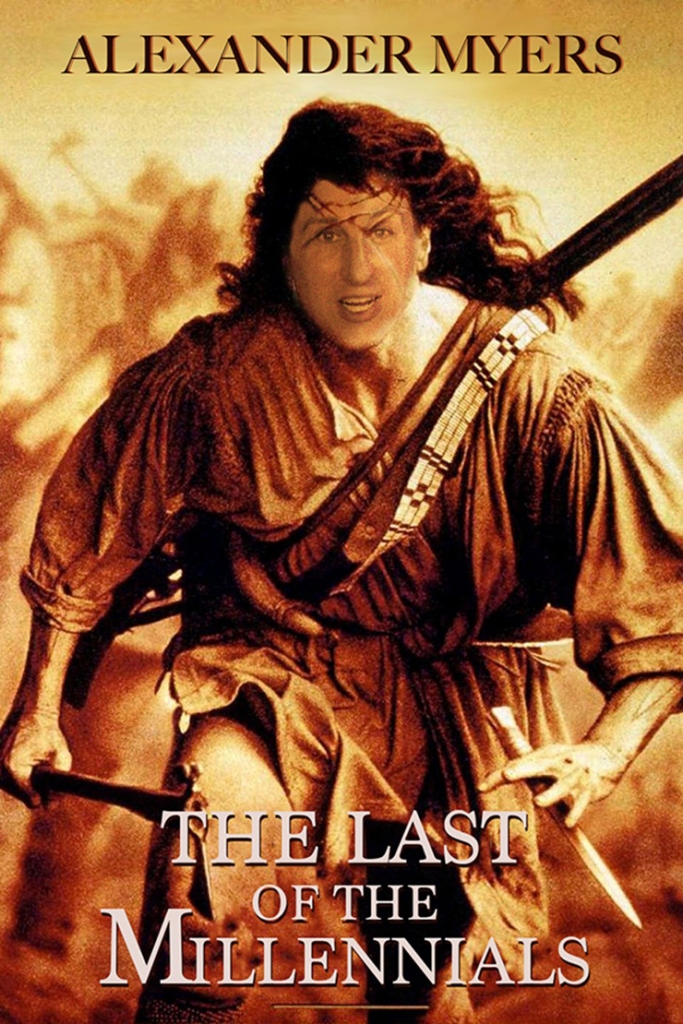 Alas, Mason also will be joining me on the old team this Friday. Life comes at you fast. Anyway, here’s what else is being talked about in the golf world—and around our office—this week.

Rory McIlroy: Watch out, Brooks! As they say on the mean streets of Golf Twitter, “RORY COMIN’!” Since Koepka said he has no rivals in the sport, Justin Thomas, Tiger Woods, and now McIlroy have won events. Sometimes it’s best to let sleeping dogs greats lie. McIlroy beat Xander Schauffele (Kudos to X-man for playing through his “flu game”) in a playoff at the WGC-HSBC Champions for his fourth win in his past 16 PGA Tour starts. 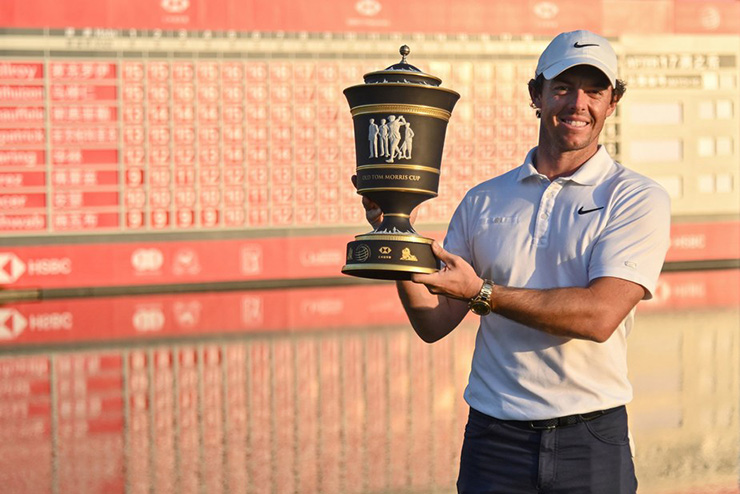 Brendon Todd: It’s impossible to overstate how remarkable a turnaround Todd has made in the past year. After a stretch in which he missed 37 of 40 cuts and developed the full-shot shanks, the 34-year-old has resurrected his career thanks to an instructional book by Bradley Hughes, who is now his coach. Todd looked invincible during the final round of the inaugural Bermuda Championship, birdieing nine of his first 11 holes and shooting 62 to win by four shots. A guy whose golf game had completely disappeared taking home a Bermuda Triangle trophy. 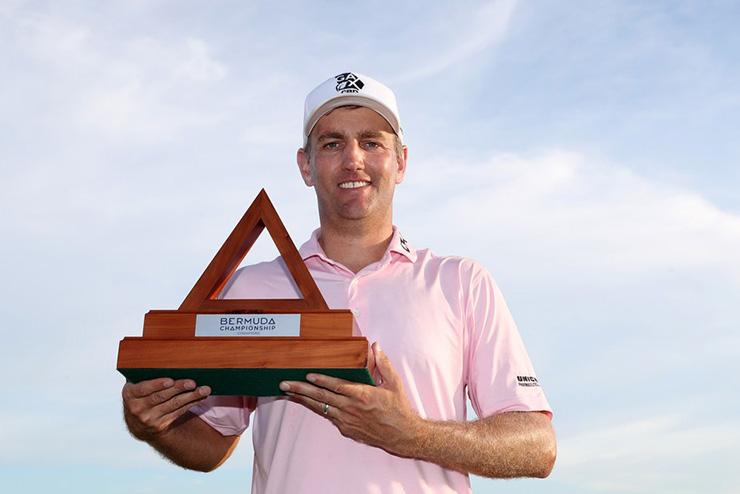 Good for him, what a story. Oh, and I need to buy that book. 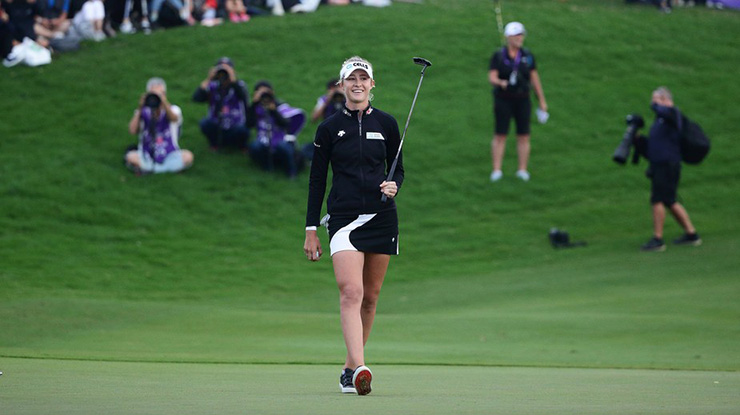 She also gave a lot of credit to her caddie, Jason McDede, who just happens to be the fiancé of Caroline Masson, one of the women Korda beat in a playoff. Imagine that pep talk? Sounds like a great plot to a Rom-com!

LPGA Q-Series qualifiers: After a tough rookie season, Muni He is headed back to the LPGA Tour after winning Q-Series by three shots. In case you’re not familiar with the 20-year-old who more commonly goes by Lily, she played one year of college golf at USC before turning pro and she’s already racked up 259,000 followers on Instagram:

Two weeks, 8 rounds under par, -21 for the win. Couldn’t have asked for a better way to wrap up my rookie year! Through the ups and downs of my first season on tour, I’ve learned and grown so much. Beyond thankful for everyone’s support through it all. 🙏🏻♥️ Excited for full status in 2020, have a feeling it’ll be a great one!😼♥️

OK, you get the point. Also earning their tour cards were 18-year-old Yealimi Noh, who nearly won an LPGA event as a Monday qualifier last season and Haley Moore, the University of Arizona product who has become an inspiration to many with her story of overcoming bullying. Moore also overcame the embarrassment of her dad showing up to the tournament dressed as Mr. Incredible.

Haley’s dad, Tom, for the win on Halloween. Great way to lighten the mood at golf’s most grueling event. pic.twitter.com/PkrpeeO9or

LPGA Q-Series rules controversy: Golf’s latest rules controversy might be the most baffling yet as a pair of two-stroke penalties were handed out during the LPGA Q-Series to two players who shared what club they hit on a par 3. Or rather, one player, Dye, and the caddie of another player, Dewi Weber. More shocking was Dye, a veteran tour pro, claiming she’s never heard of one of golf’s most basic rules and one that my buddies and I joke about literally every time one of us asks another for club-selection advice. To compound her error, whether it was on purpose or not, Dye tweeted the following message in which she used the old “everybody else does it” defense while calling Christina Kim, the player who reported the blatant rules infraction, “unprofessional” for waiting to tell the two players until they finished the round and for some vague tweets after:

Not good! The moral of the story? Let’s all be more careful about the rules. Oh, and the golf gods seemed to side with Kim, who earned her tour card while Dye didn’t.

Greg Norman: In an interview with Men’s Health, The Shark said he feels snubbed by Tiger Woods after not getting a response to the handwritten and hand-delivered note Norman left at Woods’ front gate after he won the Masters in April. “Maybe Tiger just dislikes me,” Norman said. Or, maybe he’s not a big fan of some of the things you’ve said about him through the years? Just a thought. 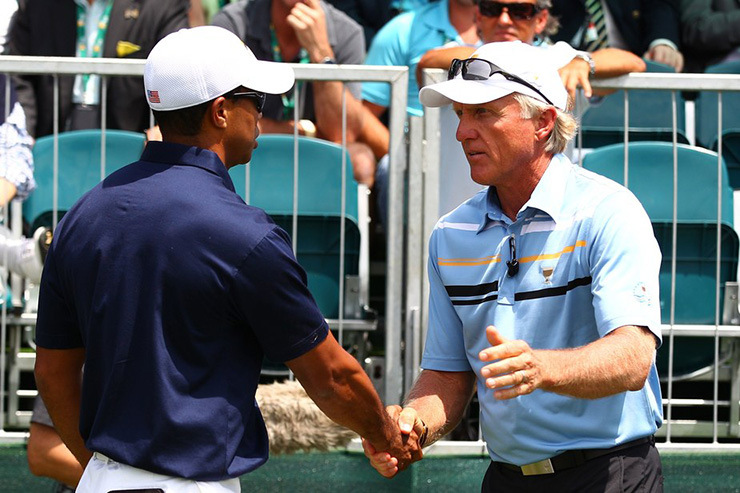 Norman also said in the interview he hopes to live to 108 or 110. Even if he does, I think he’ll still be waiting to hear back from Tiger.

The end of Phil’s streak: All good things must come to an end, right? Kinda like me playing for the young squad in our annual company golf outing. But seriously, what an incredible run by Phil to stay in the top 50 of the Official World Golf Ranking for nearly 26 years. Absolutely amazing. Heck, a lot of my co-workers have never lived in a world where Phil wasn’t a top-50 player. And again, that’s why I’ve been bumped to the old team. Sigh.

The PGA Tour heads to … nowhere! It’s a DARK week as they say in show business. It’s also a cold week in Connecticut, where the annual Golf Digest Seitz Cup will be held at Rock Ridge Country Club. For those who don’t know, the Seitz Cup is a battle of old versus young at the company, and I’m not sure which side the sub-40 temps favour. I am sure I will be looking forward to the post-round chili more than ever, though, with these conditions. Random tournament fact: Tiger Woods is NOT participating in the Seitz Cup, either as a player, captain or playing captain. Although I’d love to see him there, keeping that back healthy is more important than team bonding.

—Tiger Woods and Greg Norman will hand-deliver Christmas gifts to each other this year: 1 MILLION-to-1 odds

—Phil Mickelson will win another PGA Tour event: 2-to-1 odds

The European Tour returned with another edition of “Chase The Ace,” and this time, Thomas Pieters was the subject victim:

We gave @Thomas_Pieters 500 balls to see if he could make a hole-in-one.

“I’ll never get there. I’m a realist and I know that 82 PGA Tour wins is something that in this day and age is probably not going to be surpassed.” —Rory McIlroy, who picked up win No. 18 a few days later. But yeah, no one is getting there, so don’t feel bad, Rory.

To be clear, I’m 100 per cent on Team Christina Kim in this matter, but I LOL’d at this joke. Sorry, knee-slapper. I’m old now.

There are bucket-list days and then there are days you could never dream of. The latter happened to me last week when I played a round of golf with my childhood idol, John Starks. At Winged Foot, no less. 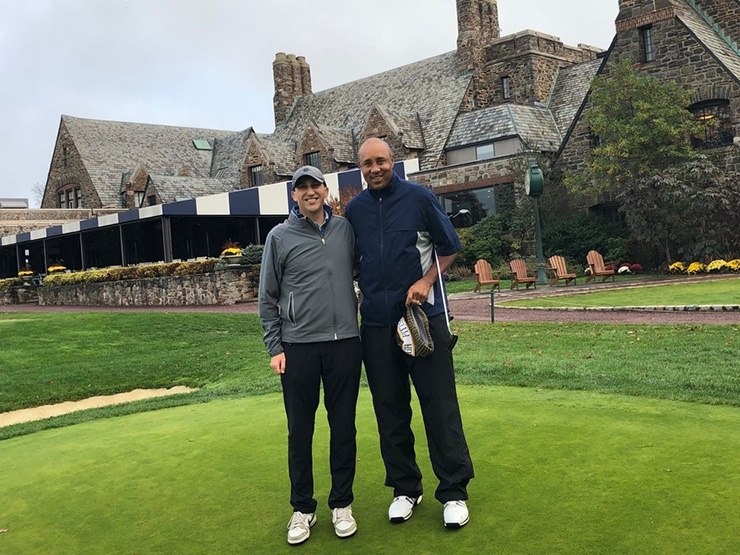 The pairing was part of a USGA outing previewing the 2020 U.S. Open at the famed New York track and tickets are already available. In case you’ve ever wondered why my Twitter handle is @AlexMyers3 (I know you haven’t, but anyway … ) it’s in honor of Starks’ jersey number with the New York Knicks. Sadly, there were not a lot of 3s made by us on this difficult track, but what a great experience.

THIS WEEK IN PGA TOUR-WAG-FAMILY PUBLIC DISPLAYS OF AFFECTION 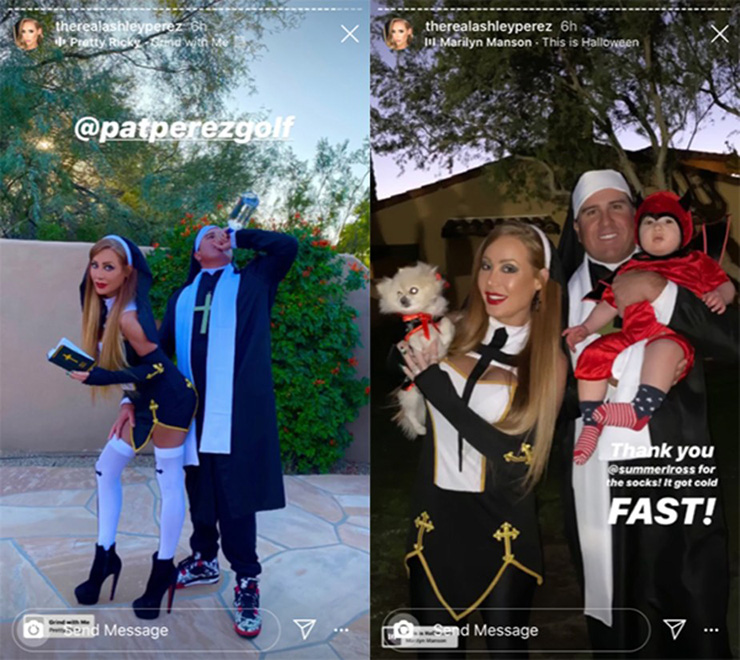 Happy Halloween from The Snedekers!! #wizardofoz
PS…
When u do Halloween right, u have 2 get ups..
So….
If u saw a Bigfoot today in Nashville, might have been me… But I still believe!!! #bigfootsighting pic.twitter.com/WO2ONhCglG

That’s TWO costumes for Brandt! Impressive commitment. Oh, and as promised, here are a couple pics of my daughter dressed up as a dog: 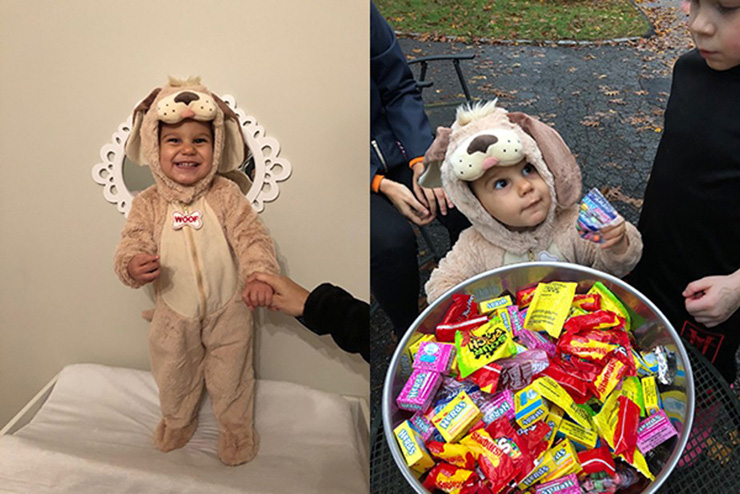 Pretty good. But next year we might have to dress her up as Tiger Woods, though, and take a trip to Jupiter, Fla. . . .

Charles Davis joined this week’s Golf Digest Podcast and we talked Tiger, Russell Wilson and Wake Forest football. So, yeah, basically, a perfect conversation for me. … Congrats to Rory McIlroy and Sergio Garcia on crossing the $50 million mark in career on-course earnings! These guys are good rich. … Congrats to Chase Koepka on advancing past the second stage of Q School with big brother Brooks’ caddie, Ricky Elliott, on the bag. Way to take advantage of your sibling’s knee injury! … And finally, a special shout-out to co-workers Brittany Romano and Claire Rogers for continuing the Golf Digest tradition of getting a golf cart stuck: 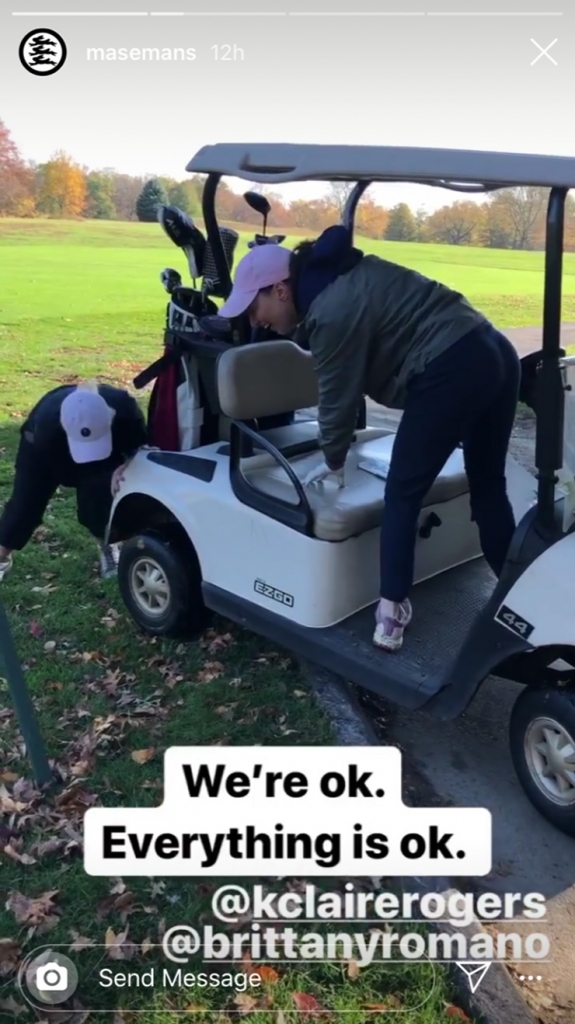 OK, so it’s not really a tradition here, but Jaime Diaz did it once. And I’ll never let him forget it.

Why isn’t John Starks’ No. 3 retired in Madison Square Garden?

Why do we wait so long to have the Seitz Cup every year?