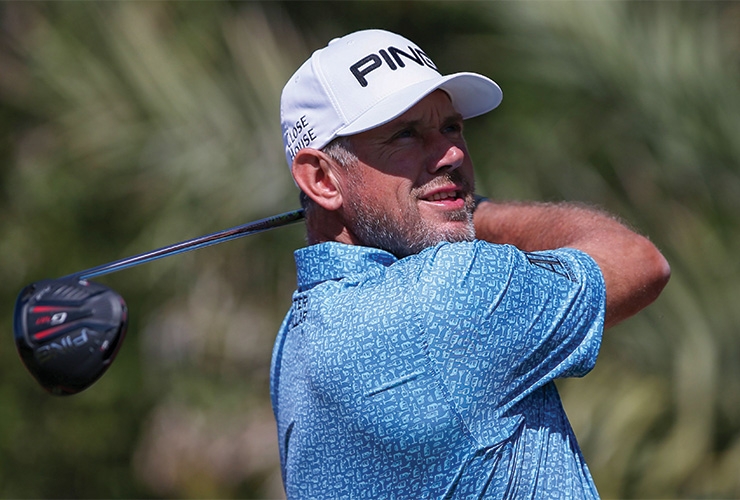 Photo by -/AFP via Getty Images
Westwood in action during the third round of the Abu Dhabi HSBC Golf Championship on January 18, 2020.

By Kent Gray
Lee Westwood is on course to tie Sir Nick Faldo’s record for the most European Tour top-10s by an Englishman, a seemingly inevitable reminder of a stellar career cruelly undermined by that major asterisk beside his name. On the evidence of his body of work this week, the former world No.1 clearly has grander plans to embellish his legacy on the final day of the 15th Abu Dhabi HSBC Championship presented by EGA.

A seven-under, third round 65 will see Westwood take a one-stroke lead over Austrian Bernd Wiesberger and Italian Francesco Laporta into Sunday at Abu Dhabi Golf Club, not to mention the experience of closing out 24 European Tour events over the past quarter-century.

Westwood didn’t make the biggest charge on moving day, that honour going to Sebastian Heisele after the Dubai-raised German soared 52 places up to a share of 9th with his early 64.

But it was the 46-year-old Englishman who made the most significant Saturday ascent, up six spots to the top of a cluttered leaderboard where 12 players are within five shots of Westwood’s -14 lead. Westwood’s obvious pedigree notwithstanding, the first Desert Swing event of the new decade looks set
to be decided by an absorbing multi-player shootout.

Six birdies and a sensational eagle at the 8th has given Westwood pole-position to celebrate his 25th season on tour with a 25th title and what would be his 44th worldwide victory. Regardless of how Sunday transpires, he looks set to match Faldo’s 179 top-10s, not that he’ll be playing for consolation milestones.

What kind of score do you think you’ll need to get it done in the final round?

“One better than everybody else,” came Westwood’s succinct retort. “I can’t tell the future. I’m just going to go out there and play as well as I can, and if it’s good enough, then great. I know I’m talented enough to win the tournament. It’s just a case of applying myself.

“It’s always a bonus to be in contention, and that’s basically why we come out here. I’m not going to lie, I didn’t play a lot of golf coming into it. Didn’t know what to expect. To be in the lead with one round to go, it’s a real positive.”

Westwood negotiated the National’s outward nine in a sublime 31 strokes, a five under run highlighted by his 266-yard hybrid to three feet to set up the eagle three on the 8th.

Cruising along on a 32-hole bogey-less streak, Saturday’s only bogey blemish came via a wayward tee shot on the 14th, followed by a toe hook into some bushes on the opposite side of the fairway.  It was a close-run thing though with Westwood catching the cup with his chip for par,  an encouraging sign that his sometimes troublesome short game in sync this week.

“I played well. I holed a couple of putts early on which gave me some momentum and then hit a brilliant shot into 8, the par 5, with a hybrid, 266 to about three feet. Then backed it up with a birdie at 9, so a bit of momentum, got on a roll,” he said.

“Had birdie chances on the back nine. A bit unlucky on 14, came out straight left [his second shot], snagged the hosel, but a solid finish. Birdied 16 which is not the easiest hole on the course and a nice birdie at the last.”

Former Emirates Golf Club champion Heisele will start the day among those five adrift. But with decorated names such as Matthew Fitzpatrick (pictured left, -12), Sergio Garcia (-11) and Rafa Cabrera Bello (-10) above him, much less Westwood, it will be some ask to turn the dream of a maiden European Tour title into glorious reality.

At least Heisele has a shot. A third-round 70 saw Brooks Koepka continue his tumble down the leaderboard to a share of 48th at -5. Given the nine-shot head start he gives Westwood, the best the world No.1 can probably hope for is to better his Abu Dhabi best of T-9 last year.