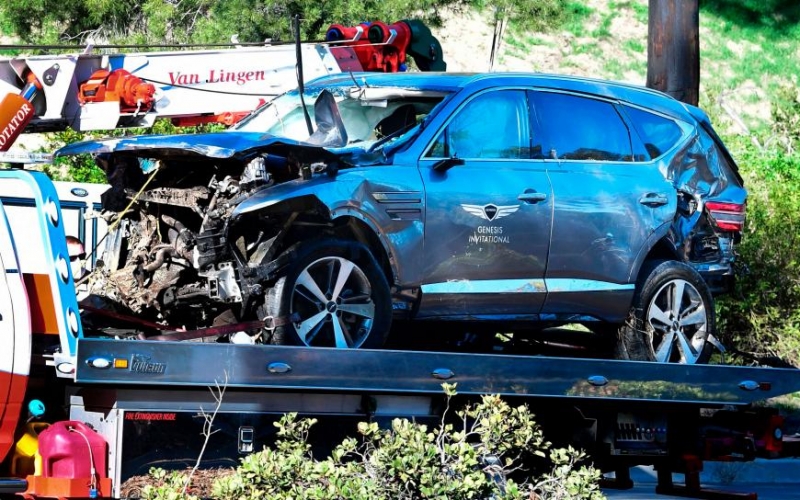 By Daniel Rapaport
The Los Angeles County Sheriff’s Department has determined that excessive speeding and an inability to negotiate a curve in the road caused Tiger Woods’ single-car accident near Los Angeles on Feb. 23.

In a press conference on Wednesday, Los Angeles County Sheriff Alex Villanueva said Woods’ vehicle was traveling at “a speed unsafe for the road conditions”—between 84 and 87 miles per hour when he lost control, and roughly 75 miles per hour upon impact. He said there were “no signs of impairment” and that Woods has not been charged or cited in connection with the accident.

Woods, 45, was the lone occupant of a 2021 Genesis GV80 as he headed northbound on a particularly hilly portion of Hawthorne Ave. in Palos Verdes at roughly 7 a.m. that Tuesday morning. He lost control of his vehicle, crossed over onto the wrong side of the road and then rolled onto a hillside before a bystander discovered him unconscious, according to an affidavit provided to the Los Angeles County Sheriff’s Department.

The 15-time major champion and 82-time PGA Tour winner suffered serious injuries to his right leg as a result of the accident. He had a rod inserted into the tibia to stabilize the fractures, as well as screws and pins inserted into his foot and ankle. Additionally, trauma to the muscle and soft-tissue of the leg required a surgical release of the covering of the muscles to relieve pressure due to swelling.

After initially being treated for his injuries at Harbor-UCLA Medical Center, the closest Level 1 trauma centre to the site of the accident, Woods was subsequently transferred on Feb. 26 to Cedars-Sinai Medical Center in Los Angeles and has since returned to his South Florida home.

To conduct their investigation, authorities obtained access to the vehicle’s “black box”—a device that recorded information about Woods’ car in the moments before impact. Authorities needed sign-off from Woods and his camp to release the findings of the investigation.

With approval from the Woods camp, Jim Powers, captain of the Lomita sheriff station, was able to elaborate on several details from the accident.

Here’s what we learned.

“People said, ‘Oh, they should have drawn blood or done this or done that,’” Villanueva said. “Without the signs of impairment we don’t get to the point where we can actually author a search warrant and determine the probable cause to get that and execute that search warrant, so that did not happen. And that is not preferential treatment. That would occur in any collision of this type.”

Villanueva also said that past history—such as Woods’ previous incidents—is irrelevant in establishing probable cause.

“He was coherent, his speech was normal. There are interviews of him at the hospital where he is answering questions in the emergency room.”

Authorities reviewed tape of Woods before the incident and saw nothing abnormal. Powers: “I know there were allegations of an incident that occurred prior to the collision. I reviewed video footage and he was, I watched him on video walk out to his car, put his personal belongings in his car and drive off the property. And he was driving very normal, very slow as he began driving, to the point where it didn’t appear he even put his foot on the accelerator. He just took his foot off the break and allowed the car to roll away. He made complete stops at two stop signs and stopped for a traffic signal before entering the highway. So there is no evidence of any increased speed or rushed behaviour.

The car struck a tree, which sent it airborne. Powers: “It did a somewhat pirouette, landing on its side,” said Powers.

“The data recorder also recorded braking. There was no evidence of braking throughout this collision. It is speculated and believed that Tiger Woods inadvertently hit the accelerator instead of the brake pedal, causing the 99 percent rating on the accelerating pedal.”

The steering wheel was moved in both directions during the incident.

Woods was not cited with reckless driving for a specific reason. Powers: “We did not check his phone for texting. There was really no need to do that. There was no other evidence. The only associated factor—well, there are two factors. The speed, and the failure to maintain the curvature of the road. That’s it, there’s nothing from the cell phone to indicate distracted driving.

Powers also added that there need to be multiple violations in order for a reckless driving charge. Speeding, on its own, is not enough. And he was not charged with speeding because no officer witnessed it.

Shortly after the press conference concluded, Woods released a statement on social media, saying he is “so grateful to both of the good samaritans who came to assist me and called 911” and thanking authorities for their work in getting him to the hospital.

“I will continue to focus on my recover and family, and thank everyone for the overwhelming support and encouragement I’ve received throughout this very difficult time.”

Rory McIlroy says he’s ‘just at the start of a journey.’ Here’s what he means

Bryson DeChambeau still intends to take down Augusta. But here’s how he’s changing his plan of attack

Is it possible that the trio of amateurs in the 2021 Masters field—Tyler Strafaci, Joe Long and Ollie Osborne—might find themselves a bit lonely this week?