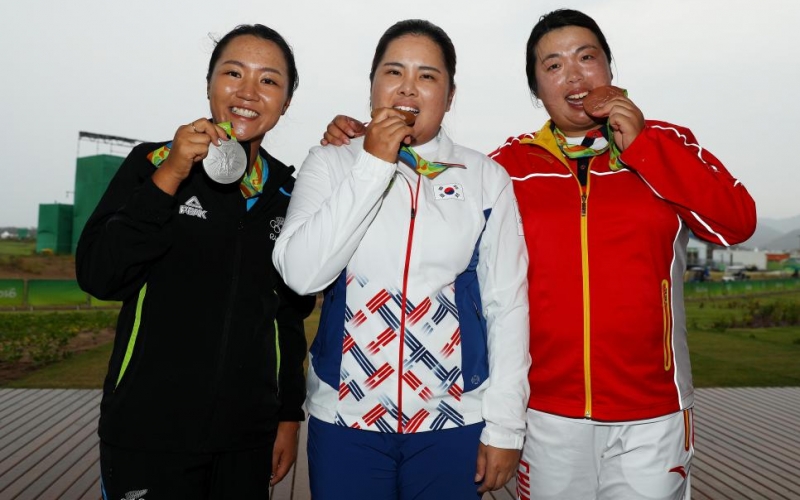 By Kent Paisley
With the Rolex Women’s World Rankings updated on Monday, the field was finalised for the third-ever Olympic women’s golf competition. The United States and South Korea are the two countries sending four players, with their competitors all within the top 15 of the world as of the June 28. All other nations were eligible for up to two representatives in the 60-player field.

Nelly Korda, the new World No. 1 coming off her victory on Sunday in the KPMG Women’s PGA Championship, leads the U.S. to Tokyo alongside Danielle Kang (5th), Lexi Thompson (9th), and Jessica Korda (13th). Jessica Korda sat on the outside looking in at the start of the year, ranking 23rd before cracking the top 15 with a win at the Diamond Resort’s Tournament of Champions, followed by back-to-back top-3s at the Hugel-Air Premia LA Open and the Pure Silk Championship.

The Kordas, whose brother Sebastian will compete for the U.S. in tennis in Tokyo, are the second American family members to play together in Olympic women’s golf. The 1900 Olympics had Margaret and Mary Ives Abbott, daughter and mother, respectively, represent the U.S. in the first Olympic women’s golf tournament. Margaret won gold, becoming the first woman to win an Olympic medal for America in any sport.

Players took to social media on Monday to express their excitement.

Coming into the year making the @Olympics was one of my top goals and to see my hard work pay off is the best feeling. Feel blessed and grateful for the opportunity to represent my country in Tokyo and I can’t wait to be there!! 🇺🇸 @TeamUSA pic.twitter.com/qfEb3uJW3z

All three medalists from 2016 Olympics in Brazil are returning for the Games that were postponed from last year due to the COVID-19 pandemic. The reigning gold medalist is South Korean Inbee Park, the current World No. 3. Silver medalist Lydia Ko (No. 10), of New Zealand, enters the Games off a resurgent 2021, with a win at the Lotte Championship and five top-10s in 12 starts. Bronze medalist Shanshan Feng (No. 19), of China, might be making her last competitive golf appearance in Tokyo. The 10-time winner shared after missing the cut at the KPMG Women’s PGA Championship that she told her team 2021 would be her final year, as Feng is still deliberating when she’ll retire.

The South Korean team can make the strong argument that it was the hardest to make. If a player wasn’t in the top six in the world, she didn’t have a chance. Along with Park, countrywomen Jin Young Ko (2nd), Sei Young Kim (4th) and Hyo Joo Kim (6th) round out the team.

The three major champions in 2021 will have a chance to make the medal stand in Tokyo. Eighth-ranked Yuka Saso, the first major champion in golf out of the Philippines, won the U.S. Open in May and will represent her country alongside close friend Bianca Pagdanganan. ANA Inspiration winner Patty Tavatanakit (12th) represents Thailand with Ariya Jutanugarn. Tavatanakit passed Moriya Jutanugarn for the second Olympic spot after her victory in Rancho Mirage.

The 2019 AIG Women’s Open winner, Japan’s Hinako Shibuno (31st), will not represent her country in Tokyo. Nasa Hataoka (11th) and Mone Inami (27th) will wear the Japanese flag. Sibuno began the year inside the Olympic bubble, but has struggled this year, missing two of three cuts in majors, with no better than a T-33 in any event since April.

The challenging part of making the teams is over. Now, players wait for the 72-hole tournament that will be played Aug. 4-7 at Kasumigaseki Country Club.