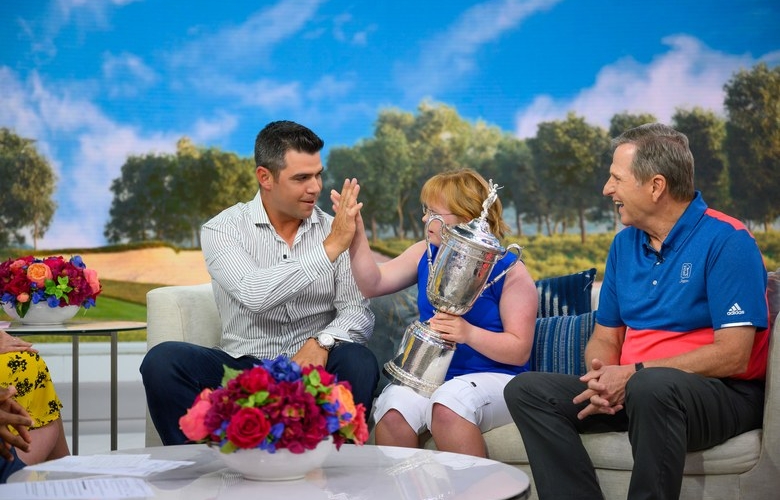 By Brian Wacker
Gary Woodland was practising at TPC Scottsdale on Sunday when the news of Kobe Bryant’s death broke. At first, he tried to figure out if it was real, then a wave of emotion swept over him.

Part of the reason: Woodland is himself a father of young children, and Bryant’s impact was transcendent.

“He shut the world down for a day,” Woodland said Wednesday. “It’s the people, the stories, and he’s one of those guys where I never met him, but I feel like I knew him. And that’s the impact I think that Amy’s had as well. People, even if you don’t know her, you felt like you know her.”

The Amy that Woodland was talking about is Amy Bockerstette.

It was a year ago at TPC Scottsdale where she and Woodland were introduced to one another on the famed 16th hole, through an arrangement by the PGA Tour. Bockerstette, 21, has Down syndrome and is the first person with the condition to have received an athletic scholarship to attend college, at Paradise Valley Community College in nearby Phoenix. On that day, Woodland asked Bockerstette if she’d like to hit a shot on the par 3 during the pro-am. She did, knocking her tee shot into a greenside bunker before getting up-and-down for par. Video of the moment went viral, and it has since been seen more than 44 million times.

Wednesday, the two were reunited. A lot has changed in the 12 months since they met. Woodland is a major champion, having won the U.S. Open at Pebble Beach last June, and Bockerstette a celebrity with a foundation that launched in October that promotes golf instruction and play for people with intellectual disabilities.

“The impact of the U.S. Open was cool from a personal standpoint,” Woodland said. “It gives me a lot of confidence. I show up to golf tournaments, now I know I’m a major champion, I know I can beat the best players in the world any given week, so that’s special.

“From an impact that Amy’s had on me, that’s changed me in everyday life, being a positive attitude, loving people, staying in the moment. That will help you on and off the golf course anywhere you go. That’s the way I try to live right now. I’m trying to instill that in my kids, and my family, and that’s because spending time with her.”

Which brings us, for a moment, back to the sudden and tragic death of Bryant, his 13-year-old daughter GiGi and the seven others, including three other teenagers, who perished in a helicopter crash near Los Angeles on Sunday morning.

Bryant was the father of four girls—a #girldad, another item that went viral after ESPN anchor Elle Duncan’s emotional moment talking about the one time she’d met Bryant and their bonding over being parents of girls. And Woodland is the father of two girls, after his wife, Gabby, gave birth to twins last summer, as well as a boy, 2-year-old Jaxson, who was born in 2017 when Woodland’s wife was again due with twins but lost a girl during pregnancy.

“It’s been an emotional week,” Woodland said. “When I think of Kobe now, I think of the images of him with his daughter, with Gigi, on the basketball court, talking to her, getting back into the game because of her and the love she had for it.

“I’ve looked up to Kobe my whole life. I grew up in that generation with him dominating, so I’ve always wanted to be him, the way he worked on the basketball court, I wanted his work ethic. … Looking at him the last couple years, I want to be like him as a father. I want to be able to spend time with my kids.”

Which is why on Tuesday Woodland brought his son onto the golf course with him for the first time during his practice round. Bryant’s passing was a cruel reminder of the fragility of life.

“I don’t know the impact that I’ve had on that compared to the impact she’s had. It’s been unbelievable,” Woodland said. “Everywhere I go I hear, ‘I got this,’ [and] people come up to me, I have adults come up to me crying because they have seen the video and they know somebody that has Down syndrome or it’s been, the impact that it’s had on other people has been tremendous. I had a kid come up to me in Maui this year after Saturday. I was going through the autograph line signing autographs talking to some kids and a kid came up to me and said, ‘Hey, I want to let you know I have special needs and I saw the video that you did with Amy and it makes me believe that I can be a normal kid.’ I got emotional there.