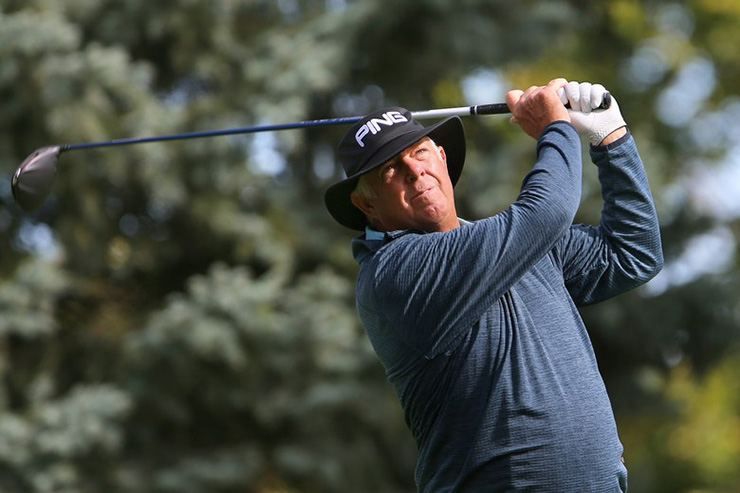 By John Strege
Kirk Triplett has frequented Pebble Beach over the years, and he also has frequented the top of the leader board in the annual PGA Tour Champions event there.

Triplett on Sunday won the PURE Insurance Championship, as it is now called, by holing a 10-foot birdie putt to defeat Billy Andrade on the first playoff hole, the iconic 18th at Pebble Beach Golf Links.

It was Triplett’s third victory in the tournament, the first two coming 2012 and 2013 when it was known as the Nature Valley First Tee Open at Pebble Beach.

“I’ve been coming here a long time,” said Triplett, a West Coast native who grew up in Pullman, Wash., and played collegiately at the University of Nevada in Reno. “I’ve played probably 60 professional golf tournaments here. I come here in the winter for the Pebble Beach Invitational. I’ve played the U.S. Open. I’ve played the First Tee events, the AT&T. I just enjoy this kind of golf. It’s a beautiful place. I like restaurants, staying here at the hotel. And the course gets better every year.”

Triplett, 57, entered the final round tied for fifth and was playing well ahead of the final group of Andrade and Steve Flesch. He shot a five-under-par 67 to complete 54 holes in nine-under 206.

But he still trailed Andrade by two. Then Andrade bogeyed the par-5 14th hole and the par-4 16th to fall one behind Triplett. He rebounded with a birdie at the par-5 18th hole to force a playoff.

Andrade laid up with his second shot at the 18th in the playoff, then left his third 15 feet below the hole. Triplett, from 57 yards, hit his third shot to 10 feet left of the hole. After Andrade left his birdie attempt short, Triplett, one of the tour’s best putters, holed his left-to-right putt in the heart.

The victory was his second of the season and eighth of his PGA Tour Champions career.

Bernhard Langer (where have we heard this before?) wins again

Langer leads, Lefty lurks and everything else you need to know about the Charles Schwab Cup Playoffs