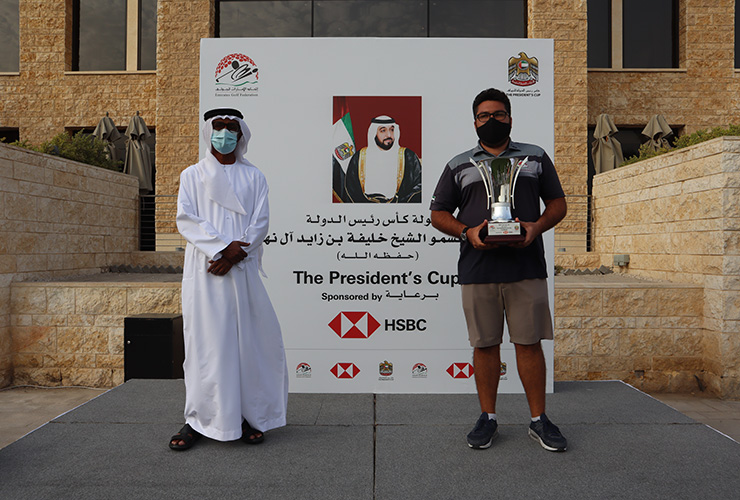 By Kent Gray
Khalid Yousuf has cemented his place in Emirati golf folklore with a fourth victory in the 36-hole UAE Presidents Cup.

The national rep edged his Dubai Trophy captain and defending champion Ahmad Skaik at the first-hole of sudden death at Abu Dhabi Golf Club on Saturday.

A playoff birdie got it done for Yousuf who now has a shot to win exactly half of what will be the 10th anniversary of the HSBC-sponsored, Emirates Golf Federation (EGF)-officiated event when he defends next year. Before then Skaik and vice-captain Yousuf will look to help the EGF amateurs make it a six-peat over the UAE PGA pros.

“It is always an honour to win the UAE Presidents Cup. After a tough year due to the current world situation, having the opportunity to compete again is something that we are all grateful for,” said Yousuf who signed for rounds of 76-74 in the sandy conditions to match Skaik’s 150-total (75-75).

“This also gives the EGF the opportunity to show that even during tough times golf can bring the National community together. The Presidents Cup continues to grow and has a strong impact on the development of UAE golf. The playoff against Ahmad was fun and a great way to finish a good weekend. In tough conditions, we both weren’t on the top of our game but I was lucky enough to come out on top.”

Alia Al Emadi won the ladies title for the first time with rounds of 81-79 for a championship total of 160. Reema Al Heloo finished second a stroke adrift and had the consolation of winning the net title with a 154 aggregate.

“I went into this weekend without pressure and I think that is what helped me win,” said Al Emadi.

“I came into the weekend with no intentions I just wanted to play my game and try my best, but most importantly enjoy the weekend. It showed me that good things come when you don’t force it, just trust your game and the practice will pay off”.

Dr. Sultan Abdul won the senior (over 50) title with rounds of 76-84. Playing off a 23 handicap, Mohammed Abdulla won the men’s net with a total of 123.  Rashid Al Jassm won the boys title on 164, by a shot from Abdalla Al Suwaidi with Sultan Al Owais taking the net prize.

In efforts to develop the game of golf within the national community, the 2021 UAE Presidents Cup also hosted a Par 3 Championship on the Garden Course at Abu Dhabi Golf Club. On a modified 9 holes, this year’s event also offered the UAE Special Olympic Team players to compete in the Par 3 Championship.

Darren Fichardt ready for final round fight, as much with Doha’s winds as with his nearest rivals

Darren Fichardt suspects he’ll need every ounce of the experience garnered from a five-win European Tour career to join an illustrious list of two-time winners of the Commercial Bank Qatar Masters on Sunday.