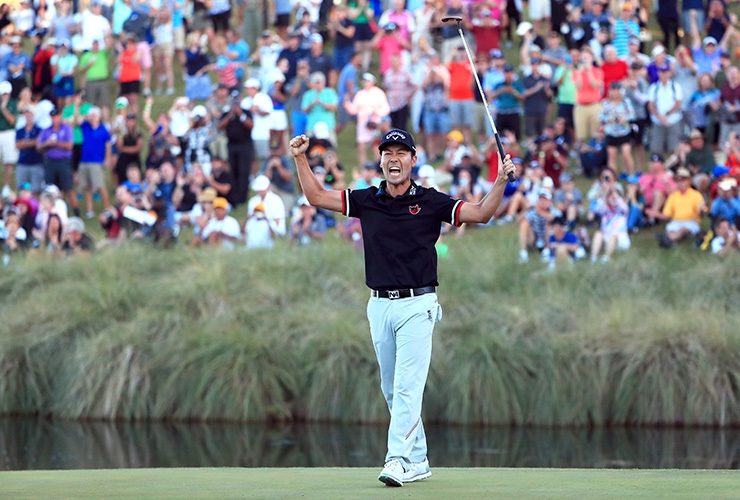 Tom Pennington/Getty Images
LAS VEGAS, NEVADA – OCTOBER 06: Kevin Na celebrates after winning the Shriners Hospitals for Children Open on the second playoff hole during the final round at TPC Summerlin on October 6, 2019, in Las Vegas, Nevada.

By Christopher Powers
Everything you need to know about the career of Kevin Na was on display Sunday at the Shriners Hospitals for Children Open, where Na made the turn in two-under 33 to extend his lead to three shots over Patrick Cantlay. Minutes later, that lead completely vanished when Na made a seemingly catastrophic triple-bogey 7 at the par-4 10th. For some that would likely be the end of the tournament. For Na, it provided an opportunity to fight back, a position he’s more than comfortable with.

Na took his lead back with three birdies in his next five holes, only to give one back at the par-5 16th, where he got too aggressive with his second shot and ended up in a water hazard. Again, he fought back at the next hole, holing a 22-foot par putt that tied him with Cantlay, who made bogey on the hole. Cantlay nearly won it at the 18th, but his long birdie try wouldn’t fall, setting up a sudden-death playoff.

Na was 0-for-3 in sudden-death playoffs in his PGA Tour career, but you wouldn’t have known it by the way he walked in his birdie putt on the first extra hole. Cantlay made his birdie putt, too, but on the second extra hole the 2017 winner in Vegas three-putted for bogey, allowing Na to claim his fourth PGA Tour victory with a short par conversion.

“It came down way too close,” said Na. “I had a comfortable lead, I felt really comfortable, but I hit a really bad tee shot [on the 10th hole], got a little unlucky and made a triple and all of a sudden it felt like I was the underdog. But I’m a fighter, I mean, that putt on 17, I was doing everything I can to make that putt. For that to go in—I knew I had a chance.”

The par save at 17 proved to be the turning point, though Na still needed help from Cantlay in the playoff. His short par try that would have extended the playoff to the third hole broke a little more than Cantlay anticipated, the kind of break you need to beat a player like him.

“He made a little mistake. Patrick’s a great player, a world-class player, and to be able to beat him down the stretch, it felt great.”

This is the fourth win of Na’s career, and his third in the last 15 months. To put that into perspective, it took Na seven years to get his first PGA Tour win, and nearly another seven to get his second. The man knows how to persevere.

“I’ve been in this situation before where I’ve lost the lead, and I’ve failed many times. I’ve lost three playoffs, this was my first playoff win, and I knew, I kept telling myself this is the playoff that I’m going to win.”

As for Cantlay, he’s now finished runner-up at the Shriners in back-to-back years, and he won the event in his first appearance in 2017. Pat Perez, who shot a final-round 68, finished in solo third.