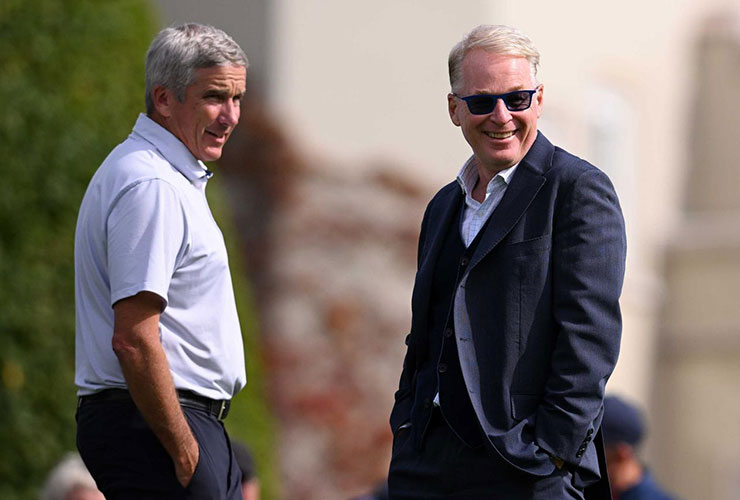 Among the many and varied topics LIV Golf CEO Greg Norman has covered in his on-going long-distance dialogue with the PGA Tour and the DP World Tour is that of World Ranking points. As anyone who has taken the trouble to listen to the two-time Open champion will surely know by now, he isn’t too happy that LIV Golf League events don’t offer any points to its members.

Further provoking Norman’s indignation is the fact that sitting on the board that runs the Official World Golf Rankings — and thus reviewing whether to approve LIV’s application to join the OWGR — are DP World Tour chief executive Keith Pelley, chief operating officer Keith Waters and PGA Tour commissioner, Jay Monahan. “Conflict of interest,” is a phrase Norman has often used to voice his displeasure.

And, as it turns out, not without some justification. According to Pelley, on advice of legal counsel, he and Waters, along with Monahan have recused themselves from the committee that is considering LIV’s OWGR future, sitting out of a meeting last month.

“I have not looked at the LIV application,” said Pelley during a sit-down session with members of the media prior to this week’s Hero Dubai Desert Classic. “So I can’t give an opinion on an application I have not seen. It is in the hands of the technical committee. On the advice of legal counsel, myself and Jay recused ourselves from the separate committee. Representatives of the four majors will now determine the LIV application. We are not involved, and we have no influence on what transpires as far as LIV goes.”

Indeed, with Pelley, Monahan and Waters (representing the International Federation of PGA Tours) recusing themselves, the board has just representatives from Augusta National, the PGA of America, the USGA and the R&A, along with chairman Peter Dawson, left to resolve the issue of LIV.

Less clear-cut for Pelley, however, is another complaint, this time from within his own membership. If anecdotal evidence is to be believed, many players are unhappy at the downgrading of points available on the DP World Tour. Some have even gone as far as to suggest that, going forward, no one competing full-time on tour could realistically play his way into the world’s crucial top 50. The gap between the points awarded in the U.S. and those elsewhere — never mind just Europe, says the argument — has grown too big to be fair.

While Pelley disputes such an assertion, he is clearly aware that the bigger picture is one that perhaps needs to be looked at and adjusted. Driven by the mound and groans he has clearly been hearing, he is taking action.

“I am involved in discussions about the allocation of points on the various tours,” Pelley said. “Victor Perez got 26 for winning in Abu Dhabi [at the HSBC Championship] yesterday. Jon Rahm got 37 for winning the Amex Championship on the PGA Tour. We had 126 players in our field, they had 156. So they had more players in the top 200. And so they got more points.

“Then again, Victor got more points than anyone except Rahm,” Pelley continued. “It is a question we are debating: Is that right, that comparison? The points allocated on both tours have come down this year. And Victor did rise from 111th to 66th [in the rankings]. Do I believe he can get into the top-five playing only the DP World Tour? Absolutely. It’s really not that much more difficult than before. Every tour has been adjusted downwards.”

Still, it does appear as if further tweaking might be on the way. Watch this space.