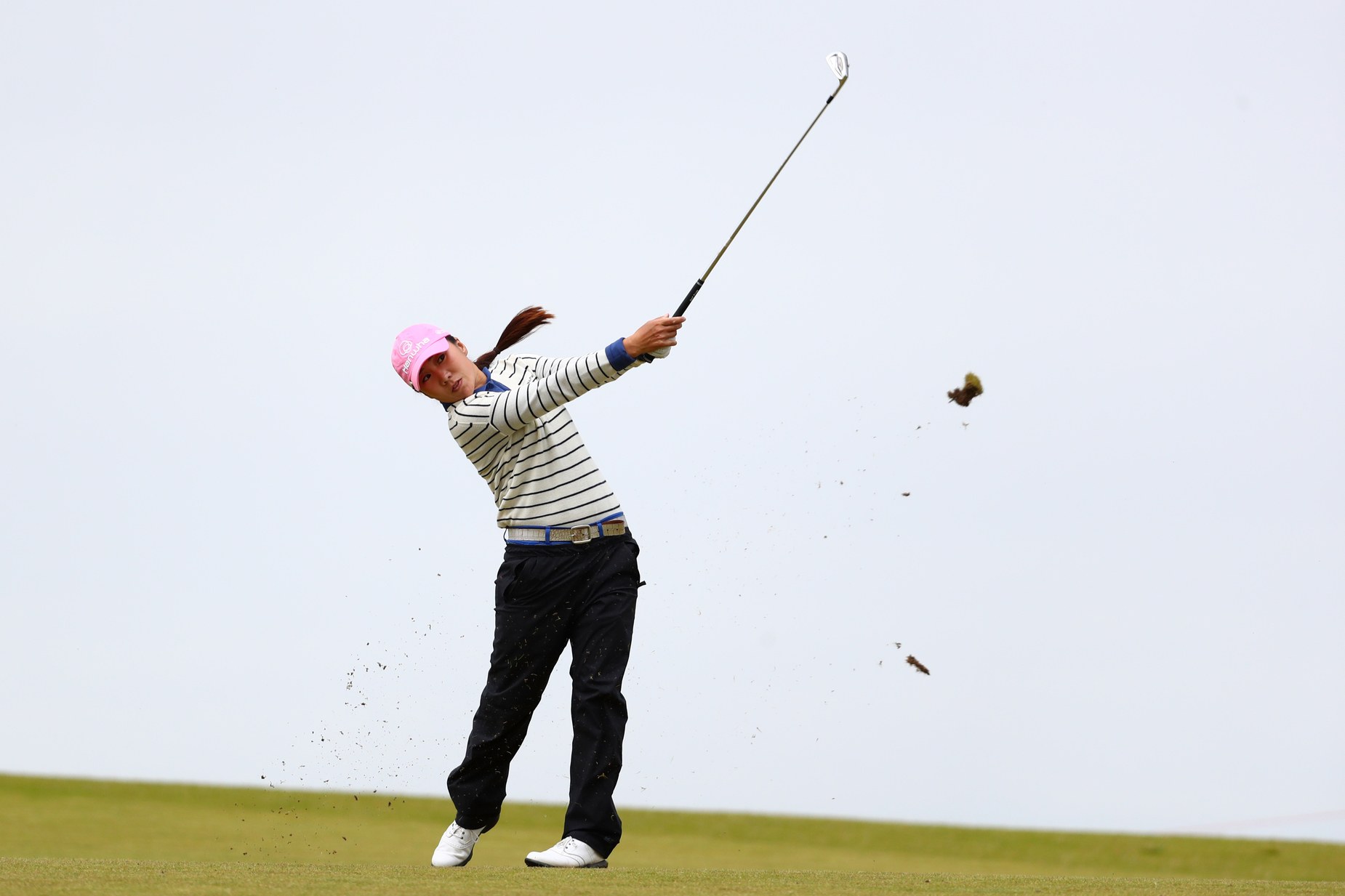 By John Huggan
Performing something akin to miracles in at-times biblical downpours, I.K. Kim leads the Ricoh Women’s British Open at Kingsbarns. The 29-year old South Korean – twice a winner on the LPGA since the start of June – added a second 68 to her opening 65 to reach 11-under par, two-shots clear of world No. 2 Lexi Thompson and England’s Georgia Hall.

Trudging through the worst of the conditions towards the end of a day even the hardiest of Scots might mistake for winter rather than summer, Kim played some beautifully steady golf. Only once did she drop a shot, three birdies and an eagle at the 538-yard par-5 11th more than compensating.

“The eagle was very unexpected,” she said while sipping on what had to have been a welcome hot coffee. “I think this was kind of as bad as the weather could get. I expected rain, but not like this. It’s not easy to play in this kind of weather. But I feel really good about my game. I’ve been hitting the ball very well and I’m starting to make some putts. That’s when I shoot low scores.”

Kim was not alone in doing so, of course, although many were those who struggled. First-round leader Michelle Wie was one, her 76 leaving her back in a tie for 21st place.

There were no such problems for Thompson, although for a while it appeared as if there could be. Her 68 was, in Scottish football (soccer) terminology, “a game of two halves.” Out in a disappointing two-over par 38, the world number-two raced home in 30 blows.

The long-hitting Floridian also found time to introduce a new phrase to golf’s already over-flowing lexicon. In response to a question regarding the extent of her pleasure at her challenging position, Thompson claimed to have “ball-striked it out there.” Grammatically questionable Thompson may be, but there was no doubting the veracity of her obvious meaning. Even on her less then satisfactory front-nine, she put on something of a clinic tee-to-green.

“I actually hit it the same throughout both nines,” she confirmed. “I just left myself with 30-40 feet on my two bogeys and three-putted them. I hit great shots. Going in, they were going right at the flag, but they both got bounces that went sideways. Then I didn’t make the second putt. But I hit it great the whole day and just got on a roll there on the back.”

That “roll” included five consecutive birdies from the turn, a run that was, ironically given the power Thompson routinely displays from the tee, broken by a par on the 539-yard par-5 15th.

Still, it wasn’t her distance off the tee that Thompson felt had been the biggest key to her success. Most of the credit, she felt, should go to her caddie, Kevin McAlpine. The former Scottish Amateur champion – the son of a famous Scottish footballer, the former Dundee United goalkeeper, Hamish – worked four summers at Kingsbarns and so knows the course well.

“Kevin has helped with my decision-making on basically every hole,” said Thompson. “His input going into the greens is especially valuable. He tells me where to land the ball and he’s been spot on every time. He knows the greens like the back of his hand, as well. He’s helped me out a lot out there.”

As for Hall, the 21-year old – who is already all but assured of making her Solheim Cup debut later this month – underlined her enormous promise with a second round 67 that included as many as seven birdies. Four of those came in succession, a run the former Curtis Cup player claimed as her longest-ever visit to the land of red numbers.

“I try to play level-headed all the time, whether I get a birdie or a bogey,” said Hall, who intends to compete at the LPGA qualifying school later this year. “I’m just trying to get as many birdies as I can out there. The course is quite ‘scoreable’ today because it wasn’t that windy. It was a bit tougher yesterday, so I tried to get off to a good start. Which I did. And I managed to hole a couple of good putts on the back nine.”

A word too for the defending champion Ariya Jutanugarn. Cruising along at three-under par for the tournament after 29-holes, the 21-year old Thai came unstuck at the diminutive 135-yard par-3 12th. Her first shot found sand by the green. Her second shot finished in the same bunker. As did the third. And the fourth. And the fifth. And the sixth. The seventh emerged onto the putting surface and two-putts later a big fat ‘9’ was on the card.

Five pars and a bogey later, Jutanugarn finished on four-over par, a figure that will comfortably allow her the luxury of finding something else to do over the weekend.