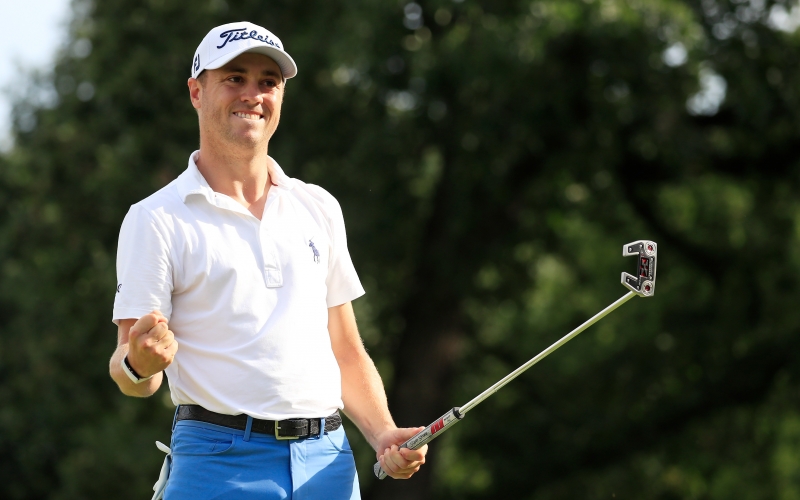 By Alex Myers
Welcome to another edition of The Grind, where we take Shark Week very seriously now that we are owned by Discovery. However, admittedly, we get far more excited about SNACK Week, which is what Grind video producer Michael Sneeden dubbed these recent days after the pantry on our floor was replenished and re-stocked with new items. And luckily, this gluttonous period is lasting more than a week as the Rice Krispie treats, Pop-Tarts and mini cans of Pringles appear here to stay: 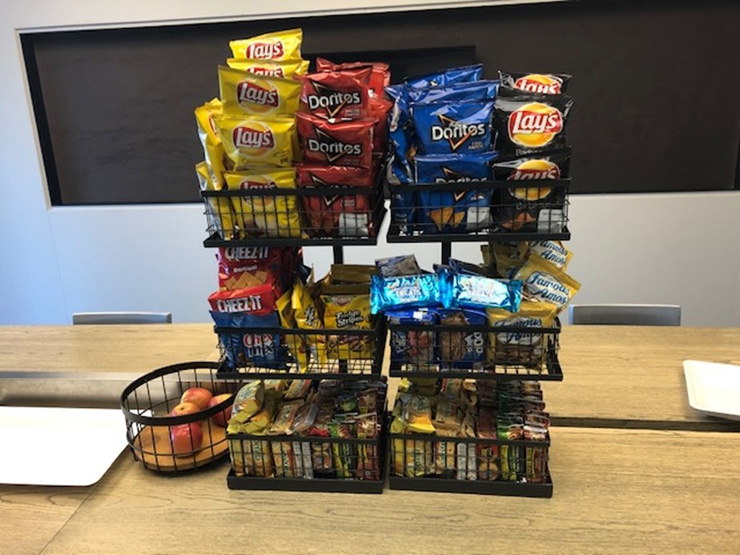 What a time to be alive for Golf Digest’s taste buds! Although, collectively, our cholesterol, weight and blood-sugar levels have spiked (Who is eating the apples, by the way?). The situation also has led to some serious hoarding of snacks (hence, why there were no mini cans of Pringles in that photo) at various desks, so if any co-workers are looking for some Famous Amos chocolate-chip cookies, whatever you do, do NOT open my top drawer. Anyway, let’s pop open a fresh bag of these delightful treats and talk about everything happening in golf.

Justin Thomas: And just like that, Thomas is poised to more than salvage what had been a frustrating—and disappointing for his high standards—season. JT picked a great time to pick up his first win of 2019 at the BMW Championship, cruising to a three-shot win after building a six-shot cushion through 54 holes thanks to a course-record 61 on Saturday at Medinah. 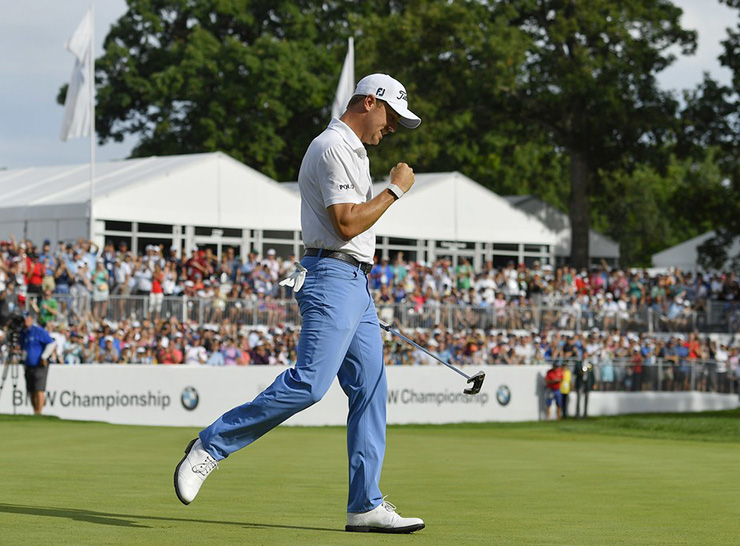 Now Thomas is in the pole position for the Tour Championship thanks to the tweaked format that gives the FedEx Cup leader a two-shot lead heading into the season finale. Thomas will stand on the opening tee at East Lake at 10 under par before hitting a single shot. That means if he plays as well as he did last week, he’ll end up at 35 under! He’ll also be more than $15 million richer.

Andy Ogletree: Meanwhile at Pinehurst, golfers were only playing for the love of the game. And this Georgia Tech rising senior overcame a field of 312, two courses, and a large deficit in the final to claim the 119th U.S. Amateur Championship. With the win, Ogletree took home the Havemeyer Trophy and will get to take a crack at Augusta National next April. 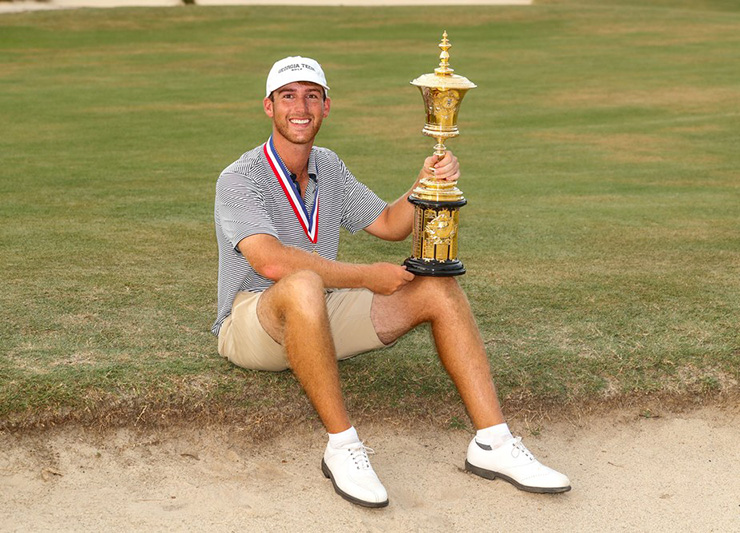 That is going to be one memorable final semester.

Kyle Berkshire: On back-to-back days in the office, a group of us were drawn into watching World Long Drive competitions featuring this freewheeling and free-flowing (Seriously, Tommy Fleetwood has nothing on this dude’s luscious locks) bomber. And both days, Berkshire, ranked No. 1 on the Long Drive circuit, delivered with easy victories. Count me as a new, big fan of this specimen: 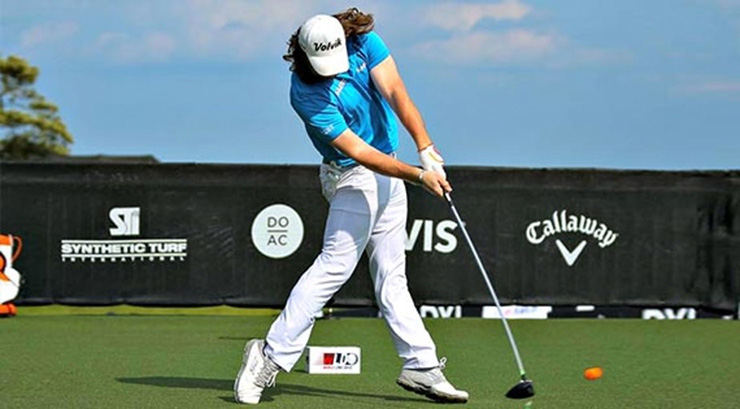 And how about these stats? A career-long competition drive of 492 yards. A career-best ball speed of 229 mph (We go nuts about Cam Champ cracking 190)! What a monster. I just wish I had Googled the results while we were watching and bet on Kyle because I’m pretty sure my co-workers thought the events were live. Oh well.

Tiger’s entrances: Even during weeks in which he posts forgettable finishes, no one makes memorable entrances to a golf course like Tiger Woods:

But as we know, backward hat Tiger is beatable. Backward hat AND tank top Tiger? Good luck, everyone.

Tiger’s season coming to an end: It’s true, Tiger hasn’t done much since winning the Masters in April. In fact, he’s hardly even played. But again, he won THE MASTERS! How is that not worth enough FedEx Cup points to automatically earn him a trip to the Tour Championship?! Forget about the wacky Tour Championship leader board, this is the craziest part of the FedEx Cup Playoffs system! (And for the record, yes, Shane Lowry not getting in as the Open champ is also ridiculous.) Then again, we shouldn’t be surprised. Check out this stat from the AP’s Doug Ferguson:

11 players who didn't win a tour event this season are at East Lake. 22 who did are not at East Lake. Such are the FedEx Cup playoffs. …

That’s pretty wild. But again, nothing is as wild as the fact that one of those 22 winners is the reigning MASTERS champ. Absurd.

Paddy’s streak coming to an end: Hats off to Padraig Harrington for going more than three decades without having his golf clubs lost in transit.

1st time in 32 years of traveling that my clubs have failed to arrive on the way to a tournament. Strange as it was a direct flight and I checked in 3 hours early. How lucky am I @EuropeanTour

That might be more impressive than Tiger’s record 142 consecutive cuts made. Welcome to the real world, Paddy. Actually, Harrington got them back the next day so he’s still living a pretty charmed life.

Four-putting to end a tournament: Poor John Augenstein on the 35th hole of the U.S. Amateur final. That’s a rough way to finish after playing so much great golf throughout a week-long marathon. 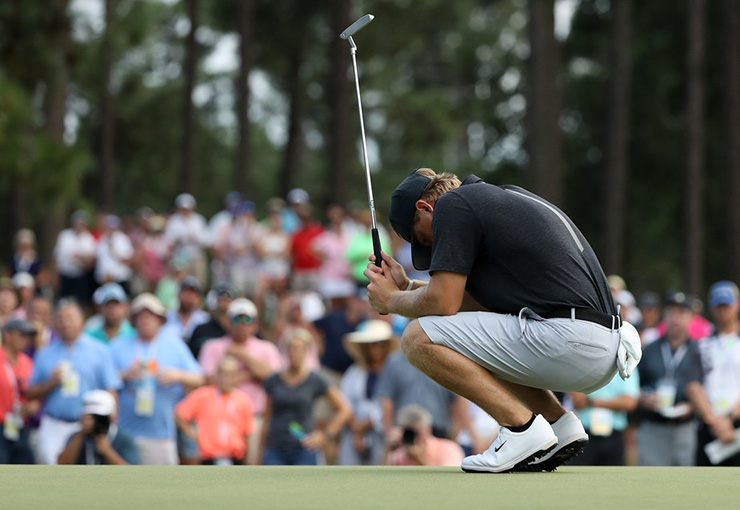 On the bright side, at least he’ll still be joining Andy Ogletree at the Masters next year. Better work on that putting, though, John. Augusta National’s greens aren’t exactly slow, either.

The final 30 remaining in the FedEx Cup Playoffs advance to the Tour Championship, AKA the last event of the season before a new season starts less than three weeks later. Actually, the two-week gap between events is double what the break in the action was last year. Golfers might be able to read an entire book AND clean out the garage this off-season. 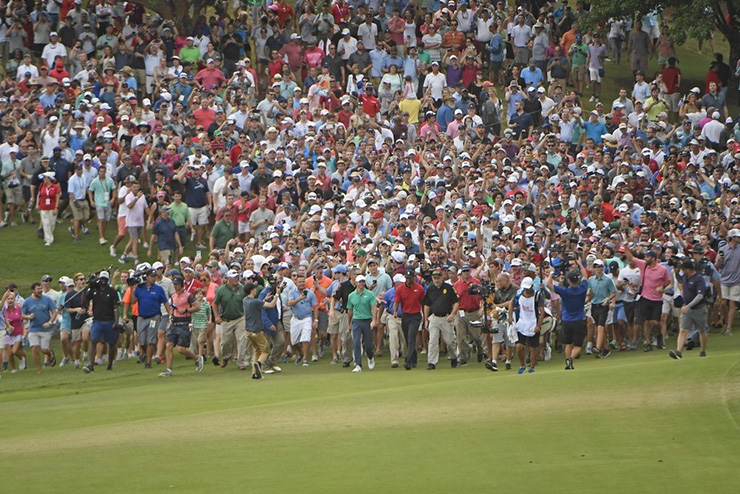 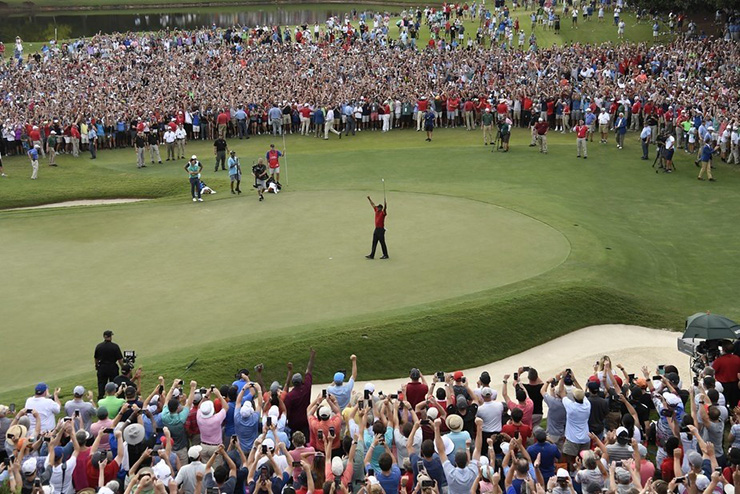 Yeah, that was awesome. In fact, re-live that incredible day with this fantastic oral history of Tiger’s historic march to the 2018 Tour Championship title compiled by our Joel Beall. Not surprisingly, the Roger Maltbie quotes are the best.

—Tiger Woods will be toiling away at the range this week: 1 MILLION-to-1 odds

—Justin Thomas will win the Tour Championship: 9-to-4 odds

—The Tour Championship’s TV ratings will be down from last year: LOCK

“[It was] very special to win my 15th major and get my fifth jacket. Those are special moments and to be able to have an opportunity like that, and the rest of the tournaments I didn’t really play as well as I wanted to, but at the end of the day, I’m the one with the green jacket.” —Tiger Woods

Damn straight you are, Tiger.

It was nice of Justin Thomas to win in girlfriend Jillian Wisniewski’s neck of the woods so she could also be there: 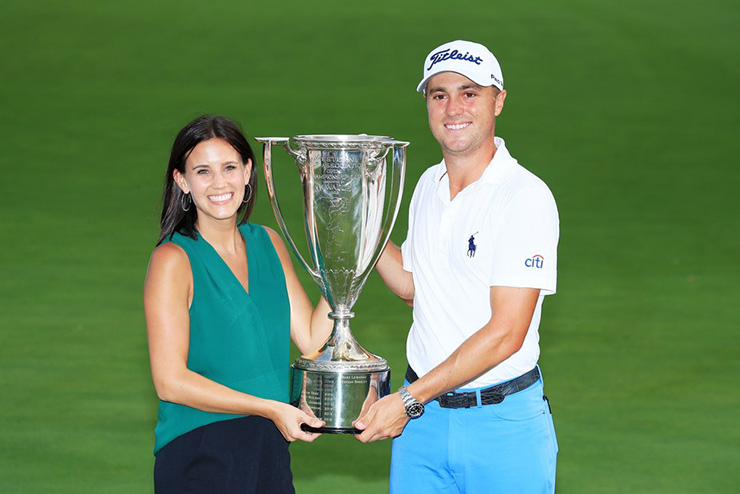 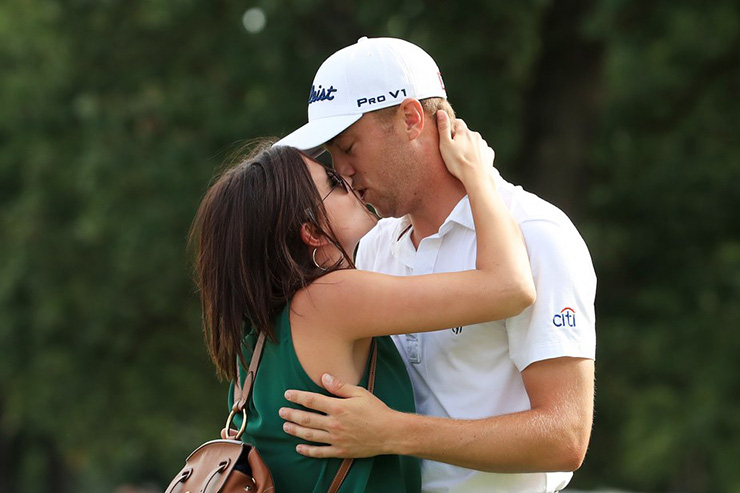 Again, JT is the last of the SB2K crew to get engaged … Just saying. … Speaking of relationships with golfers …

Things my husband will do for Golf, but not for me:
1. Wake up early
2. Improve his flexibility
3. Watch instructional videos to improve
4. Buy clothes
5. Spend 5 hours outside

I am stuck in a love triangle.

I have no clue what Molly is talking about … kidding! Nailed it.

It turned out to be Phil Mickelson’s final event of the season, but Lefty sure went out with a, um, bang. First, he got all feisty PHEISTY with a golf writer:

Thanks for noticing. I did a pro am dinner last night for 100 dealers and customers instead.

We agree one one thing at least

If you come at the (Content) King, you best not miss.

Then Phil doled out dating advice to a Twitter follower, earning the nickname Dr. Phil:

Noooooo!
Take her to a suspenseful movie,hold her hand during scary parts. Physiological response is same for fear and arousal. She will displace fear for attraction towards you. Back in the game. You’re welcome.

Hey, that’s not bad. … And last, but not least, he live-tweeted being evacuated from his hotel after a lightning strike caused a fire:

How’s this for crazy? My hotel was struck by lighting, I was on top floor,we were evacuated and the place is on fire(only thing of mine on fire this week.) I can’t get back into my room and may miss my tee time because I am without clubs and clothes.

EMT’s were awesome! I’m going to make it. Turns out my clubs acted as a fire retardant. Lucky me🤗

Never a dull moment with this guy. Phil, I already named you the PGA Tour’s Content King. You can relax now!

Congrats to Joe LaCava for being inducted into the Caddie Hall of Fame. Now get back to work at the Tour Champions—oh, right. Never mind. . . . Stephen Curry made a seven-figure donataion to re-start the men’s and women’s golf programs at Howard University. I often joke about Steph setting a bad example for “the kids” by throwing his mouthpiece during games, but this is freaking awesome for the kids. Well done. . . . Also well done to the European Tour for announcing a plan to address slow play. Although, if we eliminate slow play from the game, what will everyone have to complain (and write) about? . . . And finally, co-worker Joel Beall got (literally) the worst break on a golf course over the weekend when a playing partner shanked a drive off his golf bag: 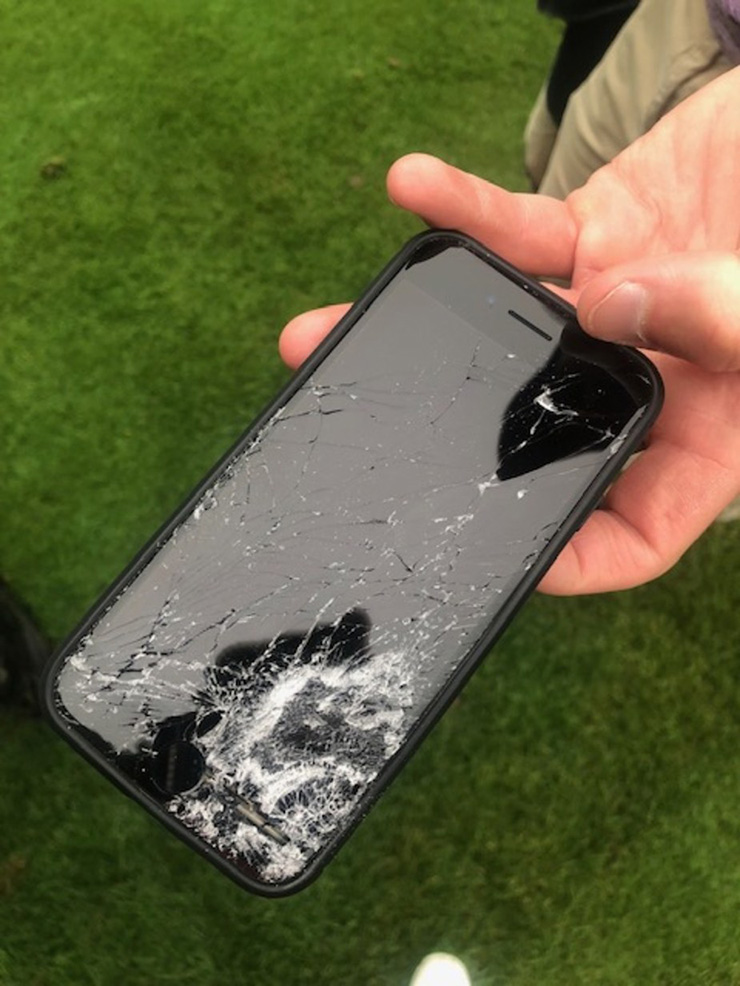 It reminded me that the only time I’ve broken a phone was when a pocket in a rental golf bag/set filled up with water. The morale of the story: Do NOT put your phone in your golf bag. At least there were plenty of snacks for Joel to enjoy in the office while he waited for a replacement.

What happen to Phil next?

Is Tiger looking for a game this weekend?

Are we getting another Famous Amos delivery soon?