Justin Thomas loses three-stroke lead at 18, will enter the final round tied with Danny Lee for the CJ Cup lead 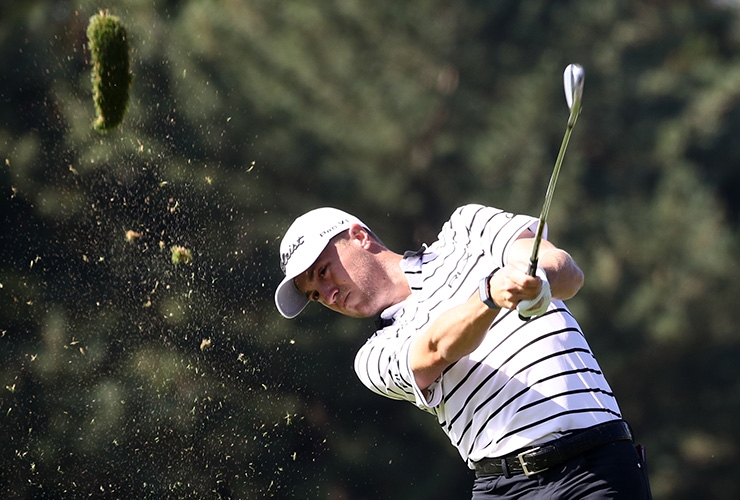 JEJU, SOUTH KOREA – OCTOBER 19: Justin Thomas of the United States hits his third shot on the 3rd hole during the third round of the CJ Cup @Nine Bridges at the Club a Nine Bridges on October 19, 2019 in Jeju, South Korea. (Photo by Chung Sung-Jun/Getty Images)

By John Strege
Justin Thomas took a three-stroke lead into the 18th hole in the CJ Cup @ Nine Bridges on Saturday. But by the time he was done with the hole, he shared the lead with Kiwi Danny Lee heading into the final round.

The three-stroke swing occurred after Thomas hit his second shot from the middle of the fairway way right and into the water that surrounds the green on the par-5 18th at Nine Bridges on Jeju Island, South Korea. He would make a bogey 6, while Lee holed a 30-foot eagle putt from off the green.

Thomas, who is bidding to win the event for the second time in its three-year history, shot a two-under-par 70 and is at 15-under-par 201 through 54 holes. Korean-born New Zealander Lee shot a four-under-par 68 to tie Thomas.

The pair are three strokes ahead of Australia’s Cameron Smith and four strokes clear of South Korea’s Byeong Hun An and Wyndham Clark.

Early on the back nine, An and Thomas were tied at 14 under when they arrived at the par-4 11th hole. But An hit his tee shot into the woods and as he attempted to play out, his ball caromed off a tree and went deeper into the woods. He took an unplayable lie and eventually tapped in for a triple-bogey 7 to fall three behind Thomas. Lee also was three behind by virtue of making a double-bogey at the 10th hole.

Meanwhile, Viktor Hovland, 22, shot a 74 to bring an end to his record 19 consecutive rounds in the 60s.