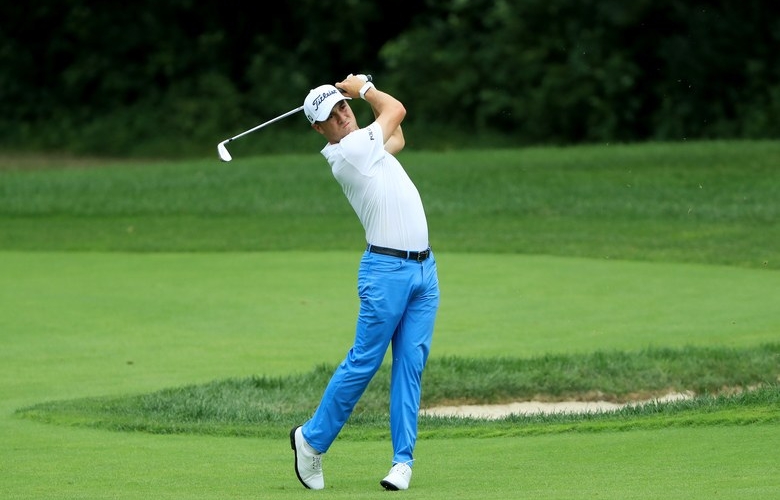 By Christopher Powers
Patrick Cantlay gave Justin Thomas all he could handle on Sunday at Medinah, where Thomas began his final round with a six-shot lead that shrunk to two at the 10th hole. But Thomas slammed the door on the back nine, answering every Cantlay birdie with a birdie of his own. The dagger came at the par-4 15th, when after Cantlay holed his seventh birdie of the round, Thomas poured one in on top to extend his lead to three.

That allowed Thomas to par his way in, if he wanted. But he finished in style, going par-par-birdie to shoot a four-under 68, giving four straight rounds of 69 or better. His 25-under total is the lowest to par in BMW Championship history.

“Patrick made that very interesting,” said Thomas, who won by three after starting with a six-stroke cushion. “It was very difficult to start the day, in terms of the wind and the conditions. I hit the ball so bad to start the day, I just couldn’t—usually I’m pretty good at hitting fairways and greens and I couldn’t hit a fairway, so that was a hard start. But I stayed patient, that birdie on 11 was huge, and that kind of propelled me for the rest of the night.”

Thomas win is the 10th of his career on the PGA Tour, the first since the 2018 WGC-Bridgestone (now the FedEx St. Jude). While a year-long win drought doesn’t seem that long for most players, it felt like an eternity for Thomas, who was winning at a ridiculous rate over the last three seasons.

“I was really nervous today, it’s hard to play with the lead, I was enjoying it though. I was like, this is why you play, it’s like I forgot how hard it is to win. This is why it’s taken this long, this game is so hard, you don’t know how often things like this are going to happen, but we’ve been working hard to get back to it, and it feels great.

This latest victory now puts him in great position to win his second FedEx Cup title in the last three years. He’ll begin the Tour Championship at East Lake at 10-under par, two clear of Cantlay, whose seven-under 65 on Sunday locked up the second spot in the standings.

“It’s going to be new,” said Thomas, adding, “I’m going to go out and play as well as I can and try not to look at the leader board as much as possible. I really love that golf course, but I have to drive it a lot better than I did today, and really this week. You drive it well around there and you can play well, but drive it like I did today and it’ll be tough, so we’ve got a little work to do.”

Brooks Koepka, who looked like a lock to be in the No. 1 spot at East Lake, is now in third following his T-24 this week. He’ll start Thursday at East Lake at seven-under-par, while Northern Trust winner Patrick Reed will begin at six under, as he’s in fourth in the standings. Rory McIlroy, who tied for 19th at Medinah, is in fifth place and will start at five under.

What happens when your PGA Tour event gets cancelled

The PGA Tour made the right decision. Even if it took a while to get there