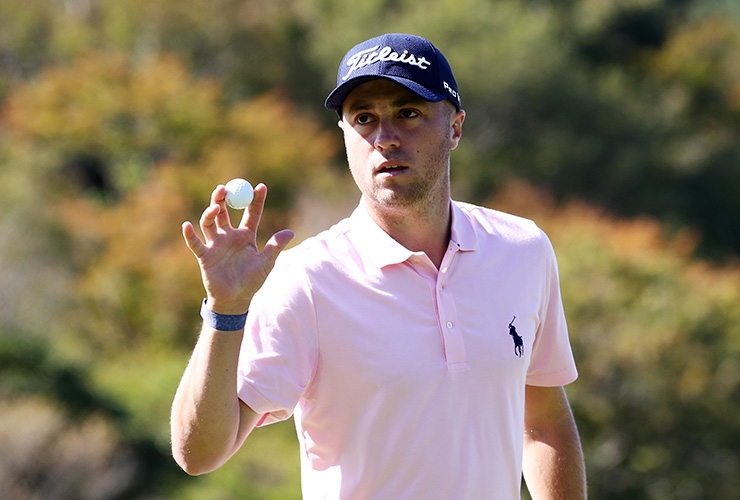 By John Strege
Justin Thomas won the CJ Cup @ Nine Bridges on Sunday, continuing a streak of quality golf resembling how he played in rising to No. 1 in the World Ranking for four weeks in 2018.

Thomas, 26, shot a five-under-par 67 in the final round at the Nine Bridges course on Jeju Island, South Korea, to win by two over Danny Lee. He completed 72 holes in 20-under-par 268, two ahead of runner-up New Zealander Lee who was chasing his second PGA Tour victory, shot a three-under-par 69.

The two entered the final round tied for the lead and were still tied until Thomas holed a 10-foot birdie putt at the 14th hole and Lee bogeyed the 15th and 16th holes.

“I felt like this course provides a lot of opportunities for two-shot swings, so I kept trying to hit fairways and greens and give myself a lot of birdie chances,” Thomas said. “And he just kept getting up and down from everywhere. It was hard to kind of keep my composure and stay patient, but I knew that I was playing great golf and it felt like if I kept doing that, then at least I was going to have a great chance on the last couple holes.”

The victory was Thomas’ 11th in this his sixth season on the PGA Tour. It also was his second win in his last four starts, his first coming in the BMW Championship in August.

Those four starts represent a world-class player at the peak of his game. There was the victory in the BMW, followed by a tie for third in the Tour Championship, a tie for fourth in the Safeway Open, his first start of the new season, and now this, his second victory in the three-year history of the CJ Cup.