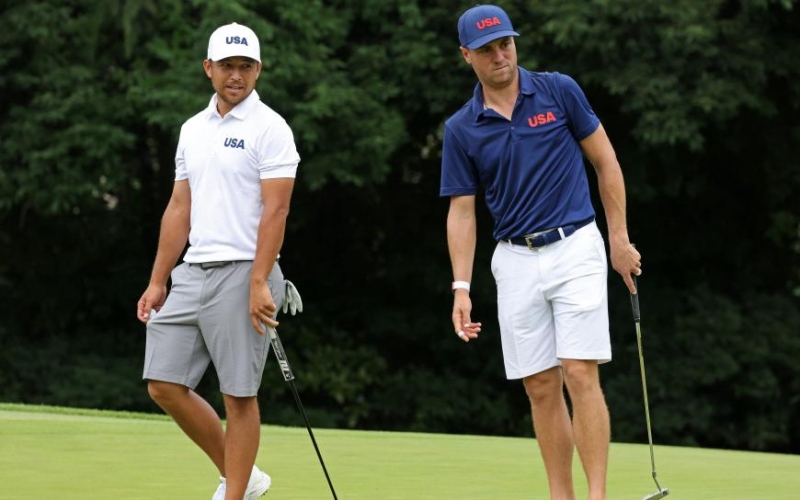 Chris TROTMAN
Xander Schauffele and Justin Thomas play a practice round at the Olympics.

By Shane Ryan
MEMPHIS, Tenn. — Even before the Olympic golf tournament started, Justin Thomas called it “the coolest thing I’ve ever been a part of,” and it’s clear that he enjoyed every part of the experience, from the course to the Olympic Village. It’s no surprise, then, that when one of his countrymen, Xander Schauffele, came away with the gold medal, Thomas felt a little bit of good-natured envy.

“I’m in a house with Xander,” Thomas said on Tuesday afternoon in Memphis, ahead of the WGC-FedEx St. Jude Invitational, “and I checked the medal out. As soon as I saw him, I wanted to see it … it’s really cool. Obviously, I’m very jealous of anybody who’s won any other major or tournaments that I haven’t, but that might have been the most jealous of someone I’ve been. That gold medal is so sick; it’s so cool; it’s so unique.”

This is not the first time Thomas has seen a gold medal handed out for golf. That first view came in 2016, when Justin Rose took top honours in the Rio Games.

“I saw it with Rosie however many years ago,” Thomas said. “We’re both represented by Mark Steinberg, so we had a big thing one night during a major and Rosie brought the medal over, so I saw it then. But being a little closer with Xander and obviously in a house with him this week, I felt a little more comfortable taking it from him and being like, hey, let me see that thing.”

In fact, those are the only two of golf’s gold medals in the world. When the sport was first contested in 1900, medals weren’t handed out to the winners, and if you’ve read the bizarre story of George Lyon, the 1904 champion, you know that his gold medal has been lost to history. Which means that Thomas is one of the few people on earth who is in close proximity (and likely touched) the only golf golds that exist in the world.

Thomas flew into Memphis with several other players on Monday and was noticeably tired in his press conference Tuesday. He made an effort to wake up early in order to reset his body clock as fast as possible, and now he’ll set his sights on this week’s WGC, the FedEx Cup race and the Ryder Cup in September. The finale of the season will be meaningful for Thomas, who, aside from his Players Championship win, hasn’t been overly pleased with 2021. He has five top-10s in 19 starts and is No. 8 in the FedEx Cup race. Thomas’ best finish in a major this season was a T-19 in the U.S. Open.

“Other than one week, really one weekend, I’ve had a very poor year in my mind,” he said. “The results haven’t been there and it’s been the hardest I’ve had to work and the most I’ve struggled, but I’m just working to try to get out of that and I feel like I’ve been a lot closer this last month or so to playing some really, really good golf.”

Still, he admits that no matter how the year ends up, there will be a taste of disappointment that he’ll want to erase in 2022.