Jordan Spieth has another troublesome weekend, a 77 on Saturday and he won’t be playing on Sunday 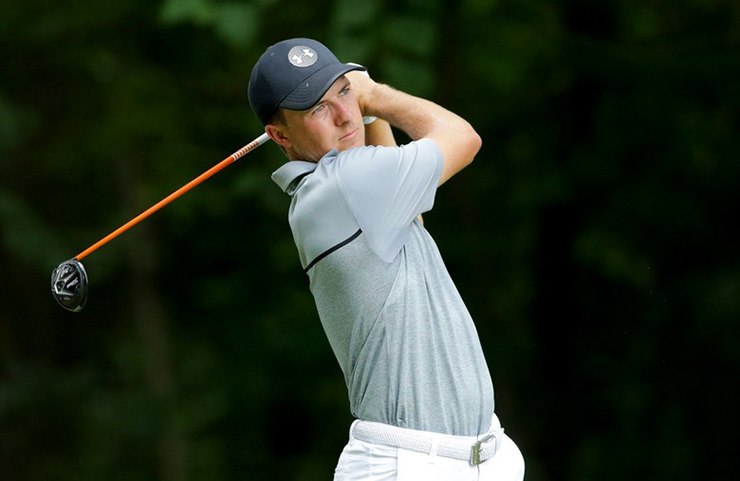 GREENSBORO, NORTH CAROLINA – AUGUST 03: Jordan Spieth hits a tee shot on the second hole during the third round of the Wyndham Championship at Sedgefield Country Club on August 03, 2019 in Greensboro, North Carolina. (Photo by Tyler Lecka/Getty Images)

By John Strege
Jordan Spieth’s contention that he is making progress toward ending a two-year winless skid hit another weekend obstacle on Saturday and he won’t be playing Sunday as a result.

Spieth, who began the third round of the Wyndham Championship four strokes off the lead, shot the highest score of the tournament, a seven-over par 77 at Sedgefield Country Club in Greensboro, N.C., and was a victim of the PGA Tour’s 54-hole cut employed when too many players make the 36-hole cut.

Yet his play in the first two rounds of a tournament has supported his claim that he’s making progress. He was ranked 18th and second in scoring average in the first and second rounds, and he shot 64-67 in the Wyndham Championship to open the tournament.

Spieth’s round on Saturday included three double-bogeys, a bogey and no birdies. He hit only four of 14 fairways, while obviously continuing to struggle with the driver.

“I’m still looking for a way to get the club out in front of me,” he said on Friday. “It’s just behind. And from a club that’s behind, you really only have one ball flight, and if you don’t pull that ball flight off, it can go pretty far offline. It’s something that you don’t really see professionals struggle with a lot. I’ve been trying to bring myself out of a little bit of a hole with it.