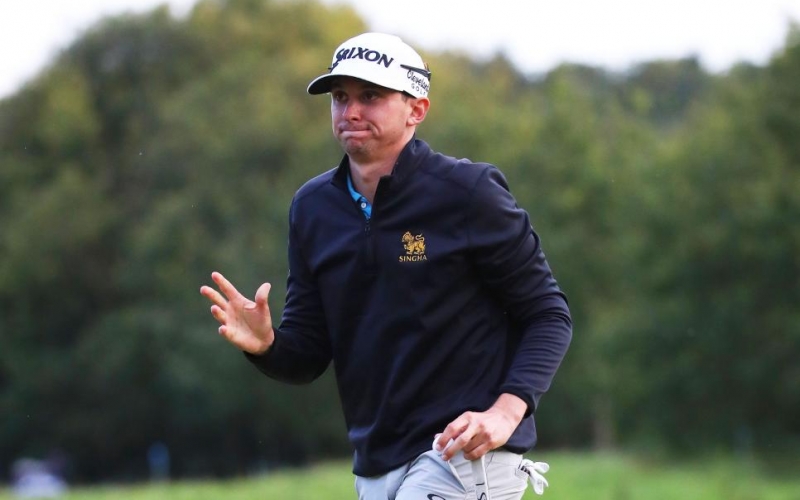 Warren Little
John Catlin reacts to a birdie on the 18th hole at the Irish Open that capped a closing 64 and his second European Tour victory in three weeks.

By John Huggan
Three weeks ago, en route to his maiden European Tour victory in the Andalucia Masters, John Catlin led wire-to-wire at Valderrama. Second time round though, things were a bit different for the 29-year-old American. With just five holes to play in the final round of the Irish Open at the Galgorm Spa & Golf Resort, finishing first appeared unlikely. Having just made what would prove to be his only bogey of the final round, Catlin stood on the 14th tee seven under par, trailing Jazz Janewattananond by two shots and overnight leader Aaron Rai by one.

Not for long though.

Three holes later, Rai was still eight under par, Janewattananond had subsided to six under (courtesy of a double bogey at the short 14th and another dropped shot at the 16th) and Catlin had soared to nine under and a one-stroke advantage. Indeed, birdies at the 15th and 16th were only the start. With a 3-wood from 268 yards on the final hole, Catlin found the distant green and two-putted to put one last red figure on his scorecard and complete a final-round 64. Only Fabrizio Zanotti’s closing 63 was lower in a week marred by fog and frost delays.

Ten under par was the target, with Rai the only realistic challenger. The 25-year-old Englishman, who wears a glove on each hand for every full shot, needed birdies at each of the last two holes to force a playoff.

The 2018 Hong Kong Open winner got halfway to his target when a beautiful approach shot to the 457-yard 17th set up the needed birdie. But after a drive rifled up the middle on the 18th, Rai pulled his second shot into an evil lie in heavy rough left of the green. Two hacks and two putts later, he was no better than eight under par, although, by way of consolation, still alone in second place. Janewattananond tied for third alongside Australia’s Maverick Antcliff.

“It’s hard to describe how special this feels,” said Catlin, the first American winner of this historic title, first played for in 1927, since Hubert Green in 1977 and the third overall (Ben Crenshaw was the other in 1976). “That’s incredible company to be in. It’s an honour to have my name on the trophy with those great players and the likes of Rory McIlroy, Jon Rahm, Colin Montgomerie, Ian Woosnam. Seve Ballesteros and Nick Faldo. So much hard work during lockdown has gone into this moment. It was my goal to win again at the start of the week, so to achieve that is truly special. With five holes to play, I kinda had nothing to lose. I was going after every flag and was able to hit a couple in there close.”

The 3-wood on the 18th was the best of them though, a shot that clinched the €196,690 first prize, a place in the top-20 on the Race to Dubai and, most likely, a first-time spot inside the world’s top-100 golfers. He is thus one big performance away from the top-50 and automatic places in the four majors, a long-held ambition and, for Catlin, “the only level of golf I haven’t played at.”

“That shot was so satisfying,” continued Catlin, a three-time academic All-American during his time at the University of New Mexico. “It was 268 yards to the hole. It was cold and it was damp out there. I needed to hit a big high draw, a shot I know I can hit. But to do it in those conditions and in that situation is hard to put into words. Winning at Valderrama has given me massive confidence. You never know if you are going to win, but winning there has freed me up. I can look myself in the mirror and tell myself honestly that, having won once, I can do it again.”

And so he has.