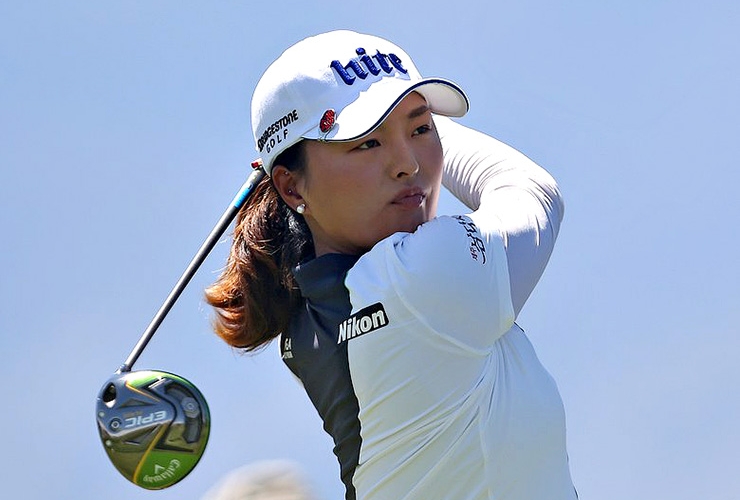 RANCHO MIRAGE, CALIFORNIA – APRIL 07: Jin Young Ko of South Korea watches her tee shot on the fourth hole during the final round of the ANA Inspiration on the Dinah Shore course at Mission Hills Country Club on April 07, 2019 in Rancho Mirage, California. (Photo by Matt Sullivan/Getty Images)

By John Strege
Jin Young Ko arrives at the first tee of every round with a singular goal, and it isn’t winning. She sets out to always play happy, she says. It is an unreasonable expectation for most in a maddening game, but for Ko, these days, ranking her happiness playing golf on a scale of one to 10, she is a 12.

Consistently great golf is a realm occupied only by the elite, and her record this year argues strongly that she has joined the club. The latest evidence is her victory in the ANA Inspiration on Sunday, and though she did take the customary winner’s leap into Poppie’s Pond by the 18th green of the Dinah Shore Tournament Course here, it was unnecessary. She has been making a considerable splash for a while now.

Ko, 23 and a South Korean took a one-stroke lead into the final round, shot a two-under par 70 and won by three. M.H. Lee, who closed to within a stroke at one point, finished second, while Lexi Thompson, on the strength of a closing five-under par 67 finished third. I.K. Kim, who began the day one back of Ko, shot a 74 and tied for fourth.

It was a textbook-closing round for a leader. She hit 12 of 14 fairways and 14 of 18 greens in regulation and encountered very little stress along the way. Not that she ever stresses much. An even keel is a 15th club in her arsenal.

She revealed nothing of an emotional nature until she holed a 15-foot birdie putt for emphasis on the 18th green, then immediately broke down crying. She tearfully thanked God, her parents and grandfather.

It was not a surprise, this victory. She learned to win on the Korean LPGA Tour, amassing 10 victories, the last of them the LPGA KEB-Hana Bank Championship in 2017, which also doubled as a first victory on the LPGA, earning her LPGA membership.

She was the LPGA’s rookie of the year in 2018 when she won the ISPS Handa Women’s Australian Open and finished in the top 10 13 times.

She has a swing suitable for framing, but more importantly one that has no trouble repeating, whatever the situation. This explains why she ranked 13th in driving accuracy entering this tournament and fourth in greens in regulation. Throw in a reliable putter and you have a prescription for success.

It might have helped, too, that she had a caddie, David Brooker, who is comfortable when his boss is centre stage in the cauldron of a Sunday afternoon, notably in this tournament. Brooker caddied for Grace Park when she won here in 2004 and for Lorena Ochoa when she won in 2008.

Ko, meanwhile, became the 15th South Korean to win a major championship in a lineage that began with Se-Re Pak and her victory in the McDonald’s LPGA Championship in 1998.

“It’s a really great honour for me,” she said. “So many Korean players made a great job in this tournament. So really honoured to be here.”

Incidentally, Ko has a dog whose name reportedly translates to Awesome, though one Internet translation produced Great.

Awesome or Great, either would adequately describe the dog’s master these days.