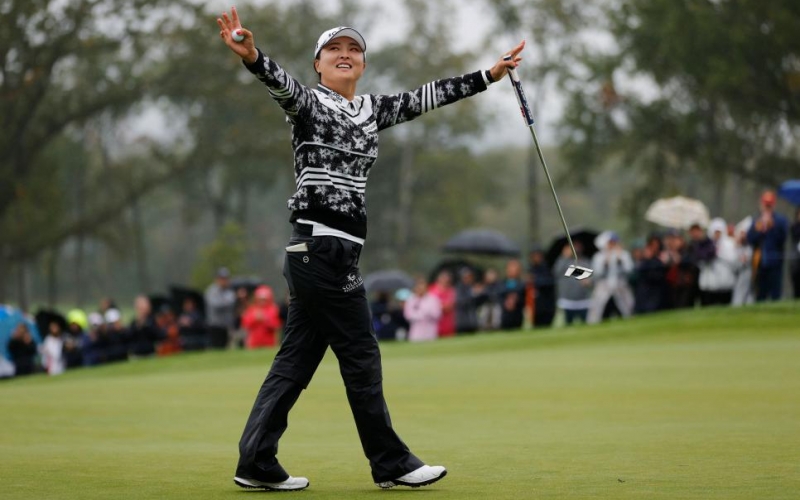 Sarah Stier
Jin Young Ko reacts after sinking her final putt on the 18th hole to win the Cognizant Founders Cup on Sunday.

By Keely Levins
The 2021 LPGA Tour season seems like it has belonged to Nelly Korda—her milestones including three wins (and her first major), a gold medal at the Olympics and climbing to World No. 1 for the first time in her career.

But Jin Young Ko’s dominant performance at the Cognizant Founders Cup on Sunday, a four-shot win over Caroline Masson at Mountain Ridge Country Club in New Jersey, serves as a reminder that the race for LPGA player of the year is far from over with three events left.

Ko, the World No. 2, came into the week talking about fatigue. The Founders Cup was the fourth straight tournament for the 26-year-old South Korean, and she said she was starting to feel the effects. Her play would lead you to believe otherwise, however. The most greens she missed in any round came on Sunday, when she missed just four. Her 18-under 280 total, kick-started by an opening-round 63 the propelled her to the wire-to-wire victory, earning her $450,000 and pushing her past $7 million in career LPGA earnings.

In the final round, played in cold, rainy conditions, Ko shot 66, her 14th consecutive round in the 60s, tying the LPGA record set by Annika Sorenstam in 2005 and equalled by So Yeon Ryu in 2016 into 2017. It isn’t the first time Ko has found herself in the company of golf’s greats in record books. In 2019, Ko broke Tiger Woods’ record for consecutive holes without a bogey. She played 114 straight holes at par or better, surpassing Woods’ record by four.

This win was Ko’s third of 2021, her first two coming at Volunteers of America Classic and the Cambia Portland Classic, and the 10th of her career, making her just the fifth Korean to claim double-digit LPGA titles. The only other player to win as many times this season is Korda. Both players are in good form, suggesting the LPGA’s player-of-the-year race isn’t likely to be decided until the final week of the season.