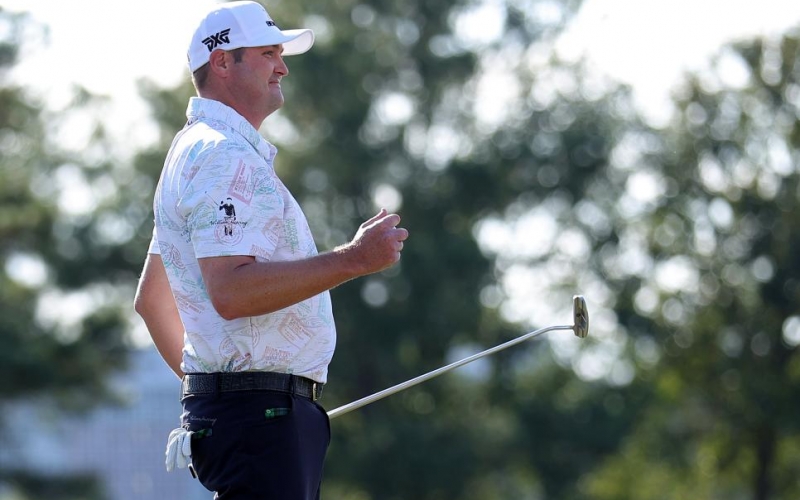 By Dave Shedloski
Jason Kokrak was born in Canada, raised in Ohio, and has made himself at home in Texas. He is also learning to reside atop PGA Tour leaderboards.

Combining a hot putter with killer instinct and killjoy indifference, Kokrak continued his late-blooming surge thanks to a late burst of birdies and captured the Hewlett Packard Enterprise Houston Open on Sunday for his third PGA Tour win in his last 38 starts – and his second in the Lone Star State this year.

Kokrak fired a closing five-under 65 on the strength of four straight birdies on the inward nine at Memorial Park Golf Course and surged past two sentimental favourites in Scottie Scheffler and Martin Trainer for a two-stroke victory. Scheffler, a Dallas native in search of his first PGA Tour title, and Trainer, emerging unexpectedly from a horrendous slump, each held the lead on the back nine before Kokrak took over.

And to think, Kokrak contemplated withdrawing after a practice round that felt more like malpractice. But a remote range session with his swing coach Drew Steckel – a sign of the times amid the pandemic – did wonders for the 29th ranked player in the world. He stabilized his lower half instead of “dancing” over the ball, as he put it, and waltzed off with $1.35 million.

At 10-under 270, Kokrak finished two strokes in front of Scheffler, the third-round leader, and Kevin Tway. Scheffler, who still led at the turn but bogeyed three times coming home, shot 69 for his second straight top-5 finish, while Tway, one of five players who began the day a stroke behind Scheffler, posted a 68.

“It’s very special because I was struggling with my game at the beginning of the week,” said Kokrak, 36, playing in just his third event of the fall schedule. “I guess you can call me an underdog, but the last couple years I’ve played some pretty solid golf, so I wouldn’t exactly say that I’d be the underdog going in. I guess this week I would be because my game was not in top form and I definitely made the best of it.

The biggest downer, which in the past might have relegated him to also-ran status, was his completion of the weather-delayed second round early Saturday. Six under par through 11 holes when play was suspended Friday by darkness, Kokrak returned Saturday morning but forgot to wake up his game. Amid breezy and cool conditions, he played his remaining seven holes in seven over par, including a triple bogey at the last, to shoot 71 and fall off the pace. But he was able to regroup for a third-round 66 and then hung around on Sunday while those in front of him failed to pull away.

That included Trainer, ranked 1,310 in the world and owner of just one paycheck in his last 18 starts. He got to nine under and was ahead all by his lonesome when he guided home an excuse-me 71-foot birdie putt on the par-3 11th hole to nose ahead of Scheffler, who bogeyed 10 and 11. But Trainer couldn’t answer Kokrak’s birdie barrage and bogeyed the last two holes to end up T-5. Still, he earned $289,687, nearly double his earnings of $149,766 in the last two years combined.

Kokrak, who won the Charles Schwab Challenge at Colonial in late May, started his rally with a 12-foot birdie at the par-4 13th, which, he said, “gave me a little confidence.” A 23 footer at the 513-yard par-4 14th – just one of three birdies converted there – was crucial given that Scheffler and Trainer both bogeyed what was the most difficult hole of the day. Then he rolled in two more and, now having some experience with winning after going 233 starts before his first victory last fall in Las Vegas, played safe and smart and closed it out.

It might be difficult to understand how a guy who languished as a solid but largely unknown member of the PGA Tour is now a three-time winner, but Kokrak is long enough off the tee to compete in this power era and he finally has a putter he can count on. He ranked sixth in strokes gained-putting last season, a massive jump from 151st the season prior and one reason he was on the radar for a spot on the U.S. Ryder Cup team this fall.

At Memorial Park he ranked third for the week on the green, and on Sunday he finally took advantage of an approach game that produced 15 greens in regulation. He seemingly came out of nowhere, but that has been Kokrak’s story the last 13 months. Only Patrick Cantlay has more wins since the beginning of last season.

“I’ve always been a slow learner … [but] once I learn something, I normally get pretty good at it,” he said.

With the win, Kokrak was projected to move up to a career-best 22nd in the world. Yeah, he’s getting pretty good.