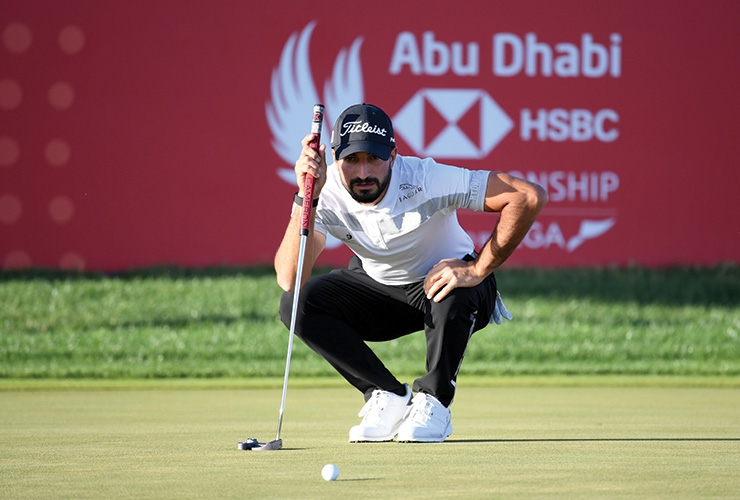 Ross Kinnaird/Getty Images
Laporta lines up a putt on the 18th green at the end of the third round of the Abu Dhabi HSBC Championship on January 18, 2020.

By John Tully-Jackson
With a chequered European Tour history, few gave 36-hole leader Francesco Laporta much chance of hanging onto the big names on moving day at the Abu Dhabi HSBC Championship.

The 29-year-old clearly didn’t read the script that had him going in reverse on Saturday in similar fashion to the last time he held a halfway lead, way back at the 2016 Trophée Hassan II. Then Laporta faded to a share of 22nd, still his best finish in the big league.

But maybe, just maybe, Laporta is ready this time. A steady three-under-par 69 on Saturday, to go with his sizzling 63 in the second round, hints so.

With a share of second place alongside Bernd Wiesberger and just a solitary shot behind tour veteran Lee Westwood’s -14 lead, the Italian journeyman certainly has a chance to prove the doubters of his ability to hang tough wrong again.

“I’m a different player, I was younger four years ago,” Laporta said of his Morocco slide.

“I was coming from a bad year and then I went to Tour School and it was fantastic to get my card, but I wasn’t ready. I feel more ready now and just try to enjoy my game.”

And enjoy it he should. With only one bogey scratched into his scorecard in the last 36 holes, something is going right. That something might just be Laporta’s putter which was hot again on the National’s billiard table greens Saturday.

One of his easiest putts of the day came on the 16th where, having left his tee shot 30+ yards behind his playing partners Matthew Fitzpatrick and Rafa Cabrera Bello, Laporta launched a mid-iron to a blind pin in more ways than one.

“I hit the ball pretty straight but then I lost it in the sun. People clapping, I thought, okay, must be good, and when I got to the green it was very close.”

The tap-in birdie preceded his monster putt at 17, and with a solid closing par, Laporta feels the door is open for his maiden European Tour victory in his first Rolex Series event.

“Yeah, the long putt on 17 was amazing. I made so many putts yesterday, and my putting was pretty good also today. I made some good pars and hopes of another good Sunday on the greens.

The drive down Magnolia Lane is shorter than a lot of tee shots on tour.