Inventors of E-Z Lyft, the golf-ball retriever that clips onto a flagstick, reflect on their product’s surge in popularity By Brian Wacker
It was a mid-April Thursday afternoon, and Dave Taylor and Roger Hood were glued to their computer screens, hoping it would update with the very first order for the Golf Ball E-Z Lyft, a contraption the two men from upstate New York designed to make retrieving a golf ball from the hole as easy as raising a putter a few inches.

The beauty and effectiveness of the device is in its simplicity: A small rod is attached to the flagstick and a metal saucer at the bottom of the hole, and it is raised and lowered by a hook-shaped arm that is a handful of inches above the ground.

A great success story, born from ingenuity and invention, made possible by the perfect confluence of events. Specifically, after our global pandemic made reaching into a golf hole a questionable act for many, then a tweet and video from Barstool Sports dubbing the product “the greatest invention since the wheel,” and along with it nearly 4,000 retweets and more than 30,000 likes.

The cups are back under the surface! We are excited to provide the EZ Lyft system to our members. LET’S PLAY GOLF! pic.twitter.com/NmlbQGhIuo

Funny thing is, it was never supposed to be this way.

Taylor, a 48-year-old engineer, and Hood, the 56-year-old owner of a small manufacturing company in Lockport, N.Y. (population 20,305 and less than 20 miles from the Canadian border in the northwest corner of the state), have been friends for 25 years. They play golf together three times a week, usually at Niagara Falls Country Club, and are solid sticks—Taylor is a 5-handicapper, Roger a 9.

Last year, when the new Rules of Golf went into effect and allowed golfers to putt with the flagstick in, the two men noticed an unintended consequence: Recreational players were sometimes damaging the edge of the hole as they reached into the cup to fetch their ball. That’s when the proverbial light bulb went off.

“It was Dave’s idea initially,” Hood concedes. “We talked for a while, came up with a concept and built a prototype. Then we were looking at ways to bring it to market. I thought we could sell a few, keep some people busy. There was no urgency…until the end of March [of this year].”

So the two got to work. 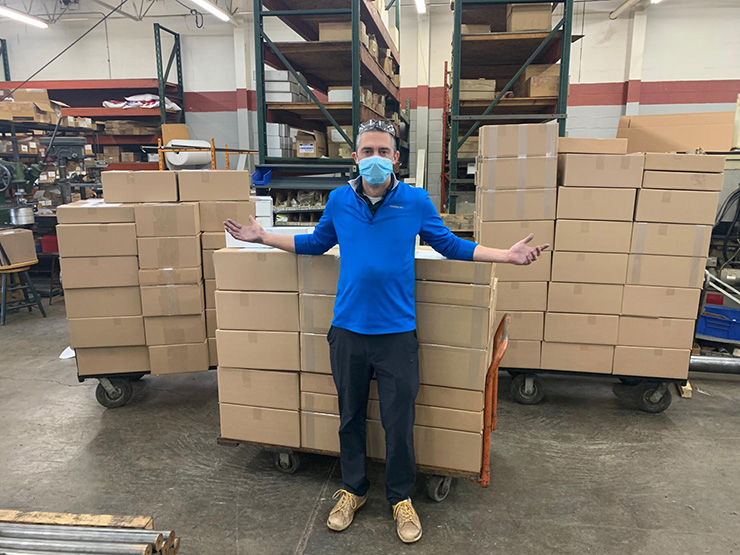 E-Z Lyft co-founder Dave Taylor pauses to reflect on the boom in popularity in his golf-ball retrieving device.

Hood’s company, Niagara Precision, is a small machinery that he started in 1989. A shop of 17 employees, his team creates various mechanical parts for everything from the medical field to the aerospace and defense industries.

When COVID-19 hit, millions of employees across the country lost their jobs, workers were furloughed and hundreds of thousands of businesses were forced to close, plunging the economy into an abyss. At Niagara, however, the opposite was true. Hood’s business was deemed essential and was allowed to stay open, albeit under stricter guidelines.

There were other hurdles Hood and his workers had to overcome, too, as they tried to crank out the new product.

“Getting materials during the pandemic was a challenge,” Hood said. “One of our shipments went to Niagara, Canada, instead of Niagara, N.Y. Because it was across the border, we couldn’t get it back. Another one ended up in Erie (Pa.), but luckily I have a friend who has a trucking business, and he was able to pick it up and bring it here.

“We were operating 24/7 for three straight weeks before we could get caught up to where we were able to ship the product the day after it was ordered. I wasn’t complaining, though.”

Indeed. Of the more than 16,000 golf courses in the U.S., Hood said the EZ-Lyft has already found its way onto over 1,200 of them. That includes Melreese Country Club in Miami.

When golf courses in South Florida reopened at the end of April, they were allowed to do so only under strict guidelines—one of them being that players weren’t allowed to reach into the cup to grab their ball as a way to limit the potential spread of coronavirus. Other courses in the area used a pool noodle to fill the hole or simply raised the cup above the ground. At Melreese, director of operations John Reed instead ordered two 18-packs of the EZ-Lyft ($495 a piece).

“Golfers really hate the noodles or the cup half out,” Reed said.

Reed also liked the fact that the parts—mostly metal and easily adjustable—have proven durable. He’s had to replace only a few of them in the thousands of rounds that have been played at the highly popular muny over the past two months.

Meanwhile, Taylor and Hood haven’t stopped tinkering. Recently the company released its EZ Lyft Pro ($595 per 18-pack), which clips onto the flagstick with no tools required and features a free-floating arm.

“Because we’re avid golfers we saw one of the drawbacks of the original was that the rod was in a fixed position and that if a putt hits it too hard it can bounce back out of the hole,” Hood said.

The duo has also been socially conscious with their efforts. For every unit sold, a portion of the proceeds goes to the First Tee of St. Petersburg. To date, they’ve generated more than $20,000 in donations.

The AJGA also plans to use the device in all of its tournaments this year, Hood says, and EZ-Lyft plans to make the product available to courses in Europe and Australia in the coming weeks.

“It was quite a surprise for us to see how this has taken off,” Hood said. “It was the right place, right time, I guess. But this is something that has become popular at a lot of courses and could become permanent.”