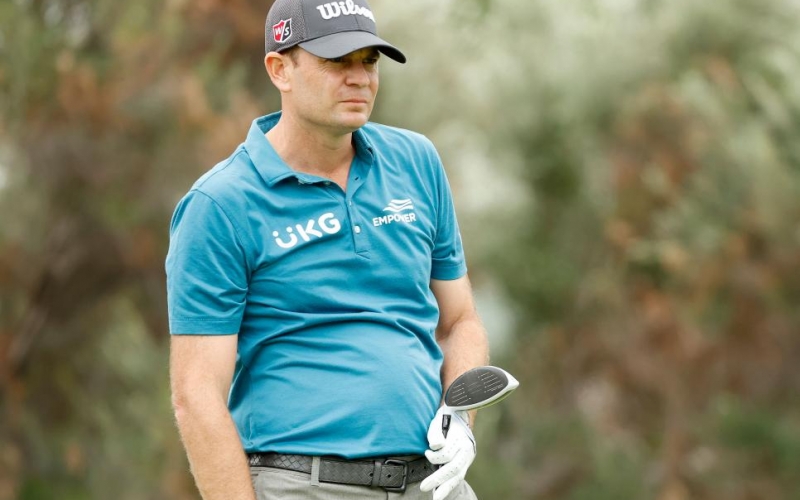 Cliff Hawkins
Brendan Steele couldn’t get comfortable on the back nine Sunday at Waialae, costing himself the Sony Open title for a second straight year.

By Brian Wacker
HONOLULU — New year, same outcome. The only difference this time: Brendan Steele didn’t even make it into a playoff.

For a second straight year, the 11-year PGA Tour veteran had the lead on the back nine at the Sony Open in Hawaii. And once again he left Waialae Country Club without the trophy, finishing in a disappointing tie for fourth after shooting a one-under 69 Sunday to finish two back of winner Kevin Na.

In a week where low scores were mandatory, Steele’s final-round number was the highest of anyone in the top 10 on the leader board.

“Obviously super disappointed,” Steele said afterwards. “Playing really well, feeling really good about it. Thought I hit a perfect shot on 10. Got a weird lie there, totally changed the momentum. Every single shot I hit after that ended up with a weird lie, one foot through the fairway, really struggling after that. Completely changed the momentum and super bummed.”

Steele, who began Sunday’s final round with a two-stroke lead, saw his advantage cut to one after he struggled to find momentum early, opening with six straight pars. Still, he birdied the seventh and added a 20-footer for eagle at the par-5 ninth to create a three-shot cushion going into the back nine.

On the 355-yard par-4 10th, Steele opted for driver. His ball landed on the edge of the left fairway bunker then popped out, resulting in awkward stance above the sand that left Steele with a difficult 60-yard pitch. His next shot came up 85 feet short and he three-putted from there for bogey.

“I think if I lay up 10, I think I win the tournament,” the 37-year-old three-time tour winner said. “So we made a mistake there, and it’s unfortunate. It’s as good as I can hit a shot, so if that doesn’t get over the bunker, then I can’t get over it. Just a mistake and kind of changed everything and everything was hard after that.”

Especially as he struggled off the tee. Steele hit just one fairway the rest of the day, never giving himself much of a chance. After a bogey on the 14th, his lead was gone. One hole later, Kevin Na stuck his approach to five feet to set up a third straight birdie took the lead for good.

Steele still had a chance to tie the lead on the par-3 17th, however, but his putt from just inside 10 feet never touched the hole. It was his only look at birdie from inside 30 feet on the entire back nine.

Sunday marked the sixth time that Steele has held a 54-hole lead on tour. Only once has he gone on to win

“You don’t [get these opportunities often],” he said. “You just try to pick yourself up next week and try to give yourself another chance. I’ve seen a lot of things in my 11 years out here. And I’ve closed well, I’ve closed poorly, I’ve closed in the middle and it doesn’t get any easier. It’s always really hard, and I think anybody out here will tell you that no matter how many times they have won.

“I think you just have to really take some positives out of this; hard to see for me right now and just go and try to put myself right back there next week.”