Sharjah favourite: ‘I’m not a Langer or a Monty but being Broady has worked quite well’ 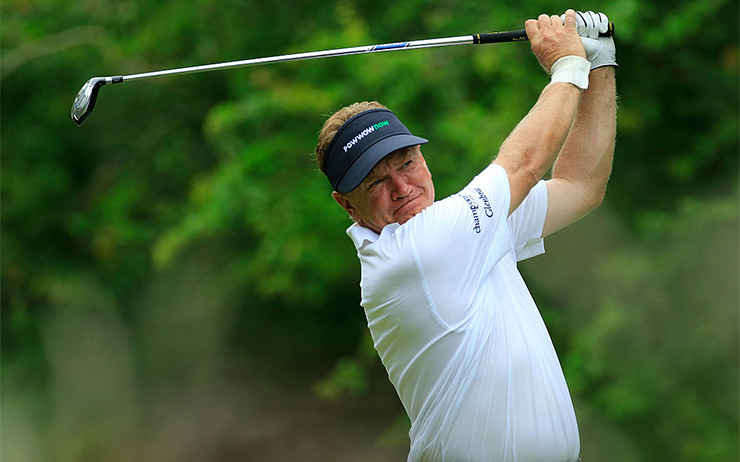 Sharjah Golf & Shooting Club is nearly 7500km from Royal Porthcawl in Wales and the European Senior Tour’s season-opener this week a long way removed from the Senior Open Championship in July. But they’re intricately interwoven in Paul Broadhurst’s world.

The 51-year-old Englishman will have a figurative eye on the defence of his senior Claret Jug when he begins the defence of the senior tour’s moneylist title at the inaugural $425,000 Sharjah Senior Golf Masters starting Thursday.

Broadhurst tees it up with 2016 rookie-of-the-year Magnus P Atlevi and former Ryder Cupper Barry Lane in the first European Tour event to be played in the emirate and on a nine hole course anywhere and is hopeful the good “Broady” turns up for the auspicious occasion.

“I want to play well and compete, but I’m not one of those guys who can guarantee it week-in, week-out. I’m not a Langer or a Monty, I’m a Broady,” said Broadhurst who pipped American Scott McCarron by two shots in the Senior Open at Carnoustie and captured €399,285 in winning the John Jacobs Trophy as European Senior Tour player-of-the-year.

“That’s been working quite well these last 18 months, so long may that continue.

“It was a pretty incredible 2016 for me and it’s going to be tough to follow that but I’m up for the challenge and I’m here to try win this week. I want to finish as high as I can on the Order of Merit, but I know I’m going to have to do well here and at the Majors to have a chance of winning it.”

Broadhurst has been campaigning in the UAE since the first Dubai Desert Classic in 1989. He was part of the advance party which played a promotional pro am last year to announce Sharjah’s inclusion on the European Senior Tour schedule and after several loops of the Peter Harradine-designed course this week is convinced the event will be decided on the greens. 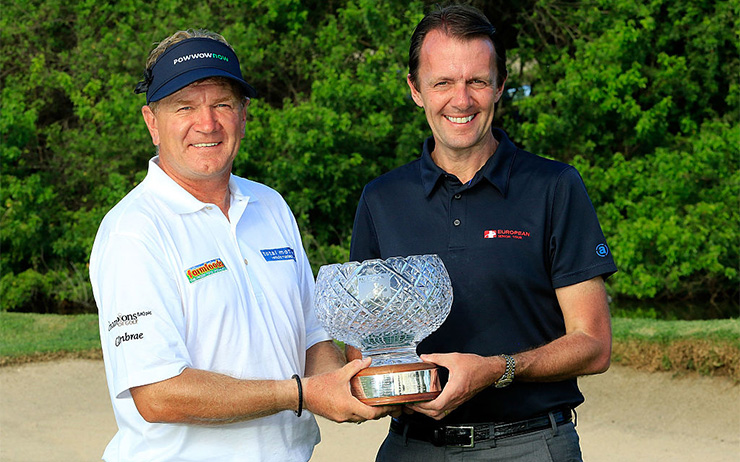 Paul Broadhurst is presented with the John Jacobs Trophy by David McLaren, Head of European Senior Tour, after the final round of the MCB Tour Championship last December

“This week will be a bit of a putting contest, we really need to master these greens to get some low scores,” the former Ryder Cupper said.

“There are a lot of good players here and you’ll need to shoot a low score to win. There are a few new additions, and it’s the younger guys you have to watch out for.”

Brendan McGovern, winner of European Senior Tour’s 2017 Q-School will strike the first shot of the championship in a group including fellow graduates Clark Dennis and Peter Wilson.