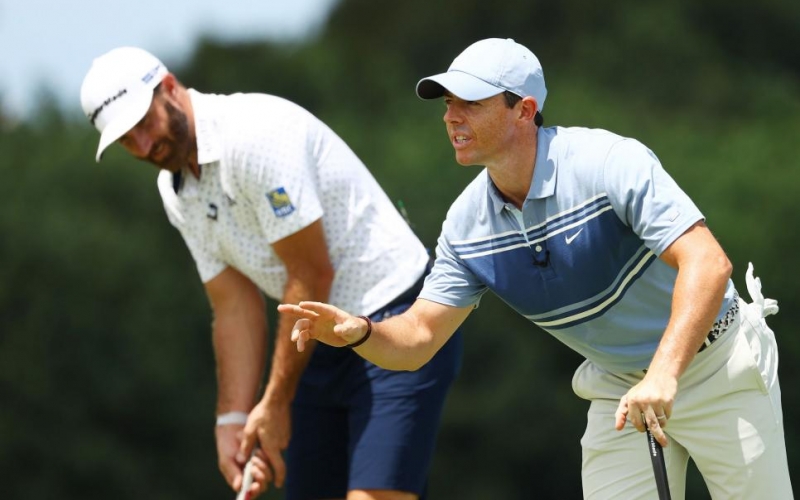 Mike Ehrmann
Rory McIlroy put his foot in his mouth in front of Dustin Johnson on Wednesday at the CJ Cup, but proved a point about how tough it is to win on the PGA Tour.

By Ryan Herrington
As Rory McIlroy prepared to play in his first event of the 2021-22 PGA Tour season, the CJ Cup at The Summit Club in Las Vegas, he was asked to assess the one just finished. In the process, the questioner highlighted McIlroy’s victory at the Wells Fargo Championship in May and his seven top-10 finishes.

“Yeah, last season was OK in parts and, you know, thank you for highlighting the good stuff.”

The inflexion in his voice carried with it the knowing tone that there was also some not good stuff. McIlroy struggled to close the door at several events he was in contention, sought the help of a new swing instructor to help with his swing, dropped out of the top 15 in the World Ranking for the first time since 2009 (he’s back to No. 14) and finishing in the top 10 in just one major in 2021.

Suffice it to say, McIlroy is ready to put the “superseason” in the past but does so knowing full well that the PGA Tour the 32-year-old Ulsterman is playing right now has a depth that makes dominant stretches like the one he experienced from August 2012 to September 2014—in which he finished first six times, won three majors and had 22 top-10 finishes in 39 starts—difficult to conjure.

“It’s tough to win, right? I’ve had a couple of seasons where I’ve won four and five times and that’s really … I think nowadays that’s an achievement,” McIlroy said. “The seasons of sort of 10 wins like Vijay [Singh] and Tiger [Woods] obviously multiple times, I don’t know if we’re going to … maybe I’ll be wrong, but I don’t know if we’re going to see them again. I think a really good season nowadays is sort of … three wins is exceptional, two wins is very good, and then anything like above three, you’re the best player in the world at that point.

Looking for another way to show just how deep is the PGA Tour? As McIlroy explained it, he stumbled upon it in embarrassing fashion on Wednesday morning in Las Vegas when he was having breakfast at the same table as Dustin Johnson.

Indeed, while DJ famously has won a PGA Tour event in 14 consecutive seasons, he has not won one in the 2021 calendar year. Without a win in the last few weeks of the fall season, Johnson will miss the event at Kapalua Resort for just the second time since 2009.